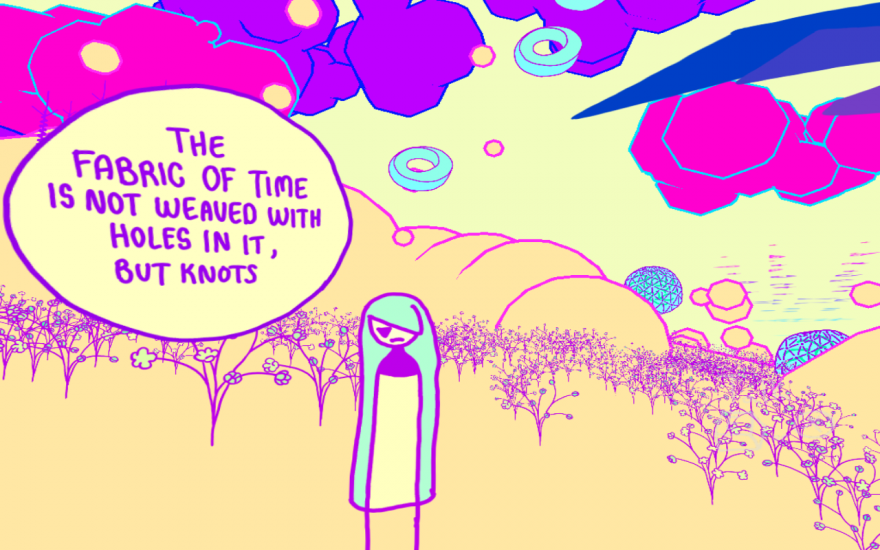 It’s telling that the first few steps I ever took in Gardenarium sent me careening off the pink cloud I had only just started to familiarize myself with. I fell through white, empty space for what felt like a long while. Until, finally, I realized I was already back on solid ground—the world inverted on its head without my noticing.

Bending perspectives, dimensions, and even its own structure

Obviously, this surrealism is Gardenarium‘s main form of communication with the player. It bends perspectives, dimensions, and even its own structure to force you to question its boundaries up until the very end. But, even though the game supposedly casts you as a “stranger” in this psychedelic cloud island, many parts of this soft planet and its complex storybook characters feel inexplicably familiar.

In truth, I am something of a tourist, incessantly snapping pictures (screenshots) of its beauty like I’ll never catch a glimpse of it ever again. But in talking to each character, a sense of home is cultivated, ridding you of any detachment so much that you forget to ask questions as the internal logic of the narrative world convulses around you.

The first character to greet you in Gardenarium is a nihilistic young lady of immeasurable beauty and sadness. Possessing the sweet looks of Princess Bubblegum from Adventure Time, and language that seems more akin to Nietzsche, she sets the tone for the whole game. She’s odd— contradiction embodied. And so very human for it. She reminds you of those unfortunate people in grade school who were too smart to be well-liked by peers, but should have been.

Princess Nietzsche declares that you have entered a quest of biblical proportions where your one and only objective is to “win.” Win what or against who? Princess Nietzsche doesn’t have time to explain those details to you. And who cares, anyway? The impossibility of the quest ahead of you (to reach the top of the cloud and find a mysterious and frightening place called the Depot) guarantees you’ll never succeed. Or so the cynical Princess says.

Of course, this causes an innate curiosity to stir inside you, gazing upon this world of inverted perspectives and visual vignettes. You must conquer—must win—whatever it means, and regardless of the challenge. As if anything could ever stop you from heading out further into this whimsical landscape.

Luckily, the challenge of Gardenarium seems mostly internal, as you fight to get your bearings in constantly shifting spaces. The pastel color schemes change every time you pick up a “collectable” item: empty soda pop cans that litter the ground. From beat to beat, the tone of the game switches seamlessly too, between stoner humor, beatnik poem, and Willy Wonka and the Psychedelic Meta Dream Factory. The interactions with different characters are central, yet still peripheral. You never lose sight of The Goal: whoever or whatever awaits you atop the mountain calling down, coaxing you to move forward with each eye-catching space.

Given the rich vibrancy of its visuals, some might do Gardenarium a disservice by labeling it simply and neatly a trippy, stoner-type game. But, though it borrows from the laid back and accepting vibe of such circles, there’s much more to walk away from this game with than that.

a genuine sense of discovery

The openhearted sincerity of the writing style imbues the world with a storybook spirit. I stayed with my favorite characters long after I’d cycled through the extent of their dialogue—just to hear their stories again and again. The simultaneous transparency and abstractness feeds your curiosity, as you mull over each sentiment, fitting their perspectives into the world around you—figuring out your own place among the colorful idiosyncrasies.

I suppose that kind of innocent wandering might be construed as stoner-like, but it feels much purer than that. Gardenarium is childish and unassuming in spite of the often self-aware nature of trippy art and games. The nostalgic pastel palette conveys a genuine sense of discovery, the flowers that blossom under your feet encouraging you with every every step.

It’s more than a pleasant high. It’s a convincing case for the importance of maintaining imagination—no matter the impossible challenge. You are summoned to the intimidating Depot, but that doesn’t necessarily mean you have to lose your soul (as a Nietzsche-esque princesses might have you believe). Instead, you go to win. And you can only win using one weapon: childlike wonder.

Created by Paloma Dawkins and Kyler Kelly (with music by Ylang Ylang), Gardenarium was created with the support of the experimental game collective KO-OP Mode. Be sure to check out their other games and keep an eye out for further collaborations.

You can download Gardenarium for $4.99 on PC, Mac, and Linux.