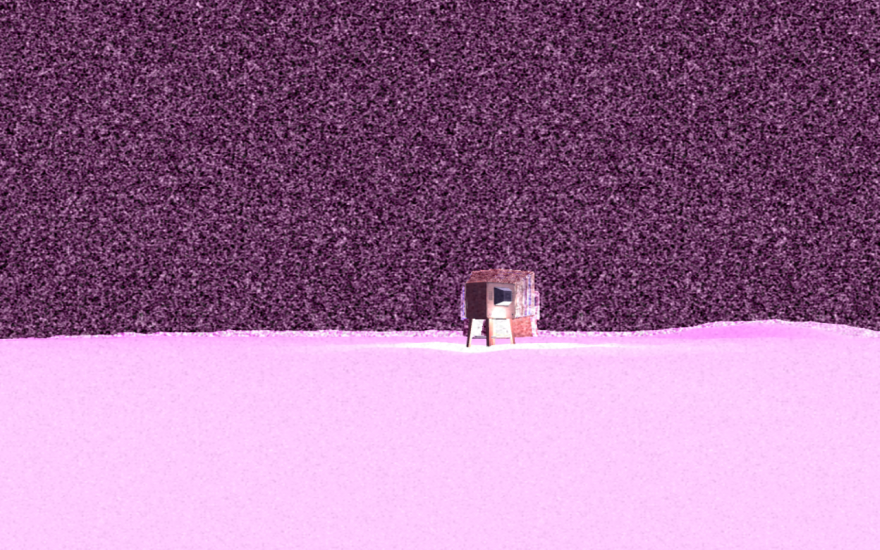 “. . . but the Universe is an awfully big place. There is room enough for an awful lot of people to be right about things and still not agree.”

? Kurt Vonnegut, The Sirens of Titan

Garmoniums is certainly one of the most curious games I’ve ever encountered—both in terms of its content and context. Moscow-based designer Fedor Balashov created Garmoniums for the Glitch Jam last summer, listing a fascinating combination of reference material spanning from Vonnegut, to non-verbal virtual communication, to Kant’s theory of synthetic perception.

Though a little might be lost in translation (still 100% better than my Russian, mind you), Fedor describes the game as an experiment based on the tension between the inward, subjective experiences and the external world. You begin the transcendental journey in an uncharacteristically quiet place, walking around a desolate planet with nothing but a spacecraft and TV set as company.

But, after walking toward the TV, an electrical droning rings in your ears and you leave behind the simple world and enter an area that literally requires a seizure warning. The glitchy, ephemeral landscape coincides with the dynamic soundscape, which shifts depending on where you walk. From the beginning it is clear that this world will only carry the meaning you ascribe to it, yet that won’t stop your mind from racing with high-flown ideas.

A few key objects are scattered across the expansive yet claustrophobic space. Each has its own atmosphere of sorts, with a unique set of visual-spatial and audio-spatial impressions that disappear once you walk away. Fedor explains that he’s interested in exploring our intuitive understanding of tones and visuals—like how the major versus minor scales are always interpreted as happy versus haunting melodies.

The objects give off unique sensorial experiences that totally change your relationship to the space. Over by the TV, the world descends into a fun-house mirror of glitching backgrounds, and droning wavelengths. But a spikey, technicolor ball I found floating in the sky emits a delicate tinkering noise. It’s a busy, exhausting, overwhelming world that almost assaults your senses. You’ll find yourself gravitating toward objects that comfort you for some nostalgic reason or another, like the spikey ball that reminded me of Mario Galaxy.

On a stylistic level, the Vonnegut influences ring true in terms of Garmoniums’ moment to moment intensity, inspiring a perpetual flow of high-concept musings. Like Kant’s theories of experience, Garmoniums plays with our personal perceptions of external objects while also tapping into more universal human understandings. Fedor explains in the description that the game is designed to invite subjective free-associations while anchoring them in fixed, collective understandings. The symbolic objects (like a piano, dog, astronaut, building, tree, triangle) act as focal points in a jumbled mess of audio-visual queues.

I checked out an old playthrough of the game, to compare with it to my own experience, and saw theory proved through practice. RockLeeSmile over on Indie Impressions hated the tinkering of my favorite Mario Galaxy friend, and spent most of his time naming random things the object-sets reminded him of. It made me start seeing Garmoniums as something of a Rorschach test, showing us what we perceive and how we think through the vagueness of shapes.

After surviving the disorienting jumbles of objects in what feels like hundreds of tangential worlds, you somehow manage to return to that original desolate planet. Your spaceship is in the distance, a symbol of home among the chaotic flashing lights and impossible spaces. You run towards it with all your might—only to be dropped back at the starting screen.

Though there hasn’t been much word on the progress of Garmoniums since the summer, Fedor does describe it as an incomplete alpha version. Keep an eye on the game’s website for future versions, and play the current one here.