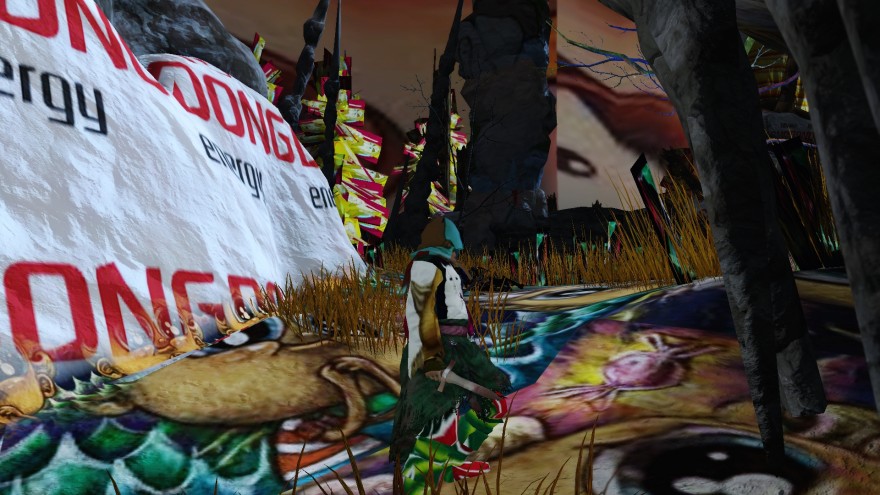 Krisis18z’s work has been described as “cancer” and “disgusting” by onlookers. But it was Kotaku that went the furthest by saying that “without hyperbole, this is the worst thing ever made. By anyone. I don’t know if my eyeballs will ever recover from this atrocity.” Pretty harsh. And yet, Krisis18z seems to be relishing this torrent of hateful criticism. This is sorta what he expected.

The subject here is his Dark Souls II mod entitled “Philosopher of the First Meme.” It’s a complete retexturing of the game that sees its sauntering medieval fantasy replaced with the guts of the internet’s richest trash. Rock faces, shields, castles, armor, practically everything in the game’s world has a grotesque image of a meme lacquered onto it. Any sense of composition is thrown aside in favor of presenting a clashing mess of bright colors and pop culture’s most queasy-looking faces.

maximalism at its kitschiest

Buzz Lightyear grins from a hardened warrior’s flowing cloak. A shoddily-drawn portrait of Link from The Legend of Zelda is the face of the gems used to restore health. A tortuous medley of Pokémon theme music and Korean pop hit “Gangnam Style” is strung together like snot to form the soundtrack. Krisis18z wasn’t just going for discordance with this mod. This is maximalism at its kitschiest.

It’s easy to say that “Philosopher of the First Meme” is an effort to troll the Dark Souls II community and anyone else who comes across it. Have a look at Krisis18z’s Twitch profile and you’ll see he describes himself as “a trashcan souls player and love[s] annoying the hell out of people.” He claims that this sentence is a joke between himself and the people he knows in the Dark Souls II community. As veterans of the game, he and others enjoy annoying less experienced players by purposely using frustrating tactics in the game’s PvP.

“We tend to use slower and weaker weapons against less experienced players which is entertaining for us (It’s basically like challenging yourself by using a non-optimal setup) but it ends up being a nuisance to the players you fight against,” Krisis18z tells me. This might sound cruel but Dark Souls II is a game that implicitly encourages this type of behavior among its community. For these avid and long-time players, who have ran through the game and its DLC several times already, finding new challenges and amusing each other by pranking other players is a way to keep Dark Souls II feeling fresh. The “Philosopher of the First Meme” mod is another.

“It was a beautiful laughter-inducing sight”

It all started with Krisis18z wanting to find out if Dark Souls II‘s maps and weapons could be edited somehow. This would mean that new areas and weapons could be added to the game—it was curiosity driven by wanting to get more out of a beloved RPG. Unfortunately, none of what Krisis18z was hoping for is possible. But he did find out he could mess around with the textures. “That’s how I came up with the (idiotic) idea to inject a massive amount of textures to see if the engine could cope with it,” Krisis18z tells me.

He started out by pulling images from his hard drive. There, he had built up a collection of anything on the internet he had found funny, and so these were the first injected into the game. The result after the first batch had Dark Souls II looking like this (yes, that is George W. Bush):

Krisis18z was struck by how unfamiliar Dark Souls II looked with these new textures. In a way, he had achieved his original goal of making new areas from the game by repapering the existing ones so drastically. But then he was overcome by laughter. “It was a beautiful laughter-inducing sight,” he said. “The expression ‘It’s so bad it’s good’ would describe the feeling perfectly.” Once the first area was completed he found himself compelled to continue with the next three. He pushed the limits of the engine so that in some places the game’s frame rate stutters and play becomes a series of twitchy half-movements.

None of this work was particularly easy. The process involved having to edit every single texture by hand, separating lightmaps and particle effects from the texture and mipmaps, and the only way to find out which texture was what was to load up the game and find it. After hours of painstaking work and with his inglorious creation immediately impressive in the worst and best possible way, Krisis18z had to share it with friends.

The person who first streamed “Philosopher of the First Meme,” helping to spread knowledge of its existence, was RandomGypsy. Viewers reacted well to it, most of them simultaneously horrified and awed by what they were witnessing. It gratified Krisis18z right there and then. “People got a laugh out of it and found it genuinely entertaining, that’s all I wanted it to be and could ever wish for.” It wasn’t until spreading the mod out further to the Dark Souls II community that the giggles came mixed with a larger brunt of negativity.

But even the hatred isn’t fully sincere. Even if you like the mod or only find it mildly amusing, you cannot reveal this. We are trained on the internet by each other to embrace memes to express ourselves but to also acknowledge that they’re the worst thing ever. This is because memes exist to fight for attention in the most gaudy way possible. The are desperate cries that use the most crass tactics to be noticed. Nothing is off limits in memes so long as it can connect a single idea that can be shared between millions of people from around the world within seconds. In this way, they are glorious in their communicative power. But memes, like the ideas they’re attached to, quickly die and are thrown away hastily into the waste dump of the internet’s past (until it becomes old enough for nostalgia to kick in).

Krisis18z’s mod is interesting for a number of valid reasons: it’s a reflection of how overwhelmed our lives are with information, it inverts the efforts of a huge production and challenges notions of value, and its artistic grossness actually makes the game worth revisiting even for those intensely familiar with it. But due to being plastered in memes, if you’re introducing it to a friend, you’re going to say that it’s the worst mod ever made and that it resembles an especially disgusting type of vomit. That’s the unwritten rule.