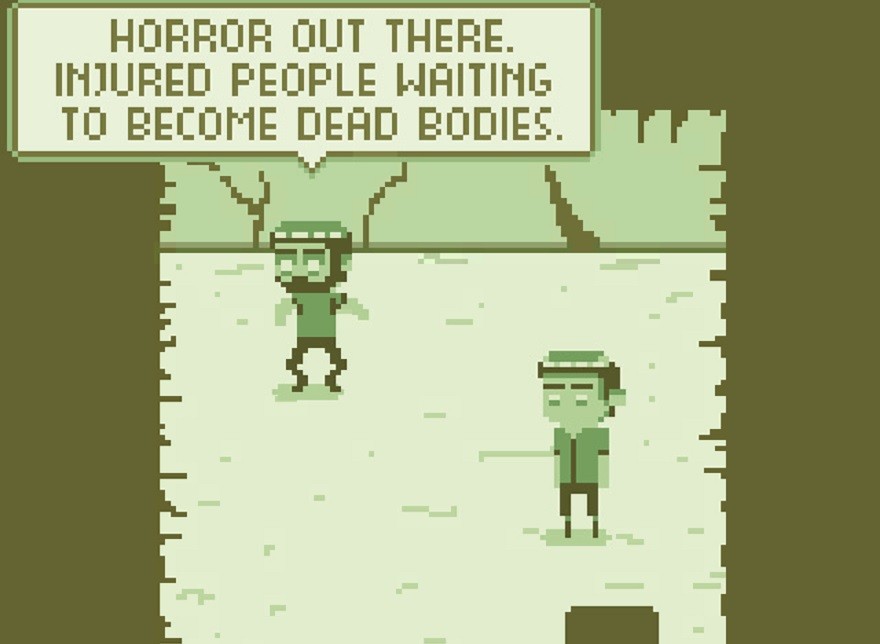 They’re shaking the screen from the second I start the game up. The lo-fi boom of a shell follows me to the title menu. Even the About screen beats with the regular thud of a city-crushing barrage weighing in at a total of 400 tons. That’s the impression you’re supposed to get, and it isn’t half-bad: it’s certainly troubling that you can’t escape the shakes and the sounds.

“The game is based on real tweets from ,” a sobering message tells you before it all begins. This small Game Boy Jam game is titled GAZA, a bold title in authoritative capital letters, as if it were as accurate and encompassing of its subject so as to be its definition. Credit where credit’s due: despite the pixel art and shades of Game Boy green, it feels oddly but impressively intimidating in those beginning screens.

The tragedy isn’t in the death of a person but in not beating your previous score.

It promises to be a game about the conflict that isn’t out simply to offend, or to document the arbitrary perspective of a distant outsider; it’s going in right at the heart with the people it affects the most.

Unfortunately, and in retrospect somewhat predictably, it doesn’t quite achieve what I was hoping. Playing is a different experience from what it may initially impress upon you. You control a family trying to survive hunger, the cold, bullets, and missiles inside the strip while attempts to flatten it. Within seconds or, if you’re lucky, minutes the father, mother, son, and dog will be smouldering piles of ash, or laying bloody and punctured on the floor. The violence is quick and unforgiving, perhaps even shocking—that much cannot be denied. But, while it sounds horrifying, and it should be horrifying, somehow, it’s not.

The last thing I was expecting and wanted from was for the music to be so excited about the whole ordeal. It sends you into a frenzy of switching between characters to find shelter, food, and to avoid the armed soldiers. There’s no time to establish a connection with anyone or the real tweets that have been turned into speech bubbles; no time to build any empathy. Instead, the focus is on an arcade scoring system that increases the longer that you survive. The tragedy isn’t in the death of a person but in not beating your previous score.

ends up feeling like a shallow videogame. That’s all it is and ever was—it was made in a number of days, after all. It’s no different to thousands of other videogames out there. But this one is turning real people’s lives into a place on a scoreboard; people who are dying right now, right as you play. Yet death is devoid of weight in GAZA; we don’t get to know any of these people, and all is resolved with a simple click of the “Retry” button.

It makes me question its purpose: what is ‘s role in contributing to the mediated history of the conflict? “Discover the stories of Gaza Strip survivors,” the game’s creators claim. It’s too shallow to achieve that, there’s too much action and brevity. An action arcade game certainly doesn’t seem like the right framework to approach this subject matter with the intention that its creators had. This could be any setting, any conflict, and any one—the specific context and the tweets don’t do enough here.

Perhaps it’s foolish to expect for any videogame to say anything meaningful about the conflict. It’s not that videogames need to say anything about it either, but that games on the subject do already exist, so if they’re going to engage in current affairs like this I’d rather them teach something more helpful than how to get a high score in a war zone. There are games that do seem to have a better approach, such as the upcoming This War of Mine and The Sun Also Rises. Perhaps they’ll prove that videogames can provide us with more than disaster tourism and encourage others to follow suit.

You can play GAZA for free in your browser on Game Jolt.