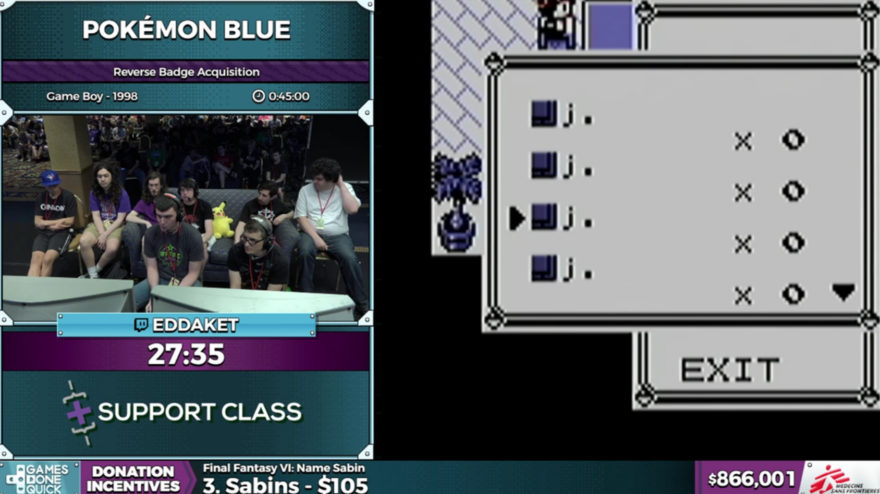 The appeal of live broadcasted speedrunning events isn’t always clear. But, first and foremost, these bi-annual speedrun events are showcases of knowledge, skill, and rote memorization. At this year’s week-long Summer Games Done Quick event, which just wrapped up this weekend, there were the obvious, often outrageous displays of frame-perfect gameplay. One runner, Romscout, ran through Castlevania: Symphony of the Night in an hour and eight minutes—blindfolded. Sivade35, another absolute virtuoso of play, ran through the entirety of Dustforce (collectibles and all) in an hour and three minutes, breezing past a collection of near-impossible “Difficult” levels that I didn’t even know existed.

The other driving force behind Games Done Quick is the sense of community that permeates the enterprise of speedrunning. While many online forums pride themselves on hype for unreleased games or the ability to churn out fresh memes on a weekly basis, speedrunning is, by its very nature, a hobby that demands collaboration and the open sharing of ideas and information. Throughout each run, the players narrated their whole process, explaining methods for bending and sometimes circumventing a game’s intended mechanics. Many of these players were accompanied by other speedrunners who probably share space on the same leaderboards. They’d talk about each other in relation to other high-level speedrunners they know, sharing the history of moves and level routes, attributing them to their respective pioneers.

it demands collaboration and the open sharing of ideas and information

That’s kind of the inspiring thing about speedrunning: it’s a bunch of people who want to get really good at a specific thing, and lean on one another to spread the information they need to get it done. Many of the runners had their own stories about how they got into speedrunning, and many of them expressed surprise at how easy it was to get started. Whether or not that’s true is tough to know, but it’s easy to tell that there’s a latent desire to spread the speedrunning love. It seems appropriate for a community this collaborative, then, that the crux of their bi-annual event would itself be altruistic. This year’s Summer Games Done Quick event raised $1,298,479.44 for Doctors Without Borders—driving even the rowdy Twitch audience to donate to the cause.

In 2013, I saw Narcissa Wright beat The Legend of Zelda: Ocarina of Time at Awesome Games Done Quick. It took her 22 minutes and 38 seconds. By exploiting bugs and glitches inherent in the original game, she jumped through walls and warped through space and brandished twigs like they were katanas, making the game think she was doing things that weren’t actually happening. My personal fascination with speedrunning dates back to Narcissa’s Ocarina of Time run and has to do with the way speedrunners poke holes in systems that were once imagined to be impenetrable.

Having already beaten Pokémon Blue Version multiple times myself, I figured that the only bugs to be found in that game were the ones involving MISSINGNO—an infamous glitch that allowed players to duplicate items to advantageous effect. As a kid, I’d heard that secret from a neighborhood friend, who himself had heard from a friend, whose uncle probably worked at Nintendo if the rumors were to be believed. At SGDQ 2016, a player called Eddaket beat Pokémon Blue Version in 33 minutes, dispatching each boss in reverse order. As most people who have played Pokémon probably know, this should be impossible. But Eddaket and some other mad scientists in the Pokémon speedrunning community have found ways to exploit bugs in the game, and, apparently, this feat now belongs to the realm of the possible.

this should be impossible

At one point in the run, Eddaket saves his game and resets his device, then talks to an NPC and somehow has gained the ability to walk through walls. Next, he starts screwing around in the pause menus and can all of a sudden duplicate his items. For the grand finale, Eddaket pokes through a dot matrix soup of glitched-out menu options and somehow emerges with the power to warp to different sections of the game. At this point, everything begins to look like a pixelated mush, but Eddaket calmly summons up each boss one at a time, which effectively gives him the ability to beat the game in reverse order.

These broken speedruns poke at some primal imagination cortex at the center of my brain. To me—a person who’s spent tens of hours playing Pokémon—there is effectively no difference between watching a player carry out some obscure ritual to break the rules of a game world, and watching the same thing happen in real life. And even though I know this is the product of many years’ worth of osmosing ideas and techniques, it’s always a surprise to see speedrunners find new ways of reaching beyond an established world’s ruleset and tapping into some sublime parallel dimension where the impossible no longer exists.