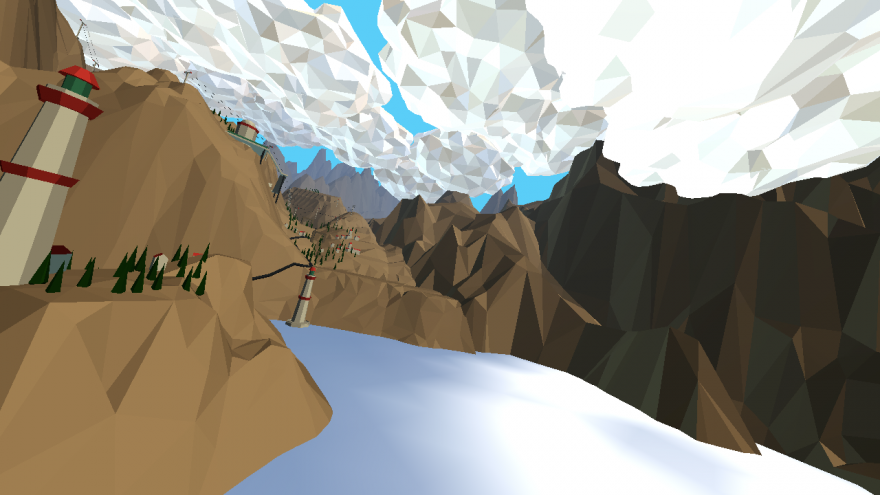 Samsung announced its Gear VR this week, which is a virtual reality headset compatible only with the company’s new Galaxy Note 4 smartphone, co-developed with Oculus Rift. That explains why you’ve seen an increase in photos of gormless people staring at a box attached to their face over the past couple days. You click the Galaxy Note 4 into the headset, slap the strap of the over-sized goggles to the back of your head, and then use head movements and a trackpad on the headset to control games and apps inside.

The Gear VR isn’t anything new, outside of it being specifically developed for mobile games, as opposed to the Oculus Rift’s focus on PC titles. For me, the most intriguing part of Samsung’s announcement this week isn’t the technology itself but the number of studios that are creating virtual reality mobile games for it, and the types of games it’s encouraging, too.

It has almost felt like a mini-console announcement due to the number of “exclusive” titles to emerge out of the woodwork at once. They’re not your typical VR games, either—they’re experimental, artsy, and colorful.

The first one to mention is ustwo’s Land’s End (which we already mentioned briefly). The team behind are bringing us more mystery and beauty in purple and pink hues. Little is known other than it’s to be a “surreal trip through an archipelago of forgotten worlds.” That, along with the game’s single image, is enough to give my imagination a work out.

Italian studio Mixed Bag games also revealed that it’s working on prototypes for an eventual Gear VR game. “We are so excited about it: you have to start from scratch and ‘forget’ a lot of conventions in game design and development. It’s not something that happens often,” Mixed Bag co-founder Mauro Fanelli told me.

Mixed Bag has been doing a lot of experimenting, finding out what does and doesn’t work in virtual reality, hence its constant scrapping of ideas and starting afresh. It’s why the only thing the studio has to show is “Prototype”: an experience through a surreal world. That’s all Fanelli could say about at it at this point; mind you, the screenshots he shared say much more.

Not only is Gunner a colorful space shooter, the likes of which hasn’t been seen since the early ’90s, it also showcases the advances in accessibility that virtual reality games bring. Flying around space, blasting off those huge rainbow cannons, is managed entirely by head movement; it’s a no-hands experience.

At the opposite end of the spectrum is Perfect Beach, which is being created by nDreams, the studio also behind Gunner. is intended as a tranquil, meditative experience. Inside, you lay down on idyllic virtual beaches, taking in the sights and sounds of the seaside, and hopefully forgetting about the Gear VR on your head. As an additional plus, you can import your own music into , rounding off the virtual vacation.

Imagine Mario Kart in planes and the tracks are candy cane-colored tubes that you can spin around. That’s Tail Drift in a nutshell. It’s one of the first arcade racers for virtual reality. It works by translating head movements to the side into tipping the plane left and right. The Kinect version uses pelvic thrust to fire its weapons, but the Oculus Rift and Gear VR will rely on button presses instead.

Fireproof Games is known for its intricate puzzle adventure series The Room, but it’s also producing a Gear VR-exclusive jetpack game. It’s set on a remote island training facility for Cold War super spies. You’re one of them, with a nuclear-powered jetpack strapped to your back you blast around a city on daring missions in order to graduate as an elite spy.

Admittedly the least fancy of all the Gear VR-exclusive games is Temple Run VR. The enormously popular endless runner for mobile has been re-purposed for a first-person view. You’ve stolen an artifact from a temple and now have to escape the Arctic Demon Monkeys that hunt you down. With head movements you dodge left and right, and somehow jump, across icy cliffsides and slippy footbridges.

Outside of these newly announced games, it was revealed that Harmonix has partnered with Samsung to produce Gear VR games, and that the cyberpunk hacking game inspired by ’80s movies, Darknet, is coming to Samsung’s new headset, too.

Up until this point, I haven’t seen many virtual reality games that have sold me on the idea of appearing on whiteguyswearinoculusrifts.tumblr.com, outside of a few bizarre outliers such as the Classroom Aquatic. Now, well, let’s just say I’m not opposed to this kind of appeasement. Keep it coming.