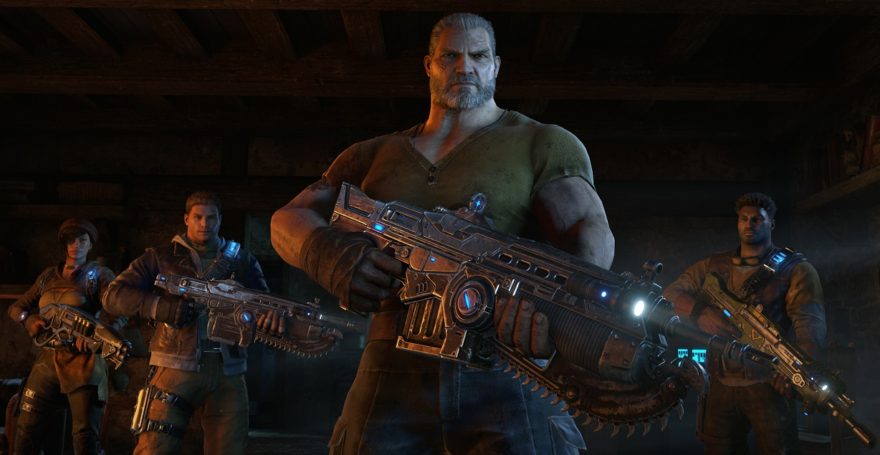 A number of things define Gears of War. There’s the chainsaw-equipped assault rifle used to saw murderous reptile men in half, the constant rhythmic challenge of timing a supercharged gun reload, and, of course, the brick shithouse soldiers that players control throughout. These are all constants in Gears, reliable design elements that tie the series—a trilogy and spin-off game—together, regardless of where the story itself goes.

Gears of War 4 is an intentional break from everything that came before, but, since it has that 4 on the end of its name, it’s also, in many ways, a continuation of Gears tradition, too. Much of it feels immediately familiar—there are still chainsaws and monsters and “active reloads”—but the way the characters move is different enough to give the series a shot in the arm.

New protagonist J.D. Fenix is the son of a meat skyscraper and, though he’s still a square-jawed, crate-shouldered fellow, he isn’t quite the same walking pile of rocks as his dad, Marcus. J.D. and his combat buddies are noticeably smaller. They don’t thud in straight, rigid lines as they move about the battlefield. Instead of a rampaging herd of baby elephants, they’re more like overweight tigers. (And, no, that’s not Vietnam War commentary.)

Their feet shuffle across the ground like an average person’s feet do while running. They take steps without the earth shaking in response. Gears of War 4 is very much in line with its predecessors, but it’s also something new. Run down a feature list of game modes and watch a few minutes of the player slipping in and out of cover, spraying bullets at waves of enemies, and nothing about it seems like a radical departure. Spend a few minutes controlling the characters, though, and it’s clear that something’s just different enough to notice.

Gears of War 4’s slightly changed character movement is by no means a revolutionary change to the series, but it does offer a little glimpse into the ways in which developer The Coalition is attempting to make Epic Games’ creation its own. J.D. isn’t his dad and Gears of War 4 isn’t a carbon-copy of Fenix Senior’s past adventures, even if the family lineage is clear.

To be absolutely clear: the latest Gears is still Gears, right down to its enormous, muscle-bound bones. It is still conservatively, nearly religiously devoted to the Shooter Gospel According to Cliffy B. But, it’s also, thankfully, willing to alter as it adapts—to loosen the constraints that kept both the tone of the past Gears games and their linebacker heroes barreling down a pre-determined path.