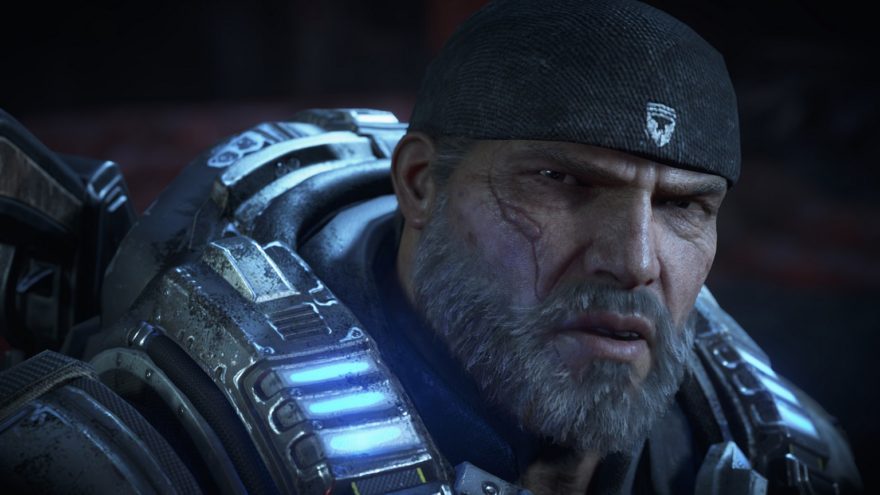 Two moments stick out from Gears of War 4.

In one, a geyser of blood shoots from the exoskeleton of an enormous, crablike Corpser as the Hammer of Dawn—a satellite-guided laser—rains a beam of molten death down upon it. Fountains of gore flow from the creature like a waterfall while serious, beefy dudes in massive armor run accompanying waves of monsters through with a typhoon of bullets.

In another, later scene, sparks fly off a metal-plated security robot as new protagonist JD Fenix plinks it apart with a submachine gun. He makes lighthearted, Whedon-esque quips to his pals and wears distinctly normal person clothes—khaki work pants and a rolled-sleeve sweatshirt—under his protective chest plate.

The first scene is from Gears of War 4’s prologue, which consists of a few short levels recapping important events from the original Gears trilogy. The second recurs throughout the early part of the game, as JD is pursued by an automated military deployed by the same Coalition of Ordered Governments (COG) that his dad, Marcus Fenix, fought at the vanguard of in past games. This juxtaposition is meant to show how different Gears of War 4 is from what’s come before—how JD isn’t, like his father, the personification of a militarized society that values nothing as much as overwhelming martial force.

“Thankfully, COG armor’s a little lighter these days,” JD Fenix says while exploring a decrepit museum. The exhibit, which was a raging battlefield only a few moments earlier, depicts both his world’s recent military history and the events of the original Gears of War trilogy. Little dioramas show skirmishes between overgrown soldiers, weapons are propped up in display cases, and, in one, a set of bulky armor of the sort worn by past Gears characters is displayed.

Gears of War is a little lighter these days, in a lot of ways. In a literal sense, JD and his two companions—fellow military deserter Del and rebel fighter Kait—wear less equipment and move around the battlefield a bit quicker than their enormous predecessors. But, the game is lighter in a larger sense, too. As non-regular military, JD and Co. aren’t an organized military bludgeon like Marcus and his COG squadmates. They are, instead, a nimble guerilla-style group of fighters without the might of a militarist government supporting their every move.

no substitute for good, old-fashioned blood and guts

This change in focus initially holds a lot of promise, especially in its positioning of the COG—the series’ former heroes—as the new enemy. JD and Del have abandoned their authoritarian government and come to live with Kait and other “Outsider” dropouts in an idyllic commune, finally fulfilling the anti-war sentiment that the prior games hinted at (there’s a reason those tough guys cried, grumbled, and raged between firefights) but never fully developed. The COG, now represented by mindless robots, propaganda posters, and the aging husks of the same bloodthirsty Gears soldiers who defeated the Locust monsters of the original trilogy, has become the totalitarian state that it always promised to be. Fighting against it, shooting down their armies of steel machines and raiding COG outposts to support the Outsider commune with pilfered government tech, is the logical next step for the series.

Before too long, though, in an implicit understanding that the electric sparks and splashes of oil that fly from chainsawed enemy bodies are no substitute for good, old-fashioned blood and guts, Gears of War 4 shies away from its promise, abandoning its earlier feint at subversion to opt instead for a more familiar kind of story.

JD Fenix makes quips. He never growls. As JD chainsaws through one of the game’s recurring, mucous-gated barriers, he affably sputters, “Aw, I hate this. Aw, aw, aw!” When he scoops up ammo from the ground, he happily calls out, “Don’t mind if I do!” or grunts “Sweet.” JD is a hero in the Harrison Ford mold—a winking rapscallion who’s tough enough to weather inhuman conditions, but still sufficiently down to earth to complain about his discomfort as he does so.

JD is the fucking worst.

He’s tolerable in Gears of War 4’s early acts, when the lightness of his banter is matched by the inconsequential violence of shooting robots and Robin Hood-ing gear from a government outpost. Before long, though, the plot attempts a darker bent, introducing monsters called the Swarm, reuniting JD with his estranged dad Marcus, and leading the group on a life-or-death rescue mission to rescue Kait’s mom.

At first, the shift from easygoing romp to horror-lite monster fighting seems appropriate. The autumnal feel of the entire game—and the eerie, haunted house vibe of the dead leaves, grand stone forts, and enormous white moon that fill the single night over which a large portion of the events take place—lends a nice Halloween feel to the introduction of some gnarly creatures. The Swarm are noxious—similar in shape, but texturally nastier than the old trilogy’s Locust monsters. There are a handful of amphibian varieties, but the most common enemies are Locust-style creatures, whose rocky scales have been replaced by painfully glistening reddish-white skin that makes them look like animated infectious wounds. As the characters track down the source of the threat, they end up exploring hellish spaces where crumbling Old World stonework and sprawling industrialized mineshafts are lined with ulcerous incubating pods (which burst with fluid and, occasionally, a tiny feral monster when punctured), pulsing intestinal vines, and the slumped skeletons of fallen soldiers.

In these sequences, the player’s weaponry finally finds appropriate targets. As the robots are replaced by the Swarm, the series’s trademark chainsaw bayonet gets to cut into monsters whose festering bodies are gross enough to be worth the effort; the shotgun, booming like a cannon, starts finding wonderfully disgusting feedback as flesh and blood enemies explode with a sound like a bag of chicken livers hitting the windshield of a speeding car. It becomes obvious here that Gears is best when it’s brutal—a teenager’s notebook depiction of heavy metal post-apocalypse.

Gears 4 takes only half measures

But the outsized nastiness of Gears’s combat has always been matched by equally ridiculous characters. JD, Kait, and Del, while decently suited as the PG-13 revolutionaries the opening demands, are too earnest, jovial, and just plain soft to hang with the snarling monsters and viscera-soaked battlefields of the rest of the game. (Kait, who sells a world-weary viciousness better than either of the boys, comes closest to making the new approach work.) Gears is a world so over the top that it requires superhuman characters to offer the player a proper entry point.

This is never more apparent than in the game’s most memorable scenes, which feature the return of characters like Marcus Fenix, now older, more restrained, but only slightly less of the human-shaped Y chromosome he was in the past. He’s of the old school, which Gears 4 largely seems ashamed to perpetuate outside of guest appearances and the excellent online modes—a decent enough competitive option called Versus and Horde, where players fortify an area and defend it against increasingly overwhelming waves of enemy siege attempts. Free from the narrative, old characters return to fight forever, saying nothing but beautifully stupid one-liners as they shoot and cut and punch in an eternal Valhalla.

Otherwise, Marcus is intentionally presented as a dinosaur, his hyper-masculine posing depicted as being as outmoded as his faded, off-brand Diesel do-rag. If there was a real rejection of what Marcus and the original Gears soldiers stood for in this latest entry—if the subversion hinted at in the game’s opening found real articulation—it would be easier to accept the story’s tonal fumbling. But, Gears 4 takes only half measures. It discards a lighthearted adventure premise for another fate-of-humanity monster invasion. It gives up on the anti-militarist bent of its early fight against the COG for another plot about soldiers trying to save humanity.

Most discordant, though, is the attempt to humanize JD, its principle tough guy, by replacing a caricature of manliness with a subtler and less immediately ridiculous one. While less overtly masculine than his father, JD still stars in a game where the only same-age woman in his proximity is fated to be his girlfriend. He still saves the day by being the craftiest, hardest guy around. He may reject the violence of the COG and his father outwardly, but, aside from taking himself less seriously, he’s really not very different from them at all. He may attempt to come across as someone other than the kind of man who’s born into such a violent, militant world, but doing so just leaves him confused and far less effective than he could be. Like Gears of War 4 itself, he’d be stronger if he fully accepted what he is.