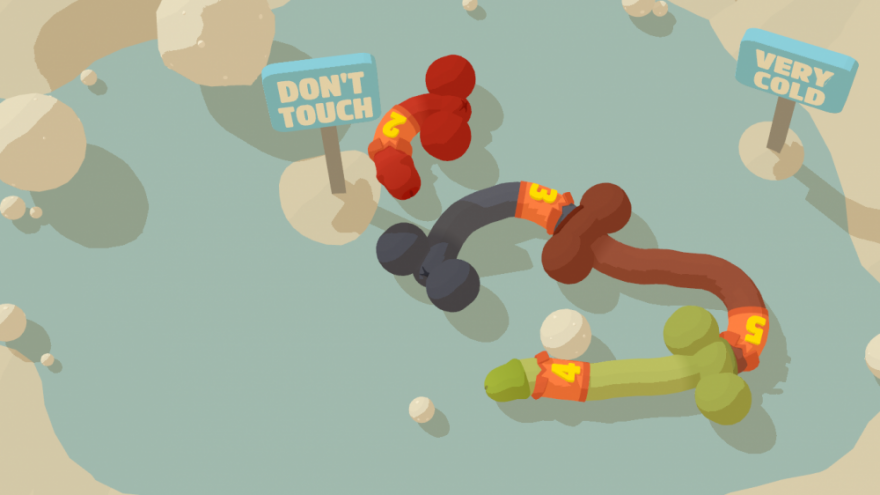 It’s time to make some dicks look silly. Yep, Genital Jousting has arrived on Steam Early Access today. It’s an online and local multiplayer game about penetrating your friends, and yes, it’s as crude as that sounds.

Everybody plays as a creature made of male genitalia in this game: a flaccid penis, a pair of inflated testicles, and an anus. You score a point in each round for either being penetrated—another player inserting their penis into your anus—or penetrating someone else. If you manage both in a single round then you get two points. It’s a game about achieving orgiastic connections. “If this is something that makes you uncomfortable or sounds unappealing, please do not purchase or play Genital Jousting,” warns Free Lives, the South African team behind the game.

The current version of the game has three different game modes. If you have no one else around to play with then you can jump into the online lobby and find games with strangers. Otherwise, there’s the Traditional mode, which puts up to eight players (with a minimum of three) on the same machine in a bare arena where they do battle by way of sloppy intercourse. Fluids fly, anuses squelch, and everyone hopefully has a good time—note that to join the game everyone has to “Hold up to consent.”

Of course, this being Early Access, there’s potential here for more games too, some that may further push our boundaries of what we think acceptable. But, for now, the team is focusing on “listening to whatever reviews there are and trying to fix whatever problems we’ve created,” according to Evan Greenwood, one of the creators at Free Lives.

videogames aren’t ready for vaginas yet

It’s also interesting to note that Genital Jousting‘s arrival on Steam Early Access comes only a couple of days after a controversy involving a vagina in a videogame. Specifically, it was the recently released Watch Dogs 2, which has some character models expose their fully-modeled vaginas. One PlayStation 4 player took a picture of one of these vaginas and shared it. Doing this earned him a temporary ban from Sony while the team at Ubisoft that made the game removed that virtual woman’s genitalia from it.


Of note here is that Ubisoft has removed the explicit depiction of a vagina from the game while there are male characters who walk about with their dicks out that remain untouched in the game. When we spoke to Greenwood earlier this year about Genital Jousting and its portrayal of male genitalia he said something that is relevant now more than ever. “Making penises abject and silly works well because masculinity is so often portrayed as powerful and successful,” he said. “That same joke doesn’t translate perfectly to vaginas.”

The Watch Dogs 2 controversy seems to prove Greenwood’s instincts are right—videogames aren’t ready for vaginas yet. But dicks? As long as they’re flaccid it seems they can be fully exposed without too much panic. Hell, in Genital Jousting you can dress them up in bow ties and create an ouroboros entirely out of dicks and anuses.

You can purchase Genital Jousting on Steam Early Access. Find out more about it on its website.