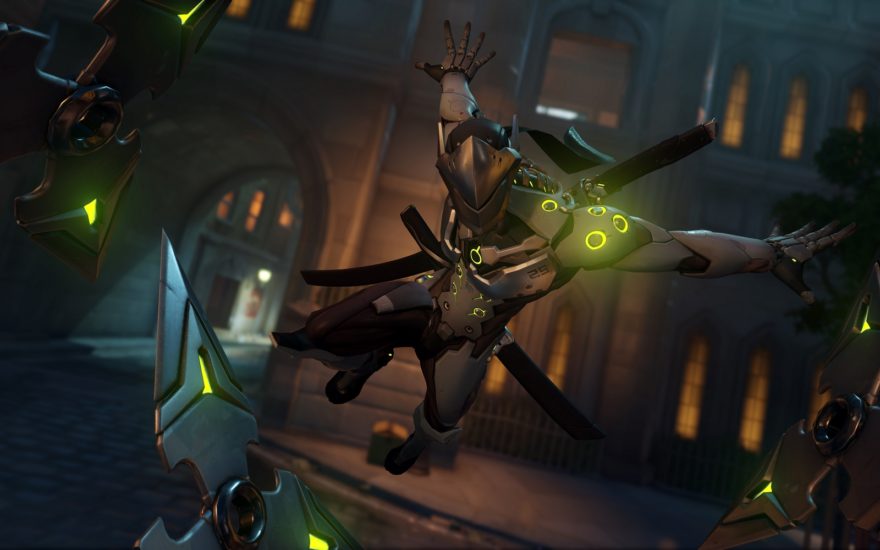 “You may call yourself my brother,” says Hanzo, Overwatch’s longbow-using sniper to his cyborg sibling, Genji. “But you are not the Genji I knew.” He shakes his head with disappointment, struggling with ideals that are as old and out-of-place in this future world of intelligent gorillas and sentient robots as his choice of weapon. Genji sheathes his blade, and thinks of his friends back in Overwatch. “I have accepted what I am.”

It’s summer vacation and I’m sitting at dinner with my family, seeing them for the first time since I started transition five years ago. “What do we call you now?” they ask. “Michelle,” I reply. They hem and haw. Some respect my wishes. Most refuse. A few compromise and start calling me “M.” A year or two ago, I would have been devastated, but now I am fine. I no longer need their approval. I have a new family now, filled with people whom I have chosen, and who do not need to love me “‘in spite of” anything. I have accepted who I am.

Genji is on the battlefield. He dashes around his team with superhuman grace. He has brought a knife to a gunfight, but it does not matter. If everyone else is firing bullets, he is the bullet. A quick dash to a Widowmaker that is keeping his team pinned down. Two shuriken fans and a slash later, she is down. A Bastion is about to break through his team’s cover. Another dash and a reflect saves his Reinhardt. “Mada mada.” The enemy team has wised up. A Winston is chasing Genji down. But a quick double jump and a wall climb later, he is safe. For the second time in his life, his cybernetics have saved him.

he is a borderline superhero

It is my sophomore year in college. I have been on hormones for just a few months at this point. I am browsing LikeaLittle, a social network that existed for a small window from 2010 to 2012, and that allowed students on various college campuses to leave anonymous notes confessing crushes and asking each other out. I mostly browse out of boredom and curiosity—I’ve never been popular on these types of things, and I don’t expect to see myself here. Today is different, though. I find a note made out to the blonde girl on the second floor of a certain dorm: I am the only one who matches that description.

I make a post on Facebook asking if anyone knows who might have left the note. Later, I get a message from a girl I had been talking with on and off since coming to school, and who has mostly been shy around me up until that point. She tells me that she’s been wanting to ask me out for a while now, but wasn’t sure how. When she saw me begin my transition, she was impressed by my willingness to just go for what I wanted, and decided to do the same. We date for a year, and remain best friends after breaking up. I still call her from time to time, especially when things are hard, and when I’m not sure I want to go on. On more than one occasion, her words have saved my life.

“Ryūjin no ken wo kurae!” Genji draws his blade. A Reaper is heading for his team’s supports. Dr. Angela Ziegler, the woman who saved his life, is about to die. Zenyatta, the Omnic monk who taught him to accept himself, is about to die. He uses his new enhancements and dashes to the Reaper. Down. He moves on to the attack. From enemy to enemy, he cuts through their defenses and clears them away from his friends. The enemy Hanzo tries to stop him: “Ryuu ga waga teki wo kurau!” Deflect. Whatever Hanzo may say, Genji is still a Shimada, and the dragons agree. Victory! His family is safe.

It’s the Transgender Day of Remembrance. I am sitting in the campus chapel lighting candles for a vigil I’ve organized. We read the names of those we’ve lost that year. Later, we hold a panel, where students can ask questions from members of the trans community on campus. Afterwards, I have someone come up to me and tell me they think they might be trans. I tell them about my experience, what has helped me find happiness, and point them to resources that might help them do the same. They thank me, and we become fast friends. Throughout the next few years, I get used to giving this talk. I become a resource for the questioning. Eventually, I move to New York and start writing for one of the leading LGBT magazines in the country. I write articles about how to deal with police discrimination. I profile underfunded healthcare clinics specifically dedicated to caring for New York’s uninsured queer population. I keep my family safe.

“What have you become?” Hanzo dejectedly asks his brother towards the end of the Overwatch short “Dragons.” Genji doesn’t say it, but in my mind, I think: strong. Before joining Overwatch, Genji was a playboy who spent most of his days lounging around, wasting his talent, unhappy with the crime family he was born into and what they expected from him, but not sure what to do about it. Now, he is a borderline superhero, using his considerable skills that would have otherwise been wasted to save those he cares about, and helping serve as an ambassador for the Omnics that taught him self-love during a time when he didn’t know how to handle who he was.

I, admittedly, am nowhere near close to being a badass cyborg ninja. Still, in transitioning rather than hiding from myself, I now have more friends than ever before, and I feel loved by those around me rather than shamed. Whereas I would have spent most of my time before closed off and afraid to talk about who I was, I now help others in the same situation. Whereas I would have been torn apart before by accusations of femininity on my part, I now face those statements with pride.

Like Genji, I have accepted the part of myself that used to embarrass me most, and it has only made me stronger. My warrior spirit burns.

McCree – Who you kidding? McCree is Overwatch‘s true shooter
Pharah – Don’t play fair, play Pharah, exclusively
Reaper – In defense of Reaper, the patron saint of mall-goth teens
Soldier 76 – Soldier 76 is here to make everyone else look good
Tracer – A series of limericks about Tracer, because why not