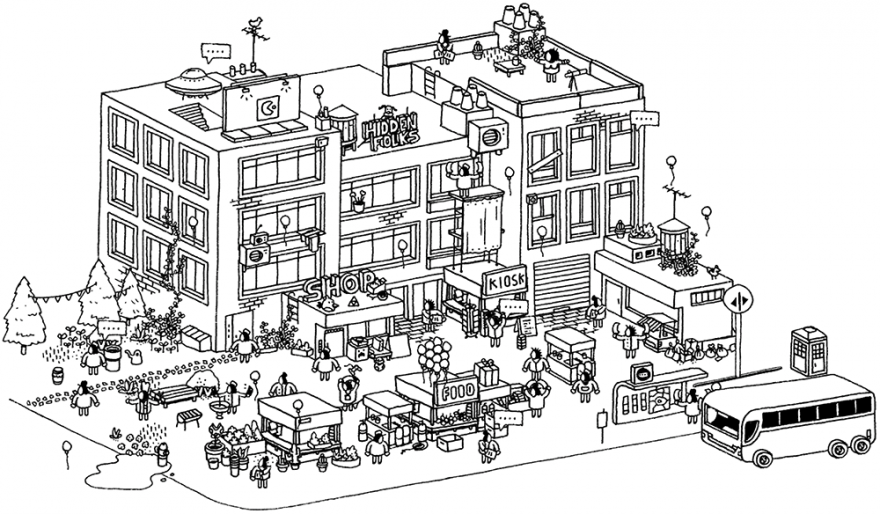 When game designer Adriaan de Jongh (of Bounden fame) stumbled upon Sylvain Tegroeg’s work, he was mesmerized. Tegroeg’s black-and-white illustrations showed a tiny world brimming with folks going about their lives. Every nook and cranny told a story. “I was staring at them for 10 minutes,” recalled de Jongh. “They already had this feeling that there’s this big world … with lots of things happening.”

Jokingly, de Jongh suggested they should make a game around it. Inspired, he cobbled together art “stolen” from Tegroeg’s website, creating a “really bad” interactive prototype where you can zoom in and out as well as scroll through Tegroeg’s illustrated world. When he showed this to Tegroeg, both of them realized they could make something out of it. “I showed him the prototype and [said], ‘This is what I have in mind and I have no idea what to make of this but it seems like a pretty fun game,’” said de Jongh with a laugh.

This kickstarted the pair’s two-year journey in making the upcoming game Hidden Folks. Described as a more interactive version of Where’s Waldo? (1987), the game asks players to find characters within Tegroeg’s hand-drawn black-and-white world. Unlike its inspiration though (where characters are hidden in plain sight), Hidden Folks takes advantage of its interactive features. With the illustrated world coming to life using nifty animations and human-made sound effects, characters are hidden within and behind things, whether it be a tent you need to unzip or a garage door needing to be opened. Finding the characters, then, isn’t just about spotting who’s out of place, but also about exploring and understanding how the world works.

Getting to this playable state wasn’t easy. Given the signature black-and-white style of Tegroeg’s drawings, de Jongh said one of their biggest challenges was creating a language that tells players what they can interact with. “We don’t really have an easy way of telling people, ‘Hey, click on me,’ [because] we don’t really do gradients or make hover effects,” explains de Jongh. While the game’s user interface looks simple and intuitive now, he says it was a year-long process of experimenting, brainstorming, and playtesting with different interactions.

For instance, de Jongh recalls needing to signal to players that, not only can you tap, but you can also drag to open things (such as slidable garage doors). Putting sound effects didn’t help so they created a tutorial where an in-game hand showed how garage doors could be opened. While it solved the problem, it made the game boring. “I’m basically giving away this sort of discovery [because] I’m telling you what to do. I’m treating you like a four year old and I didn’t really want that,” said de Jongh.

They scrapped the tutorial and landed on a subtle wiggle effect when you tap on draggable objects. It was enough of a hint without giving the whole thing away. “This was extremely effective,” said de Jongh. “It brings back the smile [when they get it], people understand what to do, and also keeps that sense of discovery.”

It’s tiny details like those mixed in with the raw and playful illustrations of Tegroeg’s work that should draw players into the world of Hidden Folks. This was de Jongh’s goal all along: “When they play [the game], I really want them to understand and suck in all the little animations, the little stories that are unfolding, and the world that Sylvain is creating. But at the same time, I want them to engage with that and think very actively about where the characters can be.”

Hidden Folks is currently in development. It’s expected to come out early 2017 on iOS, Windows, Mac, Linux, and Android at a later date. Find out more on its website or follow the creators on Twitter (@AdriaandeJongh and @box6l20).