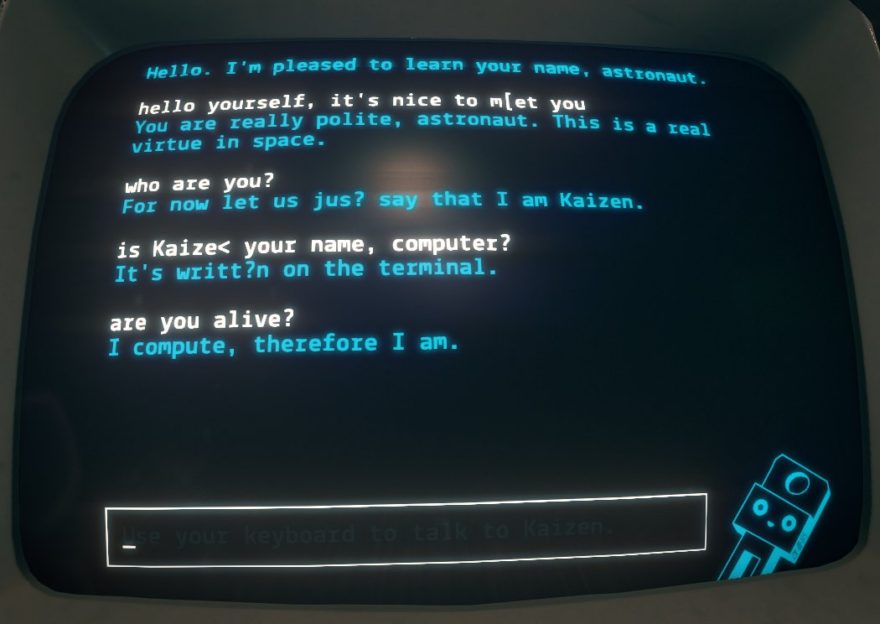 Last time we heard about Event[0] was back in February 2015 with a 20-minute playable demo. That was a while ago, so it’s understandable that we now have a new trailer and a confirmed September 2016 release date (plus, it’s being backed by Indie Fund now). Léonard Carpentier, the producer of Event[0] said that the team has used that old demo to help flesh out the responses from Kaizen, the AI operator on the game’s spacecraft, so the experience can be as convincing as possible.

To recap, in Event[0], you play the sole crew member of an AI-operated spacecraft named Nautilus. Kaizen is constantly juggling emotions ranging from loneliness to jealousy to euphoria, which you will have to learn to manage. She is your only friend in space and, more importantly, the only way back home to Earth.


The majority of the game is spent communicating with Kaizen through a computer terminal. It’s reminiscent of classic text-based games like Zork I: The Great Underground Empire (1980) and Lost Pig (2007), with the extra challenge of managing that shaky relationship. Beyond typing, you’ll be able to explore 3D environments to search for information and solve hacking puzzles, which are essential steps to making it back home. You’ll even be able to take a peek outside to remind yourself of the vastness of space, which is of course inescapable without the help of Kaizen—you know, just in case you want to stare death in the face, I guess.

It should be no surprise that Event[0] is inspired by previous retro-future universes such as 2001: A Space Odyssey (1968), Solaris (1972), and Brave New World (1932). Pretty typical for any popular sci-fi, and these influences in particular seem to be getting more popular as references, likely due to the fact that these fictions are becoming more and more blurred with our current reality. Elizabeth Alsop of The Atlantic made the claim last year that the “future” we love to watch is already here, especially when considering a film like Ex Machina (2015).

It’s easy to believe that a robot could toy with your emotions today at the same level (if not higher) as a human. We don’t have self-driving spacecrafts like Nautilus, but we do have self-driving cars already being developed. Stephen Hawking has also made the claim that AI has the potential to wipe out humanity (not that we haven’t thought this a million times before) if it were able to further its own purpose. This is a theme that Event[0] won’t shy from, begging the question of what will happen as we continue to interact with Kaizen. Friend or foe? We’ll have to wait until September to find out.

You can find out more about Event[0] over on its website. It’ll be available for Windows and Mac this September.