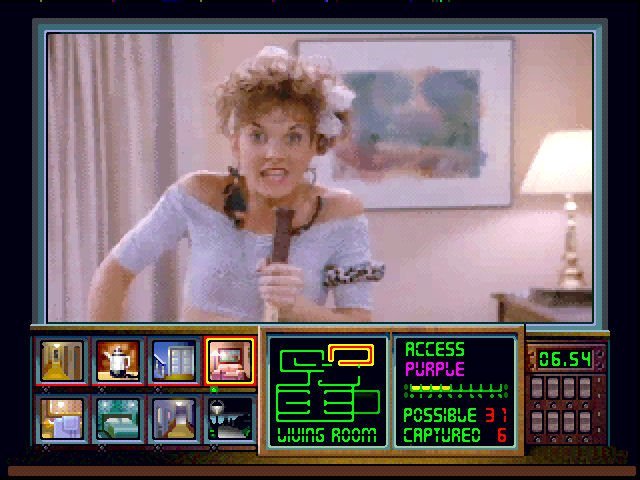 Ah, the elusive Night Trap Fan. You hear of them often, but actual sightings remain a rarity. The creators of the infamous 1992 FMV (which, in part, sparked the videogame backlash that lead to the ESRB ratings we hold dear today) spoke about their many legions of fans last year when the Kickstarter sent ripples through a decade-old fanbase. Yet, despite the enthusiasm of this super fan group, the desire to see their beloved classic revamped fell just $290,000 short of what the developers demanded.

But fear not, for the devotion of the Night Trap fan knows no bounds and cannot be measured in dollars. Dave Voyles took matters into his own hands, deciding to port the iconic Mom jean wearing, auger-infested world to browsers in a mere 45 minutes (and for free, I might add). His prototype version isn’t perfect: there’s little to no interactive options available, so the scenes usually end with a declaration of your ineptitude (“Looks like you’re not up for this mission,” laments SCAT team commander Simms before cutting communication with you.)

Regardless, the port of over a decade old FMV to HTML 5 is undeniably impressive computing wizardry, Dave Voyles proving himself to be more that just a mere super fan of Night Trap. He’s basically the goddamn Nicolas Cage of a videogame version of National Treasure (without all that excessive eyebrow acting, that is). In a blog post, he explains how he made sense of all the raw data he had to go through —a difficult task, considering the fact that the files were named after seemingly random sets of numbers. “It was like fitting together the pieces of a puzzle and *hoping* that there would be a picture at the end,” he says. “My faith in the project began to dimish at this point. Perhaps they were organized by size? No, no, that wasn’t it. They were all numbered, so those numbers had to mean something, but what? And who would I even ask?”

Voyles’ notes for cracking the code look like something straight out of Rain Man: a series of numbers that mean nothing to me (as a computer illiterate jackass) but surely reveal hints of an under-appreciated genius. Soon, Voyles realized that “the tens [digit] represents the room. The single place digit represents an event of some sort. For example, some end in B, which means that it is a branching path, and I could capture an auger in this clip.” Right, right. What he said.

In the end his perseverance paid off, and Voyles succeeded in giving new audiences a taste of this delectable piece of videogame history. No matter how ridiculous Night Trap might look to a 2015 audience, anyone who has ever loved a game as a child understands the joy of reviving a childhood love and sharing it with the modern world. Voyles loved Night Trap as a kid, admitting that, “Sure, it’s cheesey, but at the time I thought it was remarkable. I went from playing 2D side scrolling platformers to what felt like a film that I was engrossed in. I went through it more times than I could count and had several perfect playthroughs, where you catch every auger.”

the joy of reviving a childhood love and sharing it

Though he hasn’t given any updates since June 17th on the status of the port, I don’t think this is the last we’ve heard of Voyles’ valiant efforts to relive childhood memories. Last we heard, he was looking to enlist help on a spreadhseet documenting the time stamps for when each scene beings and ends, and whether or not a character can be captured.

You can “play” Night Trap through this link. If you’re interested in expanding on his work, check it out on GitHub.