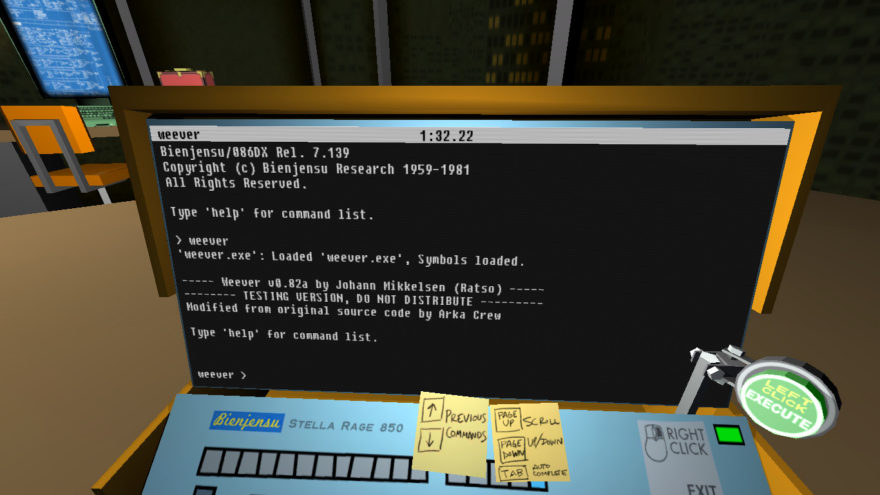 Quadrilateral Cowboy, the next game from prolific game maker Brendon Chung, is coming out for Windows PCs on July 25th. That is very soon. Unfortunately, if you’re running Linux or OSX you’ll have to wait until September this year to get the game. Still, that isn’t too long… right?

Chung is probably best known for the two-game bundle made up of Gravity Bone (2008) and Thirty Flights of Loving (2012). Gravity Bone has a full-fledged set of opening credits, and refers to films like Wong Kar Wai’s Days of Being Wild (1990). Thirty Flights is an ambitious game that explores the limits of environmental storytelling and adapts the filmic language of the jump-cut to a first-person perspective.

gradually teaches players to understand a language of commands and timers

While Quadrilateral Cowboy is also about international crime and is set in the same 1980s retrofuture, it is “considerably larger in scope.” It will hand players a hacking rig, coach them to use a fictional programming language, and assign them two teammates with whom to choreograph the most intricate of heists. Chung has said the game takes influence from The Lost Vikings (1992) and Super Time Force (2014) in that it allows the player to switch between these characters on the fly, so she can be taking down doors or lasers at a distance with one hacker, and running another through obstacles at the same time. It’s a system that gradually teaches players to understand a language of commands and timers that encourage speed and mastery.

Quadrilateral Cowboy has been in development since early 2012, and as one of the early adopters of a growing trend in independent development, Chung has been streaming his design and development processes since at least 2013 because he believes it keeps him on task and can provide useful strategies for viewers interested in the game but also in game design.

Quadrilateral Cowboy will be coming to Windows on July 25th and to Linux and OSX in September of this year. You can find more information on the game’s website and Steam.