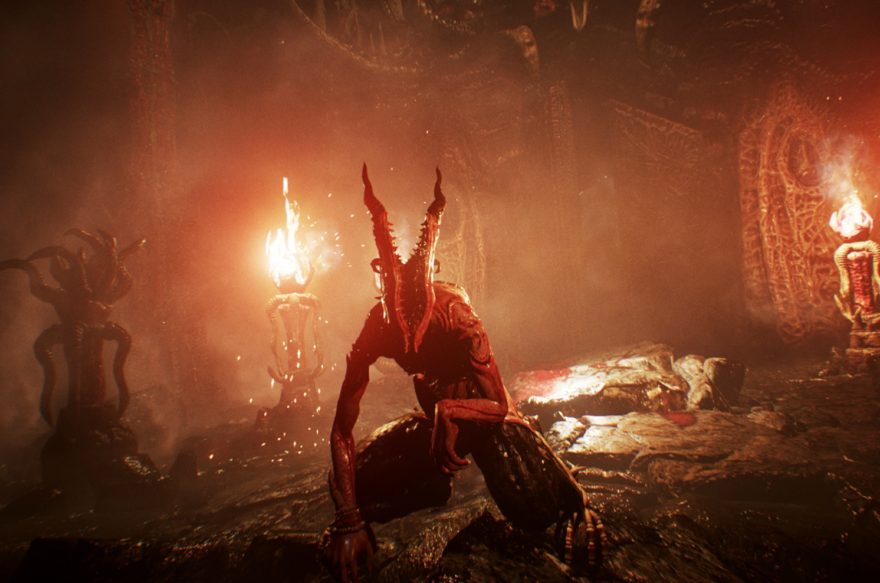 Who do you think was the first person to start wrecking shit in Hell? It couldn’t have always been a nightmare ditch fraught with furious anger and the scabbed lamentations of sinners. Someone must have made like Saturn in Goya’s famous oil painting and started to devour all their children or something. Once you’ve gone that far you may as well start stuffing people in stone holes and, heck, why not, let’s get some others to start punching each other’s teeth out in the River Styx. Go on, we’ll have a swell time. What’s that? The perfumed scent of decay and fetid matter. Cor, you’re spoiling us now.

Our visions of Hell (and by “our” I mean the West) are plagued by terminal repetition. When you think of Hell you probably see—no wait, let me guess—”horned demons, lakes of fire, and tears of thousands of suffering people.” That’s how Tomasz Dutkiewicz of the Poland-based MadMind Studio describes it. And yeah, he’s right, that is what most of us see, and what we often get in modern depictions of Hell. If we’re talking videogames then DOOM is classically aligned with goat imagery, and then there’s Dark Souls, which picks its hellscapes from the ripe tree of Dante Alighieri’s Inferno and the many paintings and illustrations it has lent itself to.

All of these classic references are great—that’s why they’ve lasted so long, why they’ve haunted the religious and non-religious for centuries. But, in creating its own version of Hell, MadMind Studio has decided that to contribute to this ouroboros of demonic imagery isn’t enough. “To induce anxiety, fear, and shivers on your back, you cannot rely only on well-known images,” Dutkiewicz tells me. “You must reach deep into your own mind and get rid of the limitations, drawing inspiration from there. This is the only way to reach deep-seated fear of death and suffering. Agony will draw inspiration mainly from this place.”

Yes, Agony is the name of the game here (quite literally), and it’s agony that is delivered. In its trailers for the game, MadMind has, so far, shown scenes of people wretched with a pain that’s written all over their face, bent back in naked suffering, as well as thumbs pressed into eyeballs, and scraggy sinners screaming from the inside of a flower with petals made of giant arms. There’s an eight-minute trailer that shows some kind of sick corridor made of undulating throats and another “Extended” trailer that’s full of bridges laced with sinew cut between snarled mouths pressed too close to the camera for comfort. The best bit might be a scene of what appears to be condensed body parts whirling in unceremonious unison, as if a donut-shaped granfalloon on a spin cycle.

What is going on in this depiction of Hell, then? The most Dutkiewicz tells me is that the denizens of Agony resemble a cult in that they’re obsessed with the Red Goddess. The reason being that she is the only memory that everyone who enters this Hell has. “Everyone is trying to find her, with hopes for redemption and a way to escape from their faith,” Dutkiewicz said. “People are making unbelievable, almost unreal constructions for her glory, they are worshiping her image and praying to her, with hopes to improve their current position.” The theory these sufferers have is that the Red Goddess designed the place they’re trapped in. And because of that they reason that she knows the way out. It’s not just the people, either. “This concept also [has] a reference in the world of demons,” Dutkiewicz adds. “Those beasts are trying to copy their goddess. They are using all the primitive desires to distract and temp terrified male and females. It’s their specific way to impress the goddess.”

As the player, your role is to find a way to meet the Red Goddess so you can escape. But this is Hell, and nothing is that easy: this is a survival horror game after all. The eight-minute trailer sees Agony resembling the Amnesia series most of all, with a demon hunting the player down, and them having to hide in the dark to avoid whatever malicious plans it had for them. The comparison holds up according to Dutkiewicz. However, Agony goes in a different direction too, as you will be able to fight back—being defenseless is vital to the successful terror of the Amnesia series, so this is a big diversion. This is shown in the trailer as the player picks up a torch and uses the flame to scare away the predator. But this is only the beginning.

the lid is shutting over the hellhole once again

It turns out that the main character has the ability to possess other creatures. “Players will be able to possess simple-minded demons,” Dutkiewicz said. “By using them, they will be able to fight other beasts, and unlock passages. It will often be up to the players what body they are choosing to control, and what kind of gameplay fits them at the moment.” As you go deeper into the abyss, you’ll need to learn to make the most of this ability, becoming more brutal and cunning as the demons do too. There are also story implications behind the possession ability, as Dutkiewicz said: “What makes him so special? Why is he so different than others? This is one of the questions [the main character] is trying to understand and ask [the] Red Goddess.”

MadMind has been keen in recent weeks to show off their work on Agony, giving us a taste of what’s to come. But now the lid is shutting over the hellhole once again. You probably shouldn’t expect to hear too much more on the game until it is out. Listen for the screams.

Agony is coming to PC via Steam in the second quarter of 2017. Find out more on its website.