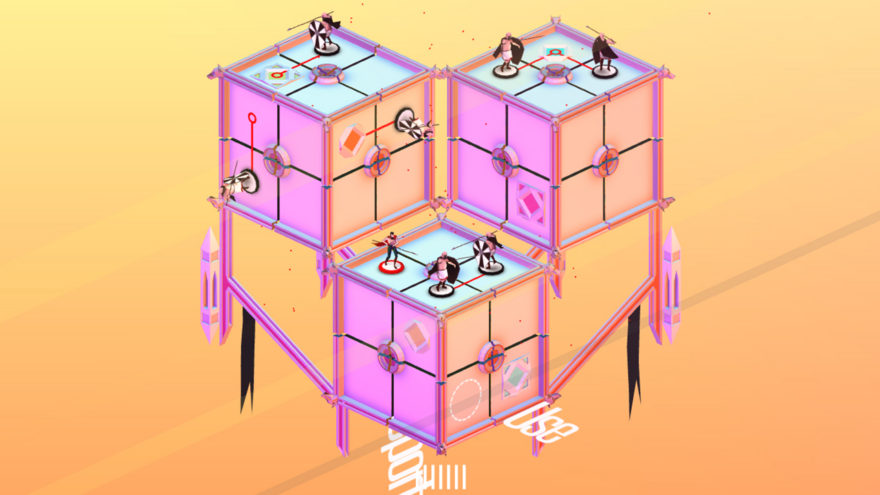 One videogame that should be on your list of ones to watch in 2017 is, without a doubt, Euclidean Lands. It’s the work of Miro Straka, a Slovenian architecture student at the University of Applied Arts in Vienna, who decided to make a puzzle game in his spare time. After a few years he’s coming to a close and is looking to get it out on mobile soon.

You can immediately see the benefits of Straka making a videogame alongside his studies. Each level in Euclidean Lands is a diorama of shifting geometry; impossible feats of architectural complexity. A line like that should immediately draw comparisons with Monument Valley (2014)—an act of flattery that I believe Euclidean Lands holds up to—but there are some big differences between the two.

more rooted in the mechanical puzzles of Ernő Rubik

For starters, while Monument Valley made an effort to be silent with its storytelling for the most part, it looks like Euclidean Lands will feature big bold text that zaps into view at certain moments to surface its narrative. But the biggest distinction, of course, is the level design in both games. Monument Valley took a leaf out of M. C. Escher’s well-work book to blur the line between illusion and reality—separate platforms could be magically joined through perspective alone. Whereas Euclidean Lands is more rooted in the mechanical puzzles of Ernő Rubik (i.e. the Rubik’s Cube), which means you spend your time spinning and rotating structures and walkways to create paths.

The addition of grid-based combat in Euclidean Lands also means it ventures into the territory of Square Enix’s mobile puzzlers, including Hitman GO (2014), Lara Croft GO (2015), and Deus Ex GO (2015). However, Euclidean Lands takes those concepts further due to its commitment to non-reality. In the GO games, for the most part, you have to abide by the laws of gravity, the terrain mostly being fixed. But in Euclidean Lands, because the levels are more toy-like, gravity is constantly shifted (or ignored entirely), as your hero and the enemies move at all angles without restraint.

As we haven’t checked up on Euclidean Lands for quite a while (nearly two whole years) there are plenty of new levels that Straka has been sharing to have a look at. The two below, for example, are a great demonstration of the multiple angles you can approach enemies from.

The next GIF proves that it’s not only enemies that endanger you, but also large-ass spikes that piece tiles as you move across them.

I have to show off the next one as it’s one of the best level select screens I’ve seen. I love how fragments of stony architecture are used to represent levels.

Back to the levels themselves, here we see the game’s bridges in full swing. You’ll need to connect them to cross from cube to cube, at the hazard of running right into an enemy.

And finally here is one of the boss levels in Euclidean Lands. Looks like a classic goat-like devil figure in this one, who remains still, ready to strike as the player attempts to find an angle to attack from I presume.

That’s all for now. As said, Euclidean Lands is nearly finished and should be out shortly. You can be notified when by signing up on its website.