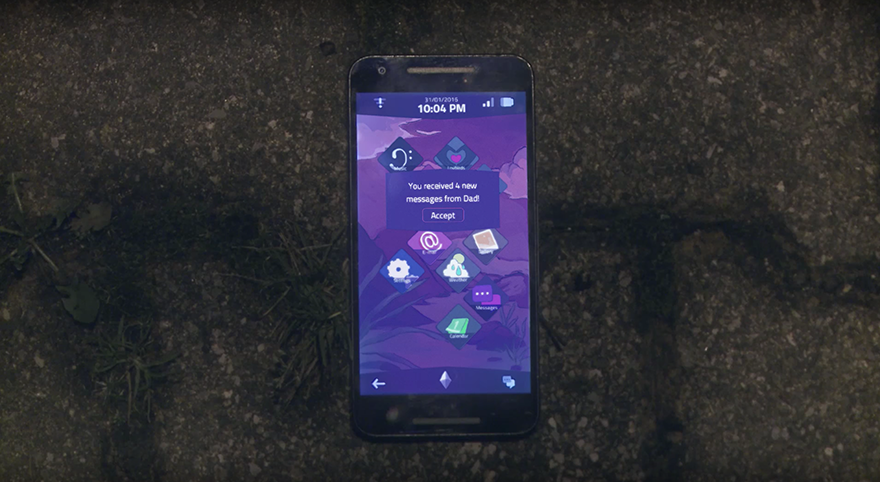 It’s cold. You burrow further into your scarf, hoping to shield more of your face from the harsh winds biting at your cheeks. The streetlights do little in their attempt to guide you along the cobblestone street—the fog is too thick to distinguish shapes. As you walk, you squint against the way the light disperses among the thick mist, resembling soft glowing orbs that float in the night sky.

The weight of your boot crunches against something that is not pavement. You glance down to find that it’s a phone. Removing your hand from your pockets, you bend down to inspect the device. The screen is completely intact. For all intents and purposes it’s a normal, lost phone. But what do you do with it?

A Normal Lost Phone is the result of a well-received prototype conceived during Global Game Jam 2016 by independent French developers Accidental Queens. Through the help of two external collaborators, the prototype has been polished and expanded upon to create a full version that will be released on iOS, Android and Steam platforms on January 26th, 2017.

The game features you as the founder of this lost phone that belonged to Sam, and it’s your job to search through messages, apps, and pictures in order to learn more about the former owner. Through investigating the device, you’ll learn more about what happened to Sam when they turned 18 and mysteriously disappeared. According to their press page, Accidental Queens hope to “create games that feature never before seen mechanics, exploring topics from everyday life and social questions, through innovative narrative tools.”

Exploring a smartphone interface is a feature that has been implemented through other titles like Sara is Missing or Cibele, where players are asked to sift through the personal lives of their owners in order to learn more about them. A Normal Lost Phone will be different in that it will address issues like “coming of age, homophobia, depression and peer pressure” alongside opening text messages to read so you can form an opinion of Sam.

The game will want to implore to your empathy and your curiosity as you investigate the content held within a seemingly ordinary piece of tech. In a previous interview Diane Landais, one of the co-founders of Accidental Queens has gone on to say that “Every phone tells a story, the story of its owner…It’s just not a story that can be told, nor is it a story that can be seen. It’s narrated by whoever gets access to the phone, and is shaped by the way this person sees the world, by their habits or prejudices.”

To learn more about A Normal Lost Phone, click here.