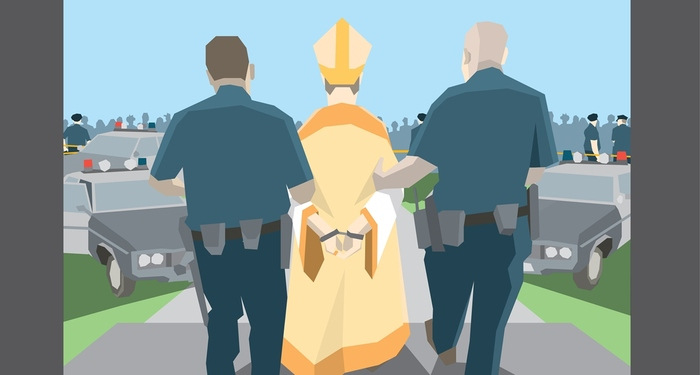 If you feel that your life is tragically devoid of smoky, noir-ish monologues and moral ambiguity, freshman game developers Weappy are working on a game that might help you scratch that itch. In their current project, titled This Is the Police, you play as an over-the-hill cop named Jack Boyd—voiced by Jon St. John of Duke Nukem fame—who is being forced into retirement by the Freeburg city mayor. Displeased (to say the least) with getting shoved out, Boyd resolves to put his morals and professionalism in the past and to use the next 180 days to make $500,000 by whatever means necessary. But for the remainder of your tenure as police chief, you also have to command Freeburg’s finest, which will involve managing your officers, responding to crimes, and even running press conferences.

While questions about police corruption are something of an open wound in the US, This Is the Police seems more interested in exploring the moral intricacies in the life of a man who needs something more as he approaches his golden years. The game takes cues from Lucas Pope’s Papers, Please by allowing players to make quick and meaningful choices from within a bureaucracy backed by substantial power and to allow you to hide choices that could get you locked up or worse. (It’s another look into the quotidian lives of videogame characters, as we explored earlier this week.) In the end, you could make out like a bandit … or you could, as Weappy’s Kickstarter says, end up “with a bullet in your guts.”

According to the developers’ projected timeline, the game is still close to a year away from completion, but if This Is the Police is able to deliver on some of its very intriguing promises, it looks like a game that could have you mumbling Training Day quotes at your computer into the wee hours of the morning.

Find more information about This Is the Police on Weappy’s Kickstarter page here.