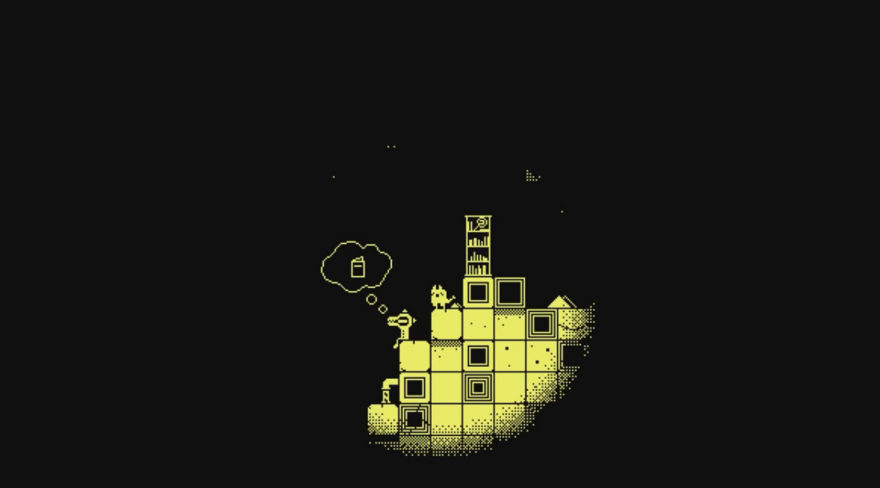 Everything is enveloped with darkness. You are a creature that thrives on electricity. You fall into a strange underground world; separated from your loved ones, you must find a way to get back to the surface. This is the premise of the game PLLUG, created by carpetbones. With simple keyboard controls, you wander around a maze-like landscape, encountering other strange creatures, and must absorb energy to keep your surroundings lit up in order to make your way home.

each nook and cranny takes on an element of interest

Development of PLLUG started in 2013 and although much of the art was completed early on, carpetbones hand-placed over 12,000+ blocks in this project. While this sort of repetitive labor and attention to detail is hard to imagine, it really shines through in the world itself. With the mushrooms, grass tufts, vines, chains, rocks etc. which ornament the different types of blocks, each nook and cranny takes on an element of interest.

Exploring the different parts of the underground is a work of trial and error because of this, where being lured to a new corner may lead you inadvertently back to where you came from, or into a dead end, only to realize there was nothing of real value there. Although this happens fairly often in the game, it all feels a part of getting to know the world better, rather than being a frustration.

Sound is an important part of PLLUG. The most obvious part of this is its varied and ambient soundtrack by rabbitgirl, which ranges from soft and gentle, to eerie and ominous, depending on the areas of the underground you’re exploring. However, the sound design of the world itself is also quite noticeable. For example, when you walk through flowers scattered across the levels, they give off a chord each time you pass. This makes the flowers feel significant somehow, and part of a larger mysterious world. These types of small details give the underground life.

There are other elements of the game that hint at further mystery, such as the strange creatures you come across on your journey, some of which give you quests, non-verbally through means of symbols, and others who simply occupy the world quietly. There is also the strangeness of the technology — how initially you absorb energy mainly through lone lampposts, surrounded by old stone blocks and rickety bridges, and later come across street lights and blocks and architecture which seem more advanced. These differences allude to a rich and unknown history of the underground and its different spaces.

Without any voiceover or text, PLLUG‘s narrative and world remain mostly obscure. However, the detail of the world and its inhabitants allow for a player to fill in the gaps and make their own conclusions. Finding your way through the dark, with varying levels of light, makes vision a commodity here that allows a player to more appreciate what they do see. Unlike many other games which employ darkness to evoke horror, PLLUG‘s darkness evokes curiosity. Despite its short play time of around half an hour, there is a lot to be found in the underground depths of PLLUG.