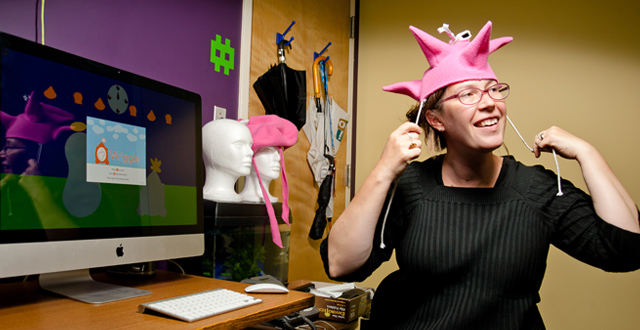 Excerpts from a conversation with Katherine Isbister, associate professor at the Polytechnic Institute of New York University and director of its Social Game Lab, conducted for the piece “How Does It Feel?” in Kill Screen Issue #3.

Can people become too attached to their virtual characters—like the MMO players in Asia who have died at their computers, or the people who become obsessed with Second Life?

I think it has to do with boundaries in people’s lives. I’ve definitely met people who have gotten stuck in their everyday lives and are tuning out using a computer, whether it’s for Internet surfing or gaming.

If you find an accepting community on the other side, in that computer; and at the same time, you’re feeling really left out of the world in everyday life, I think, for some people, they just dive all the way in. If they could, they would crawl into their computer, because they’re just not happy with being in this world. But [there’s] always been an issue of people just hiding in a mediated experience, just checking out of real life. I think it gets more compelling and more persistent when there are other people meeting you in the middle.

Have you studied personal relationships that have been built in games, like people who meet in MMOs and then in real life?

I haven’t done so much of that. That’s more the anthropological side. But […] we have definitely looked a lot at how players create a “pseudo-relationship” with a non-player character.  When people have a lack or they’re lonely in a certain way, or they’re at a point in their life where they’re isolated for some reason, they gravitate towards this interesting mediated experience that gives them some of the feelings they would have in a real connection.

At first, I was really creeped out by [dating sims]. I read the New York Times article, and I was like, “Oh, these people are so freaky.” But then I actually started to play, and I realized—yes, some of them were totally pornographic, but some of them are these kind of winsome, sweet little romances. “Oh, here’s where you meet the person for the first time. And what will you say? How will that influence her?”

It reminds me more of junior high, where people are just learning how to navigate relationships, and playing with the emotional tonality. When do you know if someone’s interested? What’s a safe thing to say? And what’s not? It’s kind of beautiful.

That’s when I was like, “Whoa, these [relationships in these games] can be subtle and beautiful.” This is an art form. Maybe some people fall down the rabbit hole, get utterly lost in it and overuse it to make themselves feel better. But it’s actually really powerful, artistic stuff. And it’s weird that we judge that right off the bat. Or that those become the narratives about what the medium is doing: “Oh, [gaming is] addicting people. Oh, people are lost in these pseudo-relationships.” Well, why wouldn’t you think, “Wow, how interesting. How potent and powerful that is! What could you do with that, that would be transformative for people?”

For example, I don’t know if you’ve read What Is the What by Dave Eggers, but he interviewed this guy from Sudan that went through a bad genocidal episode. The guy ended up in Atlanta living there as a refugee, and Eggers basically helped him write an autobiography. And so my thought was, what if you actually used this potency of connection to connect somebody to somebody else like this, through a game-based experience? Take that empathy or desire to connect, and the responsiveness over time that a dating sim has, and use it to provide a transformative connection to somebody whom you normally would never encounter in everyday life?

I think a lot of it comes down to [the commercial imperative], that the companies that get into it go for a predicable experience they know will be marketable, and it’s always sex or violence at first. [Laughs] And then independent people, when the tools get accessible, start exploring the emotional terrain in a more sophisticated way and come up with interesting alternative experiences.

[Game designer] Clint Hocking gave a talk last year about what’s next after immersive games, about [game immersion as] a Generation X fantasy that comes out of the holodeck from Star Trek and The Matrix—that you want to get lost in a world and unhook from the meat of your body and be gone.

But he doesn’t really think the generation coming after really has that fantasy in their bodies. They actually like the notion of a blended world where you flow in between those spaces, and maybe you’re not tethered to a screen where you have to dive in and be in some other place. […] You could be floating around, because you’re combining all of these social connections. I think that’s a more flexible vision, and a more evocative vision for what games can be.

I think that sort of sensory overload [means] you really have grabbed the person by the scruff of the neck. You have a lot of power to craft an experience that they can have with others. But I also think half of what’s cool about games is the autonomy of the person. And so, it’s about getting more graceful about the dance [between the immersion and autonomy], in different modalities.

You mentioned that one of your projects is to show how to teach math through games, but a lot of people think games are just for fun. How do you think the medium can overcome that barrier?

The thing is, videogames are a medium; they can do so many things. I think the problem we have is that “game” is a cultural label that’s got a little tiny box. It’s like “comic book” and “videogame” sit side-by-side. And they’re very delimiting boxes. But games are so powerful. I think it’s really too bad, in a way.

What I think is cool about the “game” label is that it hints at a disregard for orthodoxy and a freedom to push the boundaries. That maybe nothing is off-limits, and it’s OK to be exploratory. It’s funny, but that’s actually why educators really want to bring games into the fold to teach, but it’s also why they’re scared of them. They would prefer to tame games [into] little games that you see that are so safe.

I did a project where we interviewed game makers about games and learning. And a lot of them said games are learning engines. You can’t play a game without getting scaffolded into the mechanics and understanding the system, and half of what we do as game designers is create that beautiful arc of learning and mastery.

Educators are starting to pick up on [how] game makers actually are masters at taking this interactive medium and bringing someone into the content in a really graceful and enjoyable way, like a really good teacher does. So how do you take that really clever adaptive scaffolding, and that sort of subversive energy that comes from “I choose to play, so it’s totally fun for me,” and work that into teaching, whether it’s in schools or out in the world?

As you said, while people want games to teach players certain things, they also don’t want them to learn certain other things from them, like violent behavior…

Well, I understand the concern, because games are performative, and they indict you as the participant much more deeply, I would say. With a movie or a book, you can go, “I was just reading it. I wasn’t doing it.” And there’s something that makes people a little queasy about games, because the player is performing that. But I think that people are very smart, and they don’t typically confuse mediated activity with real activity.

In a way, the surface of games, and things like the war games that the parents see, creates a mistaken impression about what’s happening for the person underneath the surface. I actually think all of the hullabaloo about games and violence will completely die down in about five years. That’s how long it will take for the people who played all their lives to get into these positions of power, and they’ll fully understand, “Oh no, I played those when I was a kid and I’m fine.”

Yes. Well, it’s scary. Every time [some cultural innovation] happens, whether it was comic books or movies, it feels really powerful. And it’s like, “Oh no, my child is going to be corrupted and turned into a crazy freak.” [Laughs] But when it’s you and you’ve been through it, you’re like, “Nah, I’m not going to be fooled by that.”

It’s a deeper cultural question; if you rehearse certain thoughts or certain activities, that does shape you. I don’t think it automatically turns you into a murderer, but I think it can make you less sensitive to some things and frame your world in certain ways. And I think that’s the conversation to be having. What does the culture, as a whole, value? How do the media that we consume frame our reality? How do we address that?

So rather than saying violent games make people kill other people, it’s more like they may desensitize some people to violence or affect their worldview in some way?

Right. For example, some people blame the Civil War on the book Ivanhoe. They talk about how [author] Sir Walter Scott influenced this whole generation of potential Confederate soldiers who read this romantic novel about going into battle and became convinced to just run off and go to war. So I think that’s more the interesting cultural question. Where are those weak spots, or places where people could potentially get manipulated? And what form does that take, and how do you talk about it?

I heard a guy talking about the America’s Army game, and he was saying basically, “Look, there are all these tech-savvy young men who weren’t going into the army anymore, and we had to figure out how to get them in. And what we realized was, ‘Oh, they’re all playing videogames.’ If we make a videogame, we can introduce them to what we’re all about, and it can be a very potent form of recruitment. Because we can’t really offer better salaries.” This was during the dot-com boom. “We can’t really pay them more than the tech jobs they can get in the commercial world, but maybe we can inspire them to serve their country.”

That’s where I feel the discussion needs to happen. How are media used in the service of other things? Where are the weak spots in the culture where people are vulnerable? I don’t think it’s so much about individual vulnerability. It’s more about cultural-level gaps or blind spots.