“The cards I throw away are not worthy of observation or I should not discard them. It is the cards I play on which you should concentrate your attention.” – Winston Churchill, 1912, during a bridge game on the Admiralty yacht Enchantress

Churchill has been on my mind a lot lately.

It’s hard not to be wowed by the man, his tenacity, his military tactics, his signature three-piece suits.  When obstacles arise in my research or when I bump into my wargaming ex-boyfriend, I think to myself What would Churchill do?

I’m not the first American to be fascinated by Churchill, and I certainly won’t be the last. Take it from Mark Herman, who named an entire tabletop game after him:

“I decided to call the game Churchill as it was his voice that gave me the keenest insight into the mind of a world leader at war. Roosevelt and Stalin were the other players in this drama, but they had not left an equivalent written legacy, so it was always Churchill’s voice I heard as I worked through the design.”

Still, I’ve found that however much I might admire the man, it’s hard to take a consistently Churchillian approach in life. Not all social and scholarly barriers can be broken down with a top hat. We can’t all be bold and brave and British, hard as we may try.

What would Churchill do?

I have learned this lesson slowly but surely in the past 18 months while studying Guantánamo and trying to make a game documenting the power struggle in the war courts and the detention facility. It’s a dark world to probe. One respected British legal mind, Lord Steyn, went so far as to call it a “legal black hole.” As a researcher and a civilian, I’ve found that it can be a bit of a swampland. You have to be a bit militant to make sense out of anything happening at Guantánamo, or GiTMO as it’s often called. You have to try to find your inner Churchill.

Things unravel. Partnerships fall apart. For many moons I, a researcher of war, dated a wargamer, someone who could speak about counterinsurgency and chalcogenides and Sherry Turkle all in the same breath. I saw in him a collaborator, a partner in crime and in creativity. We talked about GiTMO, the events and episodes that defined the place, the people, and the policies. I even started to toy with putting a prototype wargame together. In the aftermath, when we ceased being a we, instead of continuing to build my dream wargame, I thought of the 70 episodes of our relationship, moments in time, when certain words had been uttered, when certain cards had been played. I looked at my life, my proverbial deck; bafflement turned into more bafflement, until clarity came.

Wargames can be downright Tolstoyan. You can end up in some form of cognitive Siberia if you don’t make an effort to understand the rules. There are so many components. In the wargaming world, some people go gaga over the stickers. Others get their kicks out of cutting counters. Me, I went for the cards.

I grew to love event cards, so much so that I’d often burrow into a deck from a random wargame whenever I wanted an escape from my M.A. thesis on Guantánamo. There was something intangibly magical about them. The cards empowered—made me forget all those hours in middle school that I’d lost trying to draw timelines out perfectly. Maybe it helped that my boyfriend couldn’t always handle the deck. He had mastered so many elements of wargaming, but shuffling wasn’t his forté. It was liberating to have a skill in a world that was so foreign. The idea that history could be jumbled and reassembled gave me this giddy feeling.

Event cards helped me become comfortable with wargame design. The first deck I really loved and explored belonged to A Distant Plain (2013), a wargame about contemporary Afghanistan. I considered how my Afghan friends would critique the narrative put forth in the deck and the board. What would they think of this attempt to boil a segment of their nation’s history down? Omission, deletion, marginalization, and exclusion—these are issues that always bubbled up in my mind as I shuffled through the deck.

I had mentored a group of Afghan women writers, many of whom were based in Kabul, and I always wondered, if they had been taught wargame design, how might their deck have differed? Instead of having a card devoted to “Koran Burning,” would they have given a card to mark the murder of Farkhunda Malikzada, an Afghan woman falsely accused of burning a Qur’an? As wargame designers Volko Ruhnke and Brian Train crafted their A Distant Plain (2013), which cards had been edited out? 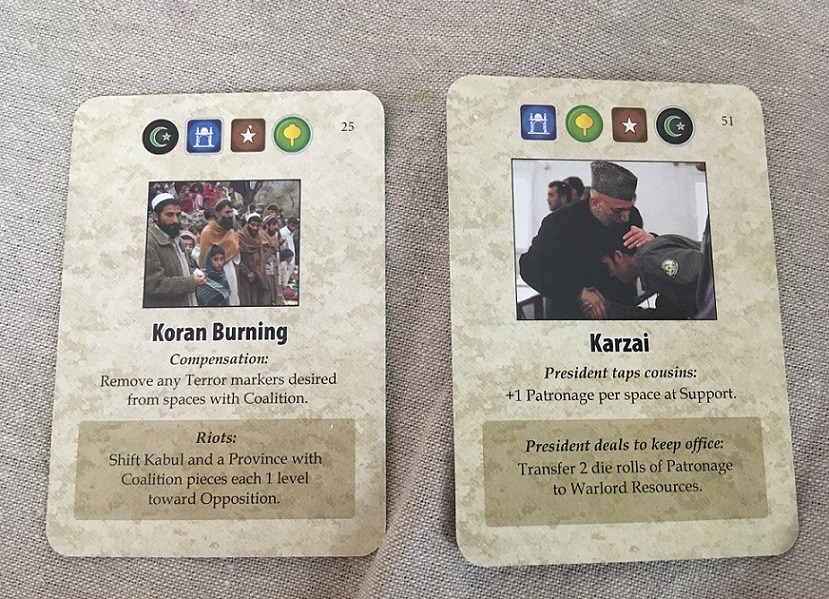 In MIT Press’s Zones of Control, wargamer Jeremy Antley explains that “taken together, the board and event cards create a materialistic, skeletal frame upon which the player-driven construction of narrative can attach and mold itself.” I guess what I loved about the strategy and wargames I played is that for each conflict modelled I could imagine different military outcomes. I could build different skeletons. Sitting at a table in Northampton, Massachusetts, I could be the architect of different political realities in a region that mattered to me.

My love for event cards grew, and shortly after playing A Distant Plain, I stumbled across Churchill (2015). Before I get too far into the world of Churchill, I should highlight that its Board Game Geek profile warns that it “is NOT a wargame, but a political conflict of cooperation and competition,” although it did win the 2015 award for Golden Geek Best Wargame. Churchill is distinct from wargames in that it is played as a series of conferences. The rulebook explains that “during a conference you represent one of the Big Three—Churchill, Roosevelt, or Stalin—and your staff (seven staff cards each, per conference) where you nominate, advance, and debate issues.” Churchill, too, consists of event cards, and as in A Distant Plain, they gave me the chance to delve into narrative-building. Again, I pondered what events hadn’t made it into the deck. What episodes in history had Mark Herman left out?

Churchill: The Quote That Was Not His

Early August, as I continued with my own research on the U.S. military, I returned to this question of how we might break the history of Guantánamo down into individual episodes. If someone wanted to model Guantánamo, what 50 or 60 moments would make it into the deck? What episodes in the detention facility caused power to shift between detainees, journalists, guards, and lawyers? Tentatively I thought about what source material I might consult to get a comprehensive picture of what detainees, guards, lawyers, and journalists experience.

To get a better sense of what guards at GiTMO witness, I decided that I would do a full and exhaustive reading of @JTFGTMO—all the tweets that had been written for and by members of the military stationed in the segment of Guantánamo responsible for the oversight of detainees. And it was at this moment that Churchill unexpectedly reared his head:

Tweet initially posted on @JTFGTMO, archived on the Wayback Machine

You might chuckle at this quote. I know that I did. I read it out loud to my co-workers at the Harvard Law Library Innovation Lab. This is indeed the man who thought that Nazi leaders should be “shot to death … without reference to higher authority.” I got so psyched about this trace of Churchill that I started tweeting at @JTFGTMO, complimenting them on the motivational quotes. There were others—by Ralph Waldo Emerson, George W. Bush, and Rosalynn Carter, but they all seemed to fall flat in comparison.

Ultimately, the @JTFGTMO Twitter feed offered insight into individual moments of history at GiTMO that weren’t on my radar. But, later in August, something funny happened. Tweets began disappearing from the feed. They went from having 1097 tweets on August 2, 2016 to 901 on August 24, 2016, to 716 on September 7, 2016. Entire months gone—poof. Among the casualties of deleted tweets was my Churchill quote.

Frustrated, I did some digging. There’s another twist here. According to Churchill by Himself: The Definitive Collection of Quotations (2008), the quote can’t even be attributed to Churchill. He never said it. The takeaway: misinformation is a menace. There are still other lessons I learned during my excursion into @JTFGTMO.

I became so unnerved by this whole affair that I wrote the Joint Task Force—Guantanamo. I wanted to know what happened. Why did they delete the tweets? I hesitantly reached out to the Joint Task Force’s media team. Would they answer me honestly? By retweeting their tweets had I triggered the erasure of a military narrative that I sought to preserve? I received the following response from Joint Task Force Public Affairs Officer U.S. Navy Capt. John Filostrat: “The motivational tweets were removed because they had no relevance to JTF-GTMO operations.” I couldn’t help but chuckle. I wondered what Churchill would say about his deletion from the public record.

Photo of the wargame room, where the author collects maps and diagrams of GiTMO and its discontents

Today, my GiTMO wargame is not yet a prototype. I’m still figuring out what sorts of skeletons I’d want to let players build. I’m still tweaking, reflecting on repatriation and resettlement, pondering narratives, shuffling my cards, but at the very least I am starting to scratch at the surface of my inner Churchill.

It was Churchill, after all, who said in 1901 that “war is a game with a good deal of chance in it, and, from the little I have seen of it, I should say that nothing in war ever goes right except occasionally by accident.” I suppose the same could be said of love too.