From Uncle Tom’s Cabin to Bowling for Columbine, artists, filmmakers and creatives of all stripes have used their skills to impact change in the world. Game developers are also doing their part.

This is particularly apparent on the Games for Change website, which hosts a trove of titles from developers focused on social good.

Even among games where a player acts as editor-in-chief at a newspaper to sway public opinion in an Orwellian society or becomes a migrant hoping to evade border control authorities, Slam City Oracles stands out for its playful approach to self expression and the space we occupy in the world. 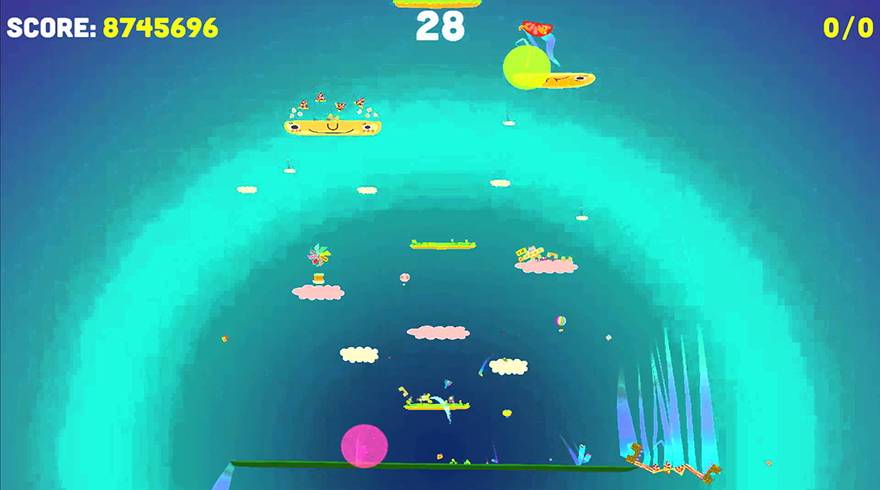 The whimsical, lighthearted smash ‘em up Slam City Oracles holds its own against the many other “serious games” seeking to educate players on poverty and global warming.

“I think it’s good to start casting the net of serious and personal games a lot wider, and to not be so focused on quantifiable outcomes,” said Jane Friedhoff, the game’s designer.

“I want to focus on the little ripples in culture that can have a kind of butterfly effect on the people who consume them.”

The girls make a big impact: Using various objects as trampolines, the girls launch themselves into higher and higher planes, before crashing down into hotdogs, Ferris wheels and many other Carnival goodies in their path.

A raucous riot grrrl soundtrack sets the tone and acts as a pulse-pumping two-minute timer for gameplay that feels aimed more at entertainment than education. Still, the game can be seen as a laugh-out-loud funny antithesis to many masculine power games.

Friedhoff’s game, originally commissioned for New York University’s 2014 No Quarter exhibition, is a mash-up of Katamari Damacy-inspired whimsy and mischief with a dash of girl power energy. The aesthetic recalls that of the spacey Hohokum, though it replaces tweeness with a fem-punk glamour.

But while Slam City Oracles’ Friedhoff didn’t set out to teach players a lesson, she has embraced a playful, staunchly feminist spirit that shines through in the gameplay itself.

“I want my games to feel like you’re a little kid and there’s a big pile of leaves daring you to dive in,” Friedhoff explained.

“I’m kind of an introvert, and I’m kind of quiet, so, for me, I always want to make spaces where I have an excuse to do these kinds of things.”

Though the player might only be conscious of the entertainment aspect, Friedhoff often stresses the importance of helping girls learn how to “take up more space” and be heard. She believes teaching feminist ideals and having fun are not mutually exclusive.

She believes teaching feminist ideals and having fun are not mutually exclusive.

In the game world, players exert almost total dominance over the space—there are no enemies, no ways to die, nothing to stop her from doing what she wants. It’s a common point of reference to think of mainstream video games as “male power fantasies,” and Slam City Oracles rejects that standard outright.

Embracing the physicality of a power fantasy, it flips the script on its head by offering a distinctly feminine experience. Slam City Oracles disrupts the order of things.

“What’s really nice about chaos is its disorienting nature, forcing you to be shaken out of your current perspective,” Friedhoff said.

“It’s like this voluptuous panic that gives you these modes of reflection. It’s a sort of magic. Chaos creates moments where the game world can blend into your real life.”

It’s not that Slam City Oracles hopes to suspend the player’s disbelief about the nature of reality. Instead, it helps people see beyond body standards in a joyous, unexpected and implicit way through play.

“For the most part people understand what Slam City Oracles is about right away, which is: to have a good, silly time with your friends,” Friedhoff said.

It helps people see beyond body standards in a joyous, unexpected and implicit way

“Players start laughing immediately, which is a really good sign to me. Laughter is a very honest reaction.”

While “games for change” can often translate into games that teach players important lessons through the game’s content, Slam City Oracles takes an alternate approach. It proves that sometimes simply being different and taking up space is progressive all on its own.