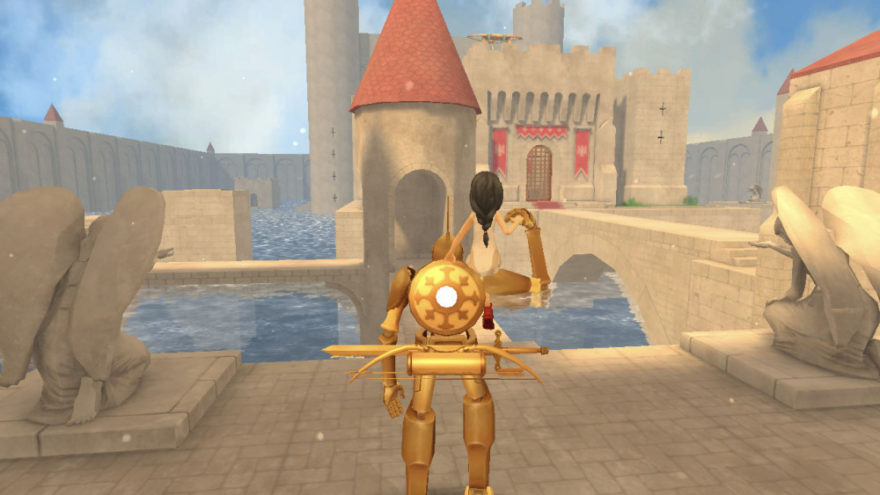 Title:
The Girl and the Robot

I feel like I’ve been playing this game all my life. I check the time—I’ve been trapped in this particular hell for probably two hours longer than necessary. And it’s all been on the same boss fight, running in seemingly endless circles as a small girl and her robot guardian. For a moment, I ponder the sweet quiet of death. Either mine, or the evil witch lady and her equally villainous robot friend that are pummeling me into the ground. Whatever comes first, really. For a game with its sights set on the solemn adventures of Ico (2001) and the heartwarming animated classics of Japanese studio Studio Ghibli, it sure feels devilish—which I’m positive is not its intent.

When I first laid eyes on the adorable concept art for The Girl and the Robot, I felt it had a zest to it. And at its start, the game does have its charms. You play as a golden robot (reminiscent of the ones in animator Hayao Miyazaki’s 1986 film Castle in the Sky), who often carries the playable heroine on its shoulders—a small raven-haired girl. It’s the robot’s job to protect and lead the girl to eventual safety from her former prison, gently holding her hand all the while. The game’s kingdom towers high like Rapunzel’s, sprawling far and wide. The nearby town is quaint and cute with whimsical decor, from storefronts to grassy graveyards, akin to Disney’s rendition of the small Italian village in Pinocchio (1940). For the first hour or so of the game, this folksy style is serene. It feels like you’re in an old-fashioned fairytale, aiding this young girl in her mysterious escape from unknown evils in this barren kingdom.

The lack of dialogue weathers its emotions in other sounds

The best fairytales are the ones where the heroine takes control of her own destiny. Or, at the very least, takes action to cement her own freedom, rather than all the glory being attributed to her male counterpart. Like in Disney’s Beauty and the Beast (1991), where Belle selflessly throws herself headfirst into danger to save her father. Or in any of Miyazaki’s works, which I personally see as modern fairytales of sorts, where the female protagonist at the helm overcomes any challenges thrown her way. Girls like San in Princess Mononoke (1997), who fights tooth and nail alongside her surrogate wolf family to protect the forested nature she calls home. Or like princess Nausicaä in Nausicaä of the Valley of the Wind (1985), whose heroic efforts save an entire species. While the young protagonist of The Girl and the Robot doesn’t fight her enemies—she’s just a child—she’s not entirely useless, at least in the beginning. She helps her robot pal in puzzles, and the robot protects her in ways she can’t protect herself in return. But unfortunately, this duality is short-lived.

Ico, the beloved Fumito Ueda-directed adventure game, observes the gentle relationship shared between the titular hero and Yorda—the girl he escorts over the course of the game. It shares a lot of similarities to The Girl and the Robot. Both relationships in the games build without any dialogue, evolving only through quiet action. Ico is Yorda’s protector, just as the robot is the guardian of the girl. Vocal sounds in The Girl and the Robot are resigned to shocked gasps and the occasional scream upon a Game Over, just as Ico’s lack of dialogue weathers its emotions in other sounds. The relationships at their centers aren’t empty or unexplored without the crutch of words. They blossom from a natural place—from working together to endure and survive.

If only the gameplay matched this proven relationship dynamic. When the game’s once-bright architecture desaturates into grayish, beige stone walls around the third-of-the-way point, The Girl and the Robot takes a turn for the worse. Suddenly, it’s a question of what enemies are spawning in and how many times will I have to die to surpass them, rather than what puzzle I am going to work to solve next. In a stark contrast to its once muted beginnings, The Girl and the Robot becomes about the action: loud and chaotic, rather than a somber fairytale.

The game’s graceless combat was once tolerable. But as the game progressed, that fact faded into a distant memory. It became a common occurrence to find myself frantically flinging arrows at the speedier robots sprinting my way, while praying that the slower, stronger ones didn’t reach me in time for more tedious hack-and-slashing. Given the game’s inherent tank-like controls, high-intensity combat with more than two enemies at once doesn’t hold up. It falls apart under pressure, as I’m stalled with every hit and am jousted by spears again and again until I malfunction. Before I knew it, I had quickly abandoned any of the zeal that I felt from the game’s opening portions. I found myself abhorring my time with it, just wishing it would end.

The boss fight I’m trapped in is one of only two in the game. As the girl, I’m high above the arena below. I sprint in circles around thin platforms, trying desperately to lead the evil witch chasing me in front of a cannon. After firing it, I switch to the robot below, where it has a brief opportunity to make three perfectly-timed slashes at the nega-version of itself, after which it fires an arrow to rotate the cannon to a new direction. I have to repeat this four times, and the witch quickens her pace with each go around. Ugh.

A beast unlike its intended making; a truly broken nightmare

In one of my many attempts, the witch herself, shuffling crazily fast towards me, fell off the platform. The game stuttered, and I realized something awful: she had respawned right next to me. And there she was, cackling with her giant staff in hand as the small girl screamed in terror. Time to restart. Again. For a game whose controls are cumbersome (and sometimes unresponsive), coupled with a camera that doesn’t quite want to spin round to keep an eye on the witch that’s on my tail, this boss finds itself transformed into something worse than it already is. It’s a beast unlike its intended making; a truly broken nightmare. I ponder how a game that began so delightfully, from such an innocent, reticent place, somehow devolved into this seemingly inescapable hell.

Fairytales have drama. They have problems, too. There are epic battles and evil forces. But there’s also an inherent quality of childlike wonder, and a feeling that everything is going to turn out okay. There is necessary magic and glee among all the gloom. In the end, there’s a happy ending, or at least a conclusive one. The Girl and the Robot doesn’t have this. It abandons its wish to weave a charming fairytale all of its own, and tosses in poor combat alongside too many enemies for the player to enjoyably manage. What could be a fun or worthwhile challenge deteriorates into an annoying mess, cluttering the narrative and making the game seem to be about something else entirely: just fighting robots.

As I stood before the game’s final castle, with the girl calmly resting on the robot’s shoulders, I reflected on my experience. What happened to the adorable concept of a girl and her robot companion, bonding over their journey? What happened to the simple puzzles and minor, manageable enemy encounters that started within this fairytale world? Why was that one particular boss encounter so terribly designed? I won’t remember my time with The Girl and the Robot feeling like a magical fairytale. I’ll recall it being a poorly designed, stressful videogame. And that’s a shame, because that initial art sure was cute.