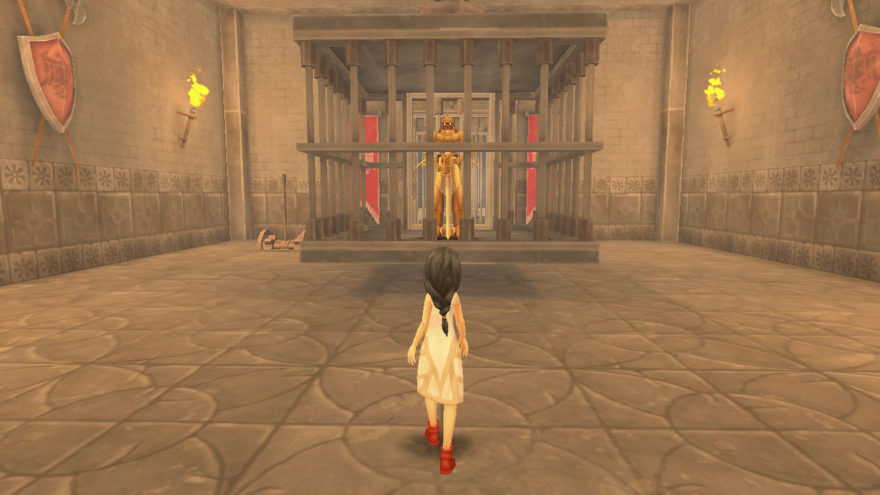 Ever since The Girl and the Robot’s interactive fairy tale first showed up on Kickstarter, it stood out amid a sea of games about shooting stuff as an earnest attempt to be sweet. Take a look at the protagonists or the old Europe inspired castle they wander around in, or listen to a clip of the recently-released soundtrack, and it’s clear that Flying Carpets Games isn’t so much going for the Brothers Grimm appeal as it is their defanged, happy-ending younger cousins.

Obviously, The Girl and the Robot does take inspiration from the classics, which is evident after a quick look at the trailer and screenshots. The walls and buildings are a simple yellow, accented occasionally with oranges and greens that don’t make it look any less like a children’s book. The girl, too, looks like she walked out of a fantasy novel. It’s the robot—a clunky but charming suit of armor that I’m pretty sure I saw in Harry Potter—that causes you to double-take, but then again… after a glance at the trailer and your big metal friend in action, that makes sense, too.


The creators of The Girl and the Robot cited The Legend of Zelda: Ocarina of Time (1998) and Ico (2001) as inspirations in their Kickstarter, as well as the sweet, atmospheric films of Studio Ghibli. It’s not hard to see where those fit in: the Queen’s concept art gives off serious Zelda vibes, and you could easily see the girl and her robot fitting into the iconic My Neighbor Totoro (1988) bus stop poster.

But the game’s makers are taking a chance here too, especially when introducing the character switch mechanic that allows you to control both the girl and her robot in turn, crawling through inaccessible spaces with the girl and fighting monsters with the robot. It’s not the first game to try such a thing—Thomas Was Alone (2012) comes to mind, as do most LEGO games—but for the most part, the opportunity for complex puzzles and non-routine exploration has been underused. Hopefully The Girl and the Robot will take advantage of this, because what we’ve seen so far of the castle looks too lovely to only be walked through.

Good news though: we’ll find out how it all adds up very, very soon. Almost three years after their Kickstarter first launched, The Girl and the Robot’s release has been confirmed for August 18th. Their Steam page is already online, so all you have to do is stay patient and see for yourself.