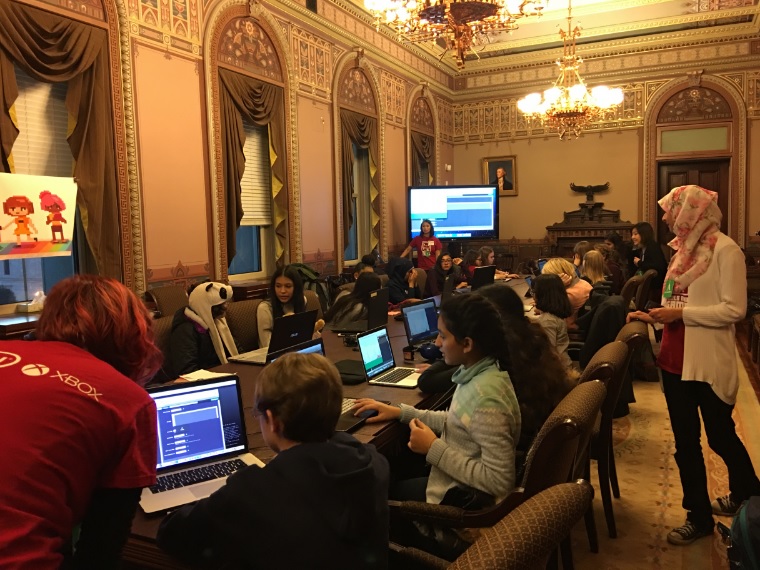 Where do you go after teaching girls how to code and make games with workshops, summer camps, and game jams across 38 cities worldwide? The White House, apparently.

Last week, on December 7th, Girls Make Games ran a two-hour workshop inside the White House with a bunch of girls from ages 11 to 14. (Which, as has been mentioned to me, is something that might not happen again for a while given the change of administration at the White House next year.) There were interactive lectures and time for some hands-on coding too, which each girl given a playable prototype at the end of the workshop, along with a certificate and the resources required to continue coding their game. We have some photos of the workshop in session below.

Izzy Penston, the lead writer and creative director for Interfectorem, sharing her experience writing and designing the game. Interfectorem was the winner of the 2015 national Demo Day competition hosted by Girls Make Games, in which teams pitch their games to industry experts. The grand prize is having continued mentorship while working on the game and having it published when it’s finished.

Jordan Levine, one of the workshop participants, holding a box of Hershey’s Kisses carrying the Presidential Seal

The workshop was part of the Computer Science For All initiative that has been ongoing since President Obama launched it back in January 2016. During his weekly address at that time, Obama said “we have to make sure all our kids are equipped for the jobs of the future – which means not just being able to work with computers, but developing the analytical and coding skills to power our innovation economy.”

As part of this “year in action” in support of the initiative, 14 states have expanded their computer science programs, 500 organizations have taken place with new programs and funding, and a new AP-CS course launched in the fall across 2,000 classrooms. Girls Make Games is one of the participating organizations and will be making its game development workshop curriculum available online for free in 2017 as part of that. It will also be distributing workshop-in-a-box kits to school districts around the US, which includes teacher training modules, art asset packs, a game building curriculum, and a mobile publishing resource.

You can find out more about Girls Make Games on its website.

All photos taken by and provided by Girls Make Games.