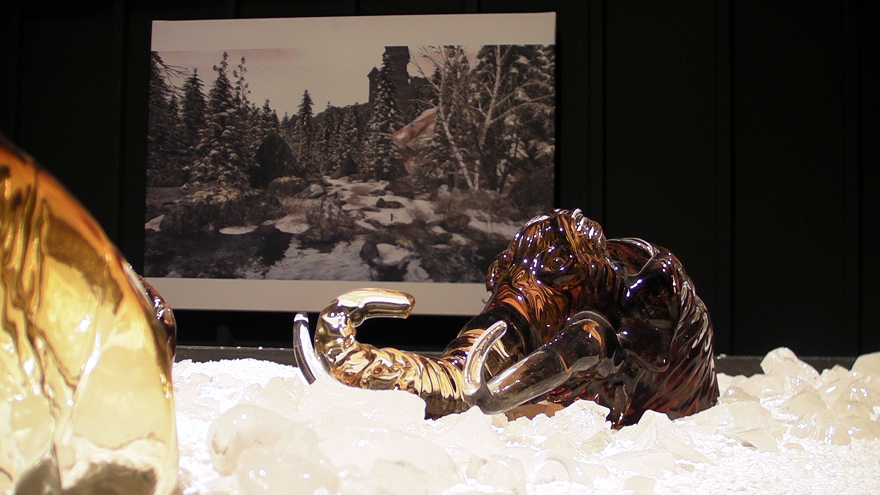 From the very beginning, each successive step in the Syberia videogame series took players into a world that was more and more different from their own. American lawyer Kate Walker begins the first game abroad in France to put the finishing touches on a new acquisition. By the end of Syberia II, she’s reached the titular land and discovered the gargantuan mammoths who still inhabit it.

A new exhibit running through this November will showcase this evolution by combining augmented reality with glass sculpture. Glasstress 2015 Gotika, a part of the 56th International Venice Biennale, is a joint project between the Hermitage Museum in St Petersburg, Russia and the Studio Berengo in Italy. As the name suggests, the exhibit’s aim is to explore the ongoing influence of the Gothic aesthetic. More specifically, the show sets out to “explore how medieval ideas and communication methods have imperceptibly crept into our modern conscience despite our technological advances and how the Gothic concept influences contemporary art.”

The Syberia portion in particular mixes Syberia series’ writer Benoît Sokal’s vision with the artistry of a Murano Master glassmaker to help give shape to the future gothic sensibility that pervades the game’s world. Working as a sort of conceptual bridge between the organic looking glass mammoths and the digital universe they hail from, an AR app will place protagonist Kate Walker in the space between the show and settings from the upcoming Syberia 3.

The first two games dealt with the dream inspired in the child-like Hans to see and ride the mysterious mammoths of Syberia. That fantastical project, and the ending scene from Syberia II in which it’s finally realized, served as motivating contrast with the rest of the world and its muted color palette. The glass mammoths created for the exhibit beautifully capture this aspect of the games. Ancient and regal like the gothic monastery from the second game, but welcoming, magical even, compared to the people and puzzles encountered in the former.