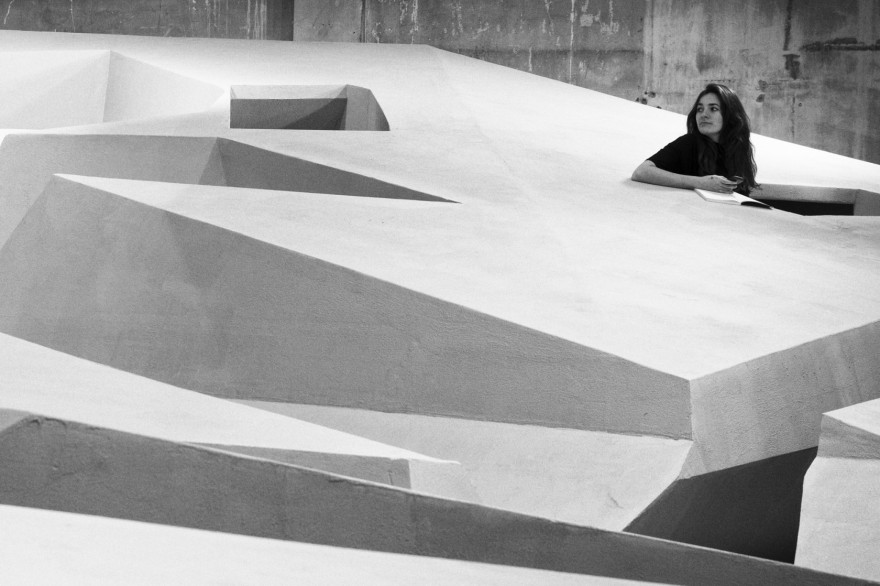 This sprawling polygonal blot is the work of the architecture firm RAAAF and the visual artist Barbara Visser, and, while it sort of looks like a laser-tag course or the Aggro Crag or something, it is in fact a vision of a healthier, happier future. We all know that sitting down all day is unhealthy—“worse than smoking,” we hear; leads rather directly to obesity, cancer, and heart disease—but the issue remains that making the switch to standing all day, for people who are able to, still isn’t easy. We have decades of office construction built around the seated desk, and breaking out of that costs money, not to mention the willingness to loom over all of your coworkers like some sort of productivity centaur.

Hence: this mountain, which the involved parties have dubbed The End of Sitting. Its long angles and crannies provide places to stand, lean, recline, congregate, loll, etc.—all without taking the proverbial load off. I’ve used a standing desk for a few years, often constructed on upside-down garbage cans and weird slats of wood that I find, and I can say that there is a certain energy that carries through the day, not to mention a rewarding fatigue toward the end of the day. So your dogs, they will be a-barking after a day on this playground, but, if the pictures are to be believed, you will also be a lithe, handsome Dutch person, so it’ll all be worth it.

The obvious question is: should we be worried about this when playing games? Motion controls and live-action roleplay are much more three-dimensional, but the fact remains that the vast majority of digital and tabletop game-playing involves sitting still for a really long period of time. (All three people who I spent a Sunday playing Mage Knight with a few weeks ago had a sore back by the end of it.) But the notion of standing around while holding a traditional controller just seems ungodly, like I somehow lost a bet. Point being: I’d like to see some of the creativity on display in The End of Sitting applied toward where we sit everywhere—not just at work, but at play.

The End of Sitting is on display for three more days at Looiersgracht 60 in Amsterdam.