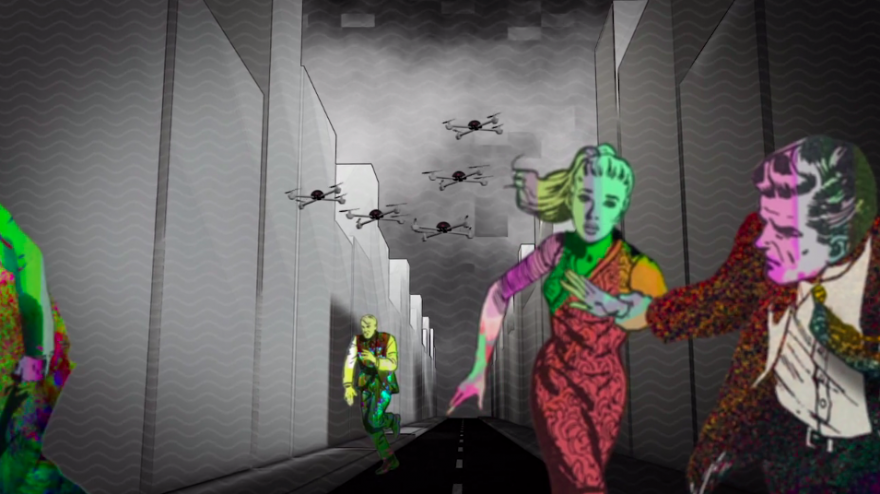 The Candidate, director Michael Ritchie’s 1972 political satire, depicted an exaggerated political milieu in which even the most earnest of candidates is shallow and ultimately believes in nothing more than getting elected. Ritchie’s exaggerated world, in other words, is the world we now live in. Therein lies the risk and perverse beauty of genre cinema: sometimes a filmmaker’s transgressive vision becomes our everyday reality.

Writer, director, and animator Cody Healey-Conelly’s Glitch Noir is a genre short whose dystopian future may imminently be upon us. It is about streams of information and the use of drones. More specifically, a major company’s drone fleet has started to malfunction and poses a threat to the populace. Deaths occur. To nobody’s surprise, the responsible corporation cares less than it should and experiences less suffering for its sins than it probably should.

That last sentence is probably a spoiler, but how can one spoil the present day? Glitch Noir’s bleak future is so close to the present that its conclusions are largely knowable from the start. Sure, this future is couched in a mix of film noir graphics, Roy Lichtenstein pop-art, and glitchy web graphics, but its IRL equivalent is readily apparent. (Gee, can you think of a company with a forthcoming drone fleet that could never possibly ever, ever malfunction? Why on earth would you ask that question?)

The IRL equivalent is readily apparent.

Glitch Noir arrives at a time when the corporate and digital malfeasance is an important cultural theme. Last week, Mr Robot finished its ten episode first season run on USA. Its finale highlighted the high costs of corporate plans gone awry, but also hinted at the possibility that large corporations tend to come out on top in the end. Glitch Noir takes this conclusion and runs with it. (In another Mr Robot parallel, Glitch Noir’s villain is named Tyrell. Please feel free to send your theories about Mr Robot’s Tyrell Wellick to Kill Screen.) None of these works appear as speculative as The Candidate, but in the digital age of genre storytelling, we no longer have time speculate.