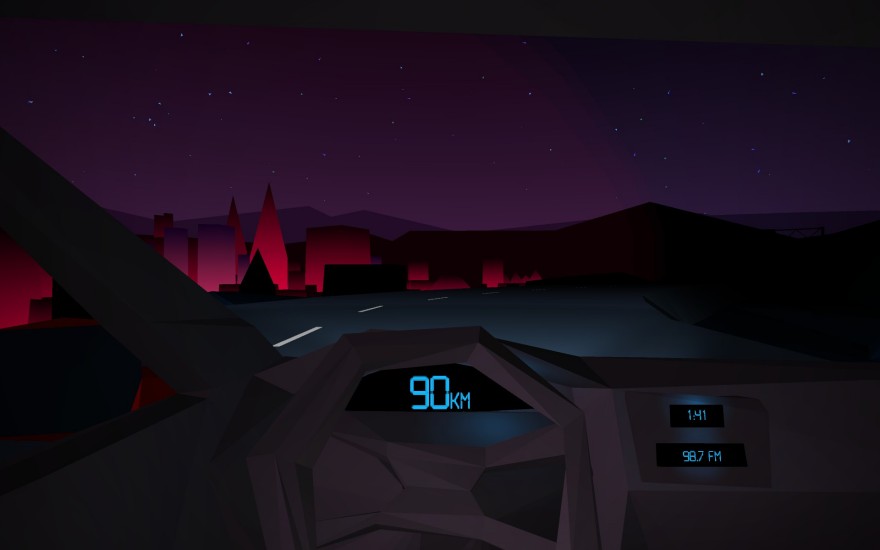 “I’ve never picked up a hitchhiker before.”

Glitchhikers is unlike any other driving game out there, coasting along a forsaken and empty road in the same way its characters are. The art direction, musical choices, and strange atmospherics all help relay the feeling that you’re navigating a road rarely traversed in videogames, but the most noticeable thing about the whole experience is how little operating a motor vehicle actually matters in it.

In some ways, it seems to set out to invert the racing game. The first thing you learn upon starting your journey is how to accelerate and slow down, how to change lanes and look either right or left in order to scope out your immediate environment.

Then you drive along; or, rather, you coast. Increase your speed—or not. Even pressing nothing will see your vehicle chug by at a steady 100 km/hr. You don’t steer, but you can change lanes if your heart desires. Sometimes you see taillights off in the distance, but no matter how fast you chase, how often you zig and zag, or how long you press the accelerator, the result is the same: You will never pass a single car.

Instead, Glitchhikers takes the driving game we all know and places the focus almost exclusively on what’s happening within the car: lots of staring, listening, and thinking, with a dash of occasional talking. The driving is important only insofar as you need to know how to function within the game’s world. After awhile, you almost forget about those buttons, much as you forget about a car itself during a long drive. It’s your vehicle for movement, sure, physically transporting you from one space to another, but all of the real action is taking place elsewhere.

As the drive continues, railings and trees pass by in a purple haze, and you think you spot a glimpse of someone or something on the side of the road. You look to the right. All of a sudden, your passenger seat is occupied.

“Why are you driving?”

She’s smoking a joint, and I don’t know her name. Why am I driving, though? Is it a spiritual thing? Am I looking for something? Hell, considering I don’t even have to hit the gas to keep this car moving, I may not have a good answer to the question, and the game isn’t really offering any satisfactory options.

It’s strange, but as the conversation moves forward and I hear about her troubled family life, I start to feel like I’m sharing a real moment with a real person. I want to say something to her that doesn’t sound contrived or ham-fisted, but when it comes to actually making conversation, Glitchhikers is very blunt, often in ways that don’t come across as very natural. For a game focused almost entirely on speech, it’s disappointing.

Yet the manner in which these discussions unfold is accurate in one very important way: Sometimes it’s just easier to talk to strangers about important topics—suicide, religion, metaphysics—than it is to have the same conversation with a family member or very good friend. The barriers that keep you from sharing can often melt away when you know you don’t really know someone, that there is far fewer context to be judged within. I was surprised at the way I began offering honest, private thoughts to these digital hitchhikers, throwing them up as quickly as the mind scatters during a real drive down a dimly lit road.

In an interview with Pixels or Death, Glitchhikers writer Lucas J.W. Johnson said his goal was to create “a liminal space” in which each player could “self-reflect or consider a theme.” Considering the subject matter involved, it would be easy to dismiss or mock those who seem a little too earnestly straightforward, but it’s that lack of irony that ultimately helps Glitchhikers worm its way into your mind.

What then, though? While it’s obvious that Glitchhikers isn’t about rewarding you for making a physics-defining turn or clearing checkpoints, less obvious is exactly what the player should take away from it. Each hitchhiker quizzes you on various beliefs and then disappears without a trace. The game is just 15 or 20 minutes long, leaving behind only whatever synapses have been fired off in your brain and whatever desire you have to continue thinking about the issues you just encountered.

It’s a vehicle for questions.

By the time the credits started to roll, it was clear that Glitchhikers isn’t looking to give answers, be they about the universe or anything else. It’s a vehicle for questions, one that can focus the mind but leaves the dirty work for players to unravel themselves. The same way that a lonely drive can be mentally stimulating yet inconclusive, Glitchhikers is a meditative and moody experience that nudges you to consider obstacles more substantial than those present in a cutthroat racing title. Players will be short on epiphanies even if they become fully drawn into what’s happening, but chances are they won’t be short on thoughts. That’s worth buckling up for.