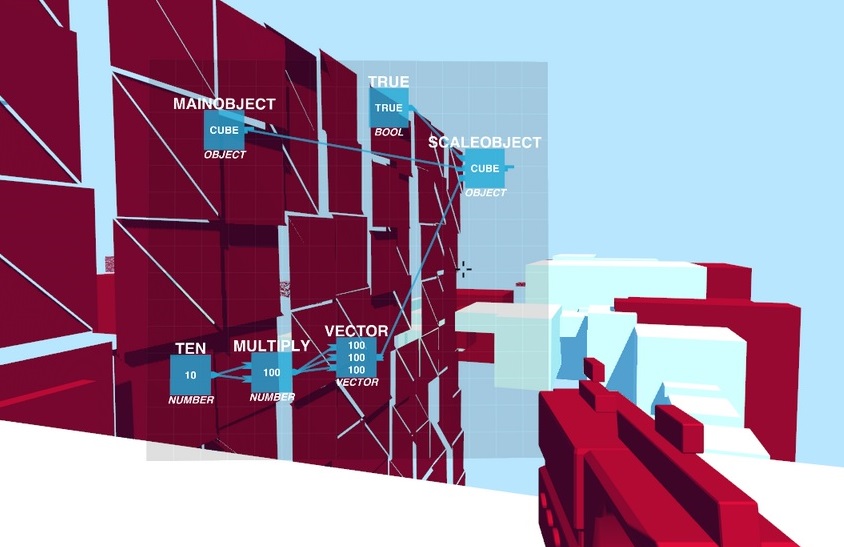 Videogame worlds often consist of natural and constructed landmarks fashioned to guide you. They’re abstract, simulacra. Just think about perpendicular carvings in a mountainside acting as steps, or neatly stacked crates sitting underneath an open vent. The world is chiselled to fit the capabilities of your virtual body so that you can understand how to traverse it by mere sight or, sometimes, experimentation.

That’s not quite the case in Glitchspace.

In this first-person platformer, the challenge isn’t found in making gasp-inducing leaps like you made in Uncharted and Mirror’s Edge. No, it’s about repurposing the environment to make it safe and manageable.

The red glitch blocks aren’t formed to serve you. They’re unfinished, or possibly corrupt, pulsing and fragmenting uncontrollably. You’re armed with a programming gun that brings up a drag-and-drop interface of commands, objects, and functions. These are the tools you use to manipulate the glitch blocks.

repurposing the environment to make it safe and manageable.

A red rectangle lies across a chasm between two platforms. You hack into the rectangle, select “Numbers” and “Ten” from the options on the right, then drag the “Ten” command into “Vector” in order to stretch out the rectangle’s Z-axis. Now you have a functioning bridge to stroll across triumphantly.

The curvy grin you wear after this novice’s challenge may turn into a circular gawp if you make the same mistake that I did afterwards. I took a red glitch block for granted, went to jump on it but tumbled into a hole, where the only way out was to reprogram another block to bounce me out. The blocks I’d used to cross gaps before had fooled me by not being solid this time around.

This moment has come to define Glitchspace for me; it ignited my perception of it as an analogy for how some disabled people have to learn new hazards in familiar places, and customize their surroundings to navigate them.

Following this up, I asked writer and game developer, Ashton Raze, for his thoughts. Ashton has a spine condition that causes him a great deal of pain and can make it very hard to walk. He recently read Octodad: Dadliest Catch as an analogy for invisible illnesses, drawing from his own experiences.

As for Glitchspace, he provided an anecdote that matches how the game plays out:

“When I came home after my first surgery, it was like being in a different place, even though it was visually familiar. That cupboard or edge that was just an edge before was now a point of respite, somewhere to lean on. So you gradually, subconsciously, make changes to your environment.”

Glitchspace is a platformer about exactly that—changing your environment to fit your needs. You don’t overcome great odds by performing physical feats. You simply make adjustments to the designated paths. You make them safe.

It got me thinking: As VR technology advances, when will we be able to hack into real spaces to alter them to our needs?

Glitchspace has a browser demo and its alpha can be purchased here.