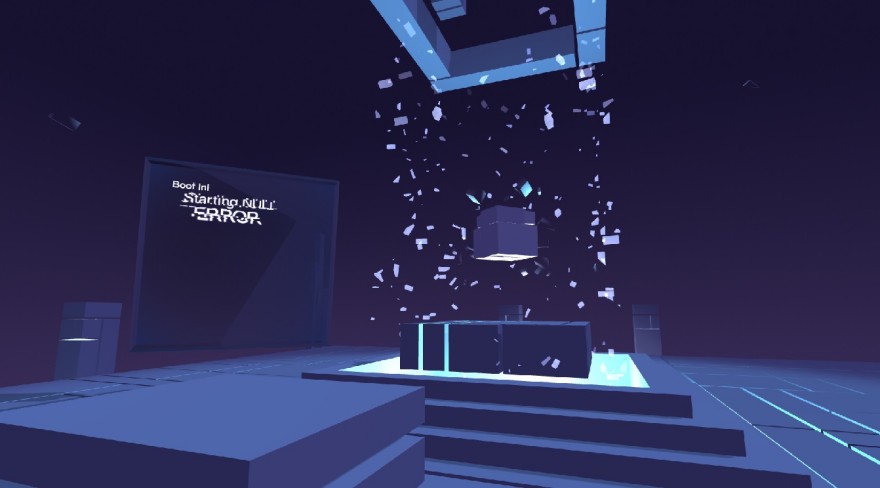 Using a programming gun to solve environmental puzzles is one of those ideas that works great in theory more than it does in practice. That’s what Space Budgie discovered upon releasing the first alpha build of Glitchspace last year, at least.

Yes, despite the positive reception from early critics and fellow game developers, Glitchspace proved to be polarizing among the first batch of players. “Some were on board straight away with the developed programming mechanic, whilst others were left confused and alienated by a title that felt completely closed off to them,” Space Budgie said.

it layers each programming idea on you

It makes sense that this would be the case. This is, after all, a videogame that has you dragging and dropping actual (if simplified) code. Not too many people are familiar with doing that. And it seems that what Space Budgie didn’t manage to do was ease those who are completely unfamiliar with coding into all the lingo and mathematics that it requires you to understand. I didn’t have a problem with it myself, but I’m aware that that’s due to my time spent fiddling around with basic programming in Unity—any actual programmer should whip through the game without a hitch.

Having realized this error, Space Budgie has spent the entirety of 2015 so far creating what it calls alpha 2.0, which was made public yesterday. What it represents is a complete overhaul of Glitchspace‘s introduction. It doesn’t assume that you know what to do with vectors and ‘if’ statements right off the bat. Instead, it layers each programming idea on you, letting you test it out in a safe space first and then in a more dangerous scenario afterwards.

It’s game design 101 but, hey, it works and it means that Glitchspace picks up its momentum much quicker. In the hour that it took me to get through alpha 2.0 I went from basic programming tasks such as making platforms solid so I could walk on them across a gap, to tweaking complicated sums so that a platform launched me hundreds of meters into the air to land elegantly inside a fractured cathedral.

And that’s another thing that’s changed: the architecture. The first builds of Glitchspace only had flat-looking blocks populating a sparse topography. Now it feels like you’re navigating the frozen aftermath of an explosion that has sent whole pieces of carved masonry into the air. Windows cast criss-crossing shadows across the floor, stacked staircases lead up to inviting portal gates, and the floating platforms you ride could be part of a robotic assembly line. You get a sense that the fragmentation of the game’s glitch theme extends beyond its puzzle mechanics and further into the world itself, which you may or may not be piecing back together.

To achieve this, Space Budgie says that it has taken from the classic abstract artworks of Mondrian. It’s hidden like a ghost, but you can see faint traces of Mondrian—and more specifically neoplasticism—in the walls that are patterned with grids of black lines, as well as the selective use of color across all the structures. It helps that the geometry you can reprogram is colored strictly in a bold red while everything else belongs to the glowing tones of cyberspace too. Here, Mondrian’s reduction of form and color to simple shapes is used aesthetically and practically so that it’s clear what you can interact with to move forward.

The finale of alpha 2.0 goes beyond this. It manages to build in a verticality that steadily creeps up on you. As you leap further upwards using the launch platforms you reprogram, the arches and staggered brickwork of Gothic towers is drawn in, implying a greater theme of celestial height. Until, eventually, you reach the top, where staircases cannot go, and have to fall all the way back down through a transparent pipe, noticing the gradual shift from sunshine to purple darkness.

The biggest difference between the different alpha builds is a sense of story (appropriately, considering it now has a Story Mode). It’s found in the how the architecture evolves as you climb and descend. But also on a more basic level as you warp between each separate area, learning a new programming trick—and properly learning it this time—building a toolset that you can tell is leading you towards some greater task.

You can purchase Glitchspace from the shop links on its website.