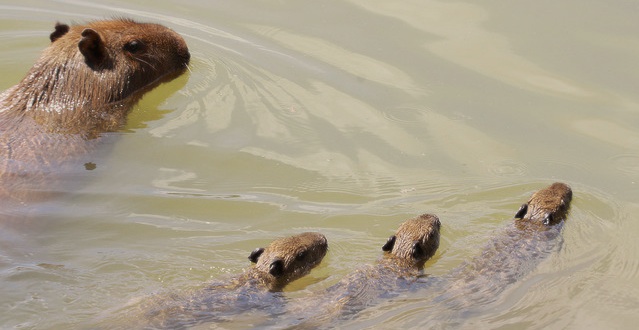 
We love games of all shapes and sizes, and guess what? So does the rest the world. This is part of a larger project to document a homegrown game from every country in the world.

The rules of this game are remarkably similar to our first Global Game Project entry, Zambia, but the flavor surrounding those rules—the song, the animal, the item used—are all completely different. Such similarity exemplifies the need to play that exists within all young people. The rules—a variation on Duck, Duck, Goose—must be fun and simple enough to appeal to diverse cultures on at least two different continents. The small details, although irrelevant to the rules, must have been adapted intentionally or gradually mutated to better fit the reference points of different children.

The cutia (agouti in English) is a South American rodent that usually flees from human contact. It communicates mostly through sound and smell, which may explain its inclusion in the game, but as with a lot of wordplay aimed at children, it could easily be because its name suits the rhyme and rhythm of the song.

Livia, Brazilian living in London, explained the rules to a game that seems to have travelled well.

1. Children sit in a circle, facing the center with their eyes closed.

2. One child (the cutia) runs around the circle with the handkerchief, as they all sing the following song:

3.  At the end of the song, the cutia drops the handkerchief behind one child’s back.

4. The children in the circle open their eyes and look behind them.

5. The child with the handkerchief behind their back picks it up and chases the cutia, who must sit in the empty space without being caught. If they do, the chaser becomes the cutia.