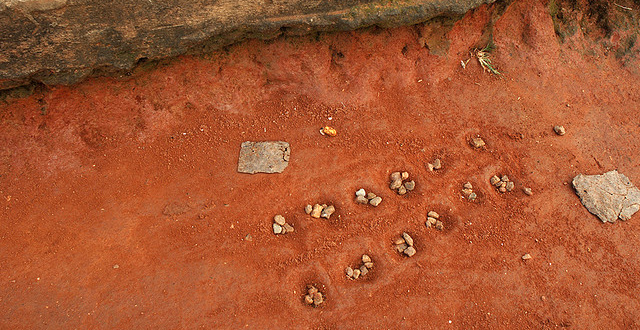 We love games of all shapes and sizes, and guess what? So does the rest of the world. This is part of a larger project to document a homegrown game from every country in the world.

Perhaps as an elementary schooler you were introduced to a Mancala board. It’s long and narrow, often made of smoothed wood, with a series of pits dug in two rows. Seeds, stones, or marbles act as the playing pieces, jumping from “house” to “house” in the various basins.

There are popular adaptations among hundreds of localized variations across Africa, Asia, and elsewhere, but there is no “standard” Mancala game.

A Malaysian offshoot is called Congkak. It’s played throughout parts of Southeast Asia, traditionally by girls, and like many other Mancala games, involves obtaining more playing pieces in your home pit than your opponent’s.

Interestingly, in the Malaysian state of Terengganu, this traditional offshoot has its own more obscure variation, Congkak Gergasi Wanita, in which the pits are houses and players carry playing pieces in baskets. It means “Women’s Giant Congkak.”

Disclaimer: The only rules we could find for this game are very vague.

1. Divide players into two teams of eight, each led by an ibu, or mother. Set houses as corresponding to each team.

2. Ibu of each team instructs players to bring a ball to a chosen house. Players place the ball in a basket, then bring it to a waiting player in the designated house.

3. Players are repeatedly cycled throughout the houses according to instructions, exchanging and collecting balls. If a ball arrives in an empty house, it is forfeited to the opposing team.

4. Object of the game is to gather more balls than the opposing team within a time limit.  ?