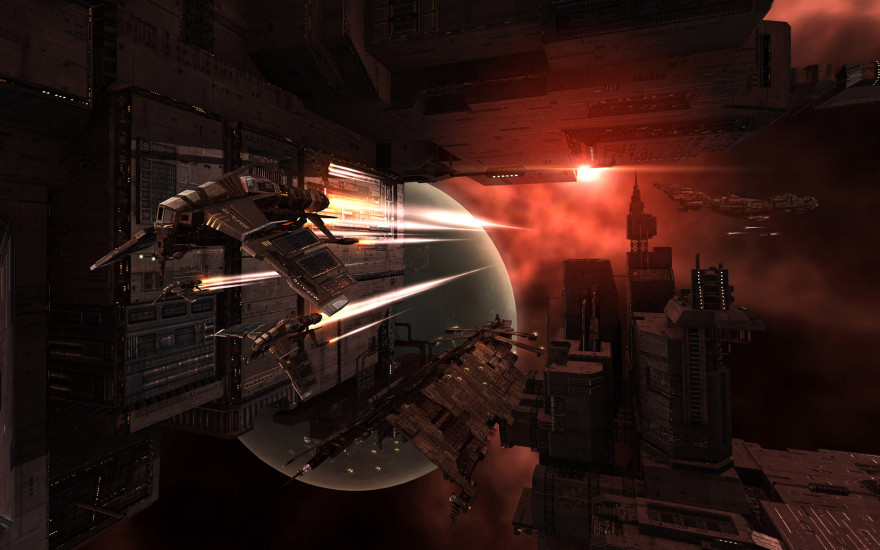 Over at The Mittani, Alikchi has put together a fascinating article on the propaganda of Eve. It turns out intergalactic war among space fleets on MMO servers is not altogether different from the wars fought in real life on planet Earth. Both rely on vainglorious messages to recruit, rally the troops, and placate other nations. Both fudge the truth.

these updates encapsulate a ‘worldview’ of New Eden that may or may not be at odds with reality. GoonSwarm might not be the Reavers of New Eden. Makalu might not be a terrible FC. SOLAR allies might not all be “pets”. None of these sentiments will be expressed in propagandistic updates, whether they’re true or not. Intricacy is inconvenient for the authors of these works.

But there are some differences. Because Eve is an online game, and because Eve players are multitalented, the propaganda not only takes the form of traditional agitprop like cartoons and war posters, but also memes, GIF, online manifestos, and amazingly well-choreographed YouTube videos. The importance of these persuasive tactics cannot be understated. An alliance’s top resource is players, and an alliance with a reputation for cunning and victory is the one committed players are likely to join.

Yet Eve’s propaganda isn’t strictly utilitarian. History is written by the victors, and though propaganda isn’t always factual, it documents the mentality of the players, which for a game is probably superior to a record of who did what.

Propaganda is also a part of establishing a narrative for your alliance and building cohesion between what usually begins as a disparate band of corporations. Long-lived, successful alliances tend to have a strong narrative and good propaganda. Witness RAZOR’s five years of magnificent propaganda posters—they convey information, establish culture, look great, and they’re hilarious to boot. Perfect.

You will occasionally here about the difficulty of preserving MMOs, because they are worlds. Without players in them, they don’t exist. But on a larger scale, you could say the same about any game. A few hundred years from now, will people actually get what it was so great about playing Atari — to lay on the carpet with a friend and plastic gadget a few feet from the TV. Would my niece? I doubt it.

But the propaganda of Eve captures something that would otherwise be lost. Maybe propaganda isn’t necessarily a bad thing.