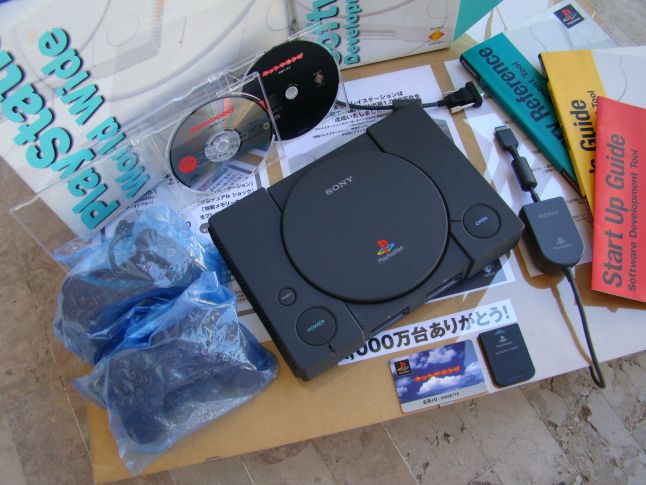 The Net Yaroze’s importance is probably hard to grasp from the mountain tops we sit upon today. These days we see people bemoan the saturation of small, amateur, and otherwise non-blockbuster games on digital markets. The so-called “indie bubble” is about to burst, they say, in a manner fitting of Chicken Licken’s cry of “The sky is falling!” Back in the Net Yaroze’s day, the opposite was the issue to be tackled: making videogame development more accessible, establishing a community of creators, and getting hobbyist games in front of people who wanted to play them.

Sony was trying to foster a bed of creative talent

The Net Yaroze was a $750 development kit released in 1997 that allowed anyone who could afford it and who could be bothered to learn the C programming language to make games for Sony’s PlayStation. Its significance is its tie-in with a major gaming console. Hobbyist game-makers existed before the Net Yaroze, sure, but they were mostly confined to non-gaming focused PCs like the Amiga 500 and Commodore 64. The exception is the Atari 2600 which, somewhat notoriously, is a home console that was flooded with amateur games.

On paper, the major difference between the Net Yaroze and the Atari 2600 are the figures. Atari’s console has sold 30 million units as of 2004 whereas the original PlayStation (not including the PSOne model released in 2000) has sold about 74 million units. If you want more figures to compare these to then the Commodore 64 probably sold about 12.5 million units (it’s a debatable figure) and the Amiga 500 sold between four to six million units.

Unfortunately, for those making games with the Net Yaroze, reaching those millions of people turned out to be a lot of hassle, if not impossible. The problem was that these creators weren’t able to burn their games to disc so they could be distributed. This seems to have been Sony’s effort to avoid a repeat of the Atari 2600 and have its console’s reputation brought down due to being rammed with unchecked and low-quality games.

This is one of the topics discussed by those that once made games with the Net Yaroze in Gamasutra‘s oral history of the development kit. “The lack of distribution channels was a very real limitation to the Net Yaroze, and is probably what led to its eventual demise,” says James Shaughnessy, creator of the Net Yaroze-made Gravitation. The whole article gives rare insight into the behind-the-scenes workings of the Net Yaroze and how Sony was trying to foster a bed of creative talent around its first gaming console.

There are plenty of shortcomings on Sony’s part to discuss but also many freedoms to celebrate that sowed the seeds of some peoples’ careers. Those that bought a Net Yaroze were given dedicated online spaces—private forums and individual webpages—where they could blog about their process and share games with each other. It provided a valuable source of feedback that they weren’t able to get from players until many years later when they discovered small cultish online followings of their games had arisen.

But in retrospect that internal feedback loop could have been expanded further had Sony not divided the communities by region. Those in Europe, America, and Japan were forced to keep within those continental circles which, while allowing for tighter-knit groups, meant that the swapping of ideas was limited. And unlike the game development tools and engines available now, the Net Yaroze wasn’t particularly user-friendly, and so, as the article notes, “the sharing of tools and knowledge was pivotal to getting a full game finished.” Who knows what could have been made back then had the separate communities been united to see each other’s games and processes?

“There was lots of banter and camaraderie.”

Also interesting is how other formalities of the Net Yaroze proved divisive. Some of the hobbyists thought that $750 was too expensive while others saw it as their motivation to not make waste of their money. Likewise, the hardware limitations proved to be a pain as big ideas had to fit into a tiny 1.5MB of free memory. But others saw these limitations as forcing out their creativity, to experiment, and to see how far they could push themselves within these squashed hardware specifications.

It’s also uplifting to read lines like this from Shaughnessy: “There was lots of banter and camaraderie. People would always take the time to help you if you asked how you might go about implementing something, or for help with bugs or with graphics or audio, and give feedback on the games you made.”

For people like myself, whose first taste of the different flavors that videogames can offer came from playing those made with the Net Yaroze, this is heartwarming. I remember getting excited every time my dad returned from the shop with a copy of the Official PlayStation Magazine. It always came with a demo disc that let you preview upcoming big games, but also had Net Yaroze games on there you could play in full (like the peculiar A Dog Tale). It was these odd snippets of ideas that I grew up on and what at least partly ignited my interest in games outside of the blockbuster spectrum.

Reading these memories of the Net Yaroze days stands as a reminder of how far the accessibility of game development and distribution has come since then. We can celebrate all that has happened in that time, especially as to how much more accepting of unusual videogames we seem to be as a population of players these days. But it also captures the energy created the momentum and that some of may have lost over time as they become increasingly distant from their own roots in game creation.

You can and should read the full article over on Gamasutra.