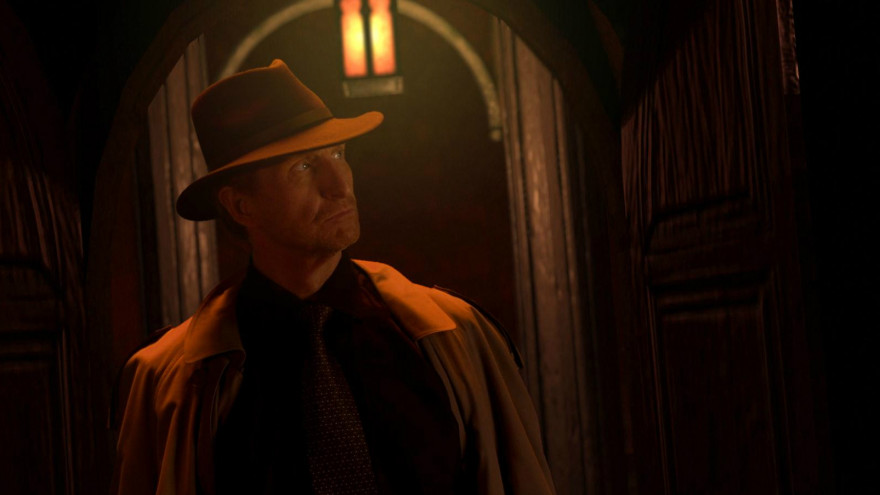 At some point in the latter half of Tesla Effect: A Tex Murphy Adventure, while invading a mercenary-destroyed research facility named after Nikola Tesla, main character and lowbrow jokester Tex cracks a joke where “the John Birch Society” is the punchline. It just sort of hangs there, unwanted by the rest of the humor in the game, foreign, and yet also the most sophisticated joke the game has on tap. It’s like a really rare tumor wearing a moustache and a hat in order to fit in with all the body’s other organs. And then, right after this amazing WTF moment, you’ll die like twenty times trying to pass through some obnoxiously rendered lasers in an ill-advised platforming section that is so poorly executed it’s laughable.

I bring this brief vignette up because both the joke, for all of its weird intrusiveness in a comedic rubric that is usually content to settle for the most obvious puns available, and the lasers, for all of their horrible, horrible design, are at least something. The rest of the game is rote and by-the-numbers, slurring along like an adventure game should without really doing any of the things that make adventure games interesting. Give or take some transphobia, homophobia, and ableism—themselves curiously bland and half-assed—the experience of playing Tesla Effect: A Tex Murphy Adventure can be summed up thusly: Yup, I sure am playing an adventure game.

The best adventure games have an engaging story and interesting puzzles. Tesla Effect doesn’t have either.

Like a lot of games birthed through Kickstarter, Tesla Effect: A Tex Murphy Adventure is probably more enjoyable if you’ve played and enjoyed the previous games in the series. How much more? Having not played any of those games, I don’t really know. I’m pretty agnostic about how much familiarity might help, though. The best adventure games have an engaging story (whether that’s because it’s interesting, funny, or both) and interesting puzzles. But I’d also argue that decent adventure games can kind of get away with one or the other: a haphazard or boring story can be saved by engaging puzzles (like B-list Sierra games), or a boring or confounding set of puzzles can be offset by an engaging story (like B-list Lucasarts games). Tesla Effect doesn’t really have either.

The problem isn’t as simple as a dearth of creativity on display. Rather, a series of confounding choices were made. For example, during the first two or three chapters of the game the puzzles seem like more of an afterthought. You start the game as Tex, waking up with 7-year amnesia, and your initial goal is to figure out what happened the night before. You go talk to people, and these people all seem to have a history with Tex, but whether you’re excited to revisit beloved characters or not, the need to reintroduce these characters means that progress at this point is based around arbitrary in-game checkpoints that happen during conversations in order to advance. Alternatively, you need to wait until stores “open” in Tex’s neighborhood, and wouldn’t you know that a new one conveniently opens each time you reach a new checkpoint? Even the first actual object you need to proceed is found in a venue that is otherwise empty, but which Tex reminds us was a key location from a previous game in the series. Perhaps this location recalls hilarious memories for series fans. For me, it meant walking to the other end of the area, picking up the thing I needed, walking back to the place I started, and using it. It’s taxing, because it feels so scripted: “Remember Louie? Go talk to Louie!” Except, if you don’t remember Louie? Or Rook? It’s not that these conversations shouldn’t happen, or shouldn’t be loaded with easter eggs for longtime fans. I just don’t understand why they aren’t breaks from an interesting mystery to solve. This is the game mistaking fan service for, well, a game.

And that’s fine, to a point—this is a game for fans—but as an outsider it’s off-putting. I don’t know who the characters I’m stuck in dialogue trees with are, I don’t feel like I’m getting most of the jokes, and I don’t find that the occasional flashbacks to earlier games (prompted by examining random objects) are particularly enlightening. Characters from older games swoop in as shocking reveals; all the drama in the narrative arc of the story is based on reference points you already need to know prior to starting the game. Which of course isn’t a fault unique to this game, existing as we do in a world drowning in remakes, adaptations, sequels, and asset re-use. But the best things we build from the debris of all of the culture that already exists understand that the new things we’ve built still need to stand up on their own. It’s the difference between a song that samples another song because it makes sense and a song that samples another song to trigger a memory you already have.

The plot of Tesla Effect really only works in the sense that a) people familiar with the series will twig to shorthanded character reveals and b) explanations are eventually given for things that happened. At no point, however, do you feel like you’re sharing in a struggle, and at no point is the game funny enough to get away with having such a paint-by-numbers plot. And that’s because the jokes are all paint-by-numbers, except not in an awesome, campy way. I mean, spoiler, but if, when confronted by the two potential love interests this game offers you, you don’t know how “Ménage à Tex” is going to turn out the moment it’s a selectable option on screen, the humor in the game is probably just your speed. Predictable.

Part of the issue is the acting, which … it’s not horrible, but I’d say the conversations have a level of gusto that is slightly above Oblivion. The problem, largely, is that this saps everything of the necessary gravitas, whether that’s Tex’s sardonic joking, the bad guys’ zealous sincerity, or the game’s often juvenile and offensive humor. Consider: this is a game that doesn’t seem to see much of a difference between drag queens and a man who got a “sex change,” or at the very least seems to think that the two identities are funny in the exact same way. That’s offensive in and of itself, but when those jokes are actually made? The actors almost sound embarrassed to be making “woman with a penis” jokes. And they should be, because: fucking lame, even beyond the offense. But that’s the quality of the juvenile humor here: the game’s setting, New San Francisco, is a world populated by mutants, drag queens, femme fatales, a little person/computer whiz, mad scientists, Egyptian-lore fetishists, LARPers, and one white male detective just trying to make sense of it all. Which … maybe it’s not surprising that the only society Tex has ever heard of is the John Birch Society.