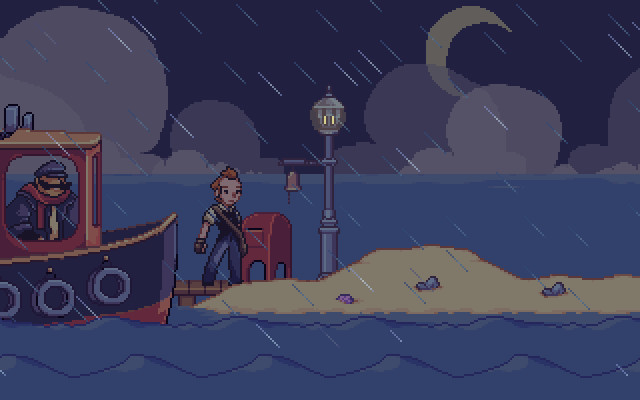 Described as a spiritual successor to the delightful Cat Poke, Tick Tock Isle is a point and click adventure game that doesn’t want to reinvent the wheel—and it’ll charm the pants out of anyone who thinks that wheel is outdated or boring.

The demo was originally released four years ago by the duo of Jason Boyer and Ryan Pietz. “We spent an entire summer designing our biggest game yet,” Boyer writes on his blog. “Unfortunately, we didn’t have anyone to program it beyond a demo, so it lingered in our unfulfilled dreams folder.” Finally in April 2015, they decided to “make our dream a reality and began programming the game ourselves in secret.”

It’s only befitting that their game about time is also a portal to the creators’ own past—while also taking place in the future. The mess of timelines interweaving in both the game proper and its own creation results, ironically, in a kind of timelessness. Called to a mysterious island by a mysterious phone call, the protagonist, a clock repairmen, arrives on a stormy night. The person who summoned him is nowhere to be found, but a massive, rusted old clock in the attic is what appears to be the problem. Upon fixing it, the protagonist leaves the house only to find himself in the not so distant past, before the mysterious island was left to abandoned to decay. By coming to understand the family who lived on the island and neglected to take care of the clock, you also come to understand why you were brought there to fix it.

more than just a nostalgia dump

Know for their nostalgic aesthetic and good natured comical stylings, Jason and Ryan’s work will make you smile even when you’re stuck on a particularly frustrating object puzzle. There are several call backs to classic mechanics like some simple platforming and Double Fine-esque puzzling. But Tick Tock Isle is more than just a nostalgia dump. Above all else, it’s sincere, recalling to a time in games before the need for grittiness for grittiness’ sake; a time when arriving on an island on a stormy night didn’t mean you’d find some horrible world in either the sky or beneath the ocean. Tick Tock Isle returns players to an era before Braid made designers think even their most adorable games required an undercurrent of depression in order to be taken seriously. Without sacrificing story, it manages to remain upbeat even while it explores the ravages of time.

You can play the demo or buy the full game for Windows.