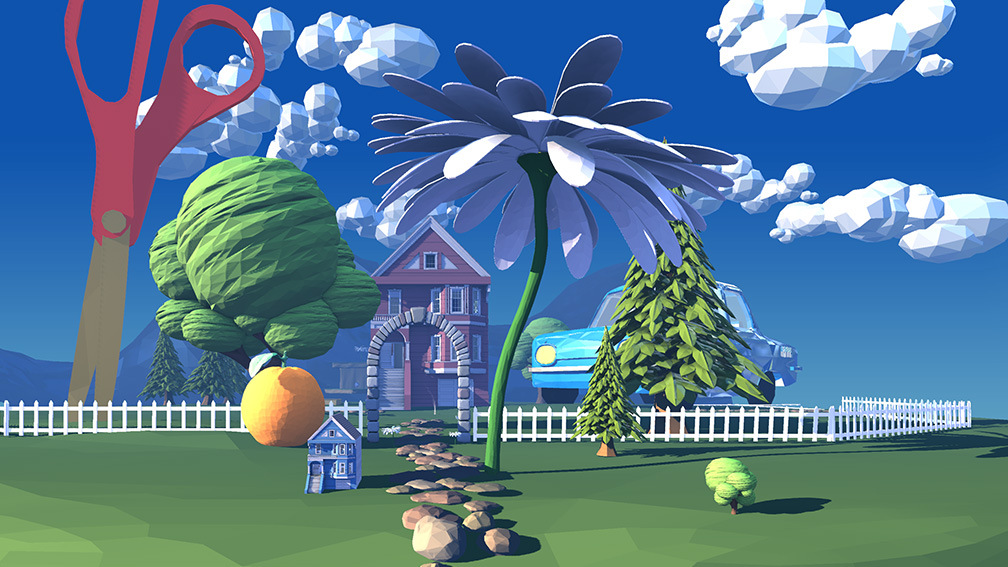 It’s still too early to tell—according to the creator about 25% of the first of many planned worlds are done—but Scale looks like it might be something very special. The game, which caused a quiet ruckus on Kickstarter late last year, was built around the ability to “suck the size” out of one thing and put it into another, effectively changing the size of any object in the game-world and using that ability to manipulate and explore strange environments.

It feels a little bit like Braid did in its early prototype days: clean and fresh, like a very clever designer has taken a smart concept and thought it all the way through, removing all of the fluff along the way.

The designer, coder and almost sole creator of Scale, Steve Swink, also feels a little bit like Jonathan Blow did in 2008, a game designer that has existed in the periphery of the indie game scene for a long time, seemingly one good opportunity away from making something spectacular. 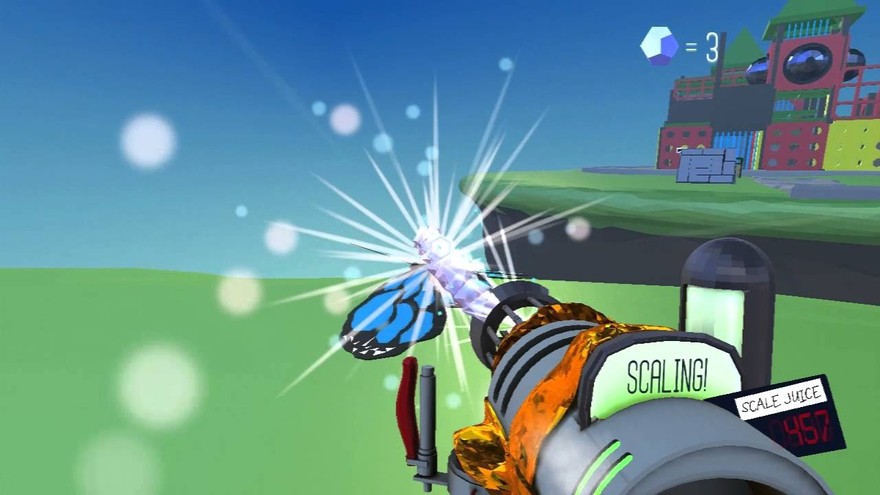 In order to understand Scale, though, you have to jump back to the game Swink made before it: Shadow Physics. In fact, the first prototype of Scale was made at a game-jam that Swink attended to get his mind off of that game, a game which he had spent two years of his life on before realizing that it would never see release.

When it became famous in 2009, it looked like completely new, like a sort of actualized version of what Echochrome and Lost in Shadow were then also attempting. The first videos showed a room with a few objects, a light source and a shadow character on the walls that could run and jump on the shadows cast by the objects. The concept was visually grabbing enough to create chatter before it was past its first prototype. With the chatter came enough money for Swink and his partner Scott Anderson to fund two years of production.

But while being a shadow looks interesting, it doesn’t necessarily imply any interesting gameplay. “We were always trying to decide what the gameplay would be,” Swink says, “I feel now that you should always start with what the game is and how it plays and what the player does, and not pursue the design unless you have that pretty clear in your mind.”

Swink was not new to game development at this point—he had spent eight years teaching game design and writing a book about what it means for a game to “feel good” to play—so even worse than the lack of activity was that Shadow Physics always felt wrong. Controlling a 2D character on the walls of a 3D environment meant that the player’s perception of speed was constantly changing, and the player never really felt in control. “Basically, it felt really bad,” Swink says, “and if I wrote a book about game-feel I couldn’t release a game that felt bad, right?

“So we decided to fold ’em. It just wasn’t working and after two years we didn’t have anything cool or interesting to show for our work.”

None of that was a problem with Scale.

While Shadow Physics never got past being a noun without a good verb, Scale is all verb—and while Shadow Physics had an unconventional connection between what the player did and what the player avatar responded with, Scale controls like any other first-person game. This meant that, just from the core idea of a game about scaling, both the gameplay hook and the feel had already dodged the two big problems that sunk Shadow Physics. “The game has been cool and interesting to play from the outset,” Swink says. “Actually, the bigger challenge has been getting people to understand the implications of being able to scale stuff more or less as much as they want.”

A very clever designer has taken a smart concept and thought it all the way through.

“Scale has always been fun to play,” Swink says. “I didn’t commit to making this game until I felt like it was an interesting, good concept that played really well.”

The idea that became Scale came to Swink, interestingly enough, at a talk by Jonathan Blow.

“Jon was talking about experimental mechanics and doing deep-dives on things and the concept of integrity in design,” Swink says. “While listening I was sort of idly pondering things that are obvious and easy to understand by normal humans, but haven’t been explored and would relatively easy to implement. I’ve done a lot of 3D modelling, so my mind went: translation … rotation … scale!

“Yeah, it kind of just popped in there.”

Swink shares another characteristic with Jonathan Blow: a strong belief in the importance of authorship, and that designers should also be coders. It does not make things easier. Swink is a self taught programmer so things take longer than they otherwise would, but, in his opinion, it’s worth it. “I’m reaching the point where I can make the things that I want to make and mostly do the programming myself, and I think you have to do that if you want to design something that’s personal and has integrity.”

You can see it in Scale: not just in the novel “verbs” but in the bright, almost Nintendo-esque minimalism. Swink is not creating all this by himself, of course: he has a group of collaborators that he is very quick to heap praise over, particularly Eddy Boxerman of Osmos and Dale Beran of the webcomic “A lesson is learned but the damage is irreversible.” But there is still only one creator. Scale is Swink’s game; he is the author and creator.

“I don’t think you can make a clear generalization that all games are better if they have a clear author. I will say that the games that I like—the ones that are interesting to me—are generally games that have that. A game like The Witness, that is Jon’s game. Everything that is in that game is his, even though he has a pretty large team working on it now.

“The analogy I like to use is colors being mixed—if you have one person and their idea is a brilliant blue, then that color will shine in the finished product. But if you have 20 people and they have blue and red and green and yellow and they all want to get it in—then what you end up with is this muddy brown crappy color. Like baby poop.”

And when you make art, baby poop is generally not the pallette you are looking for. Scale may be in the early going, but its colors are shining through.