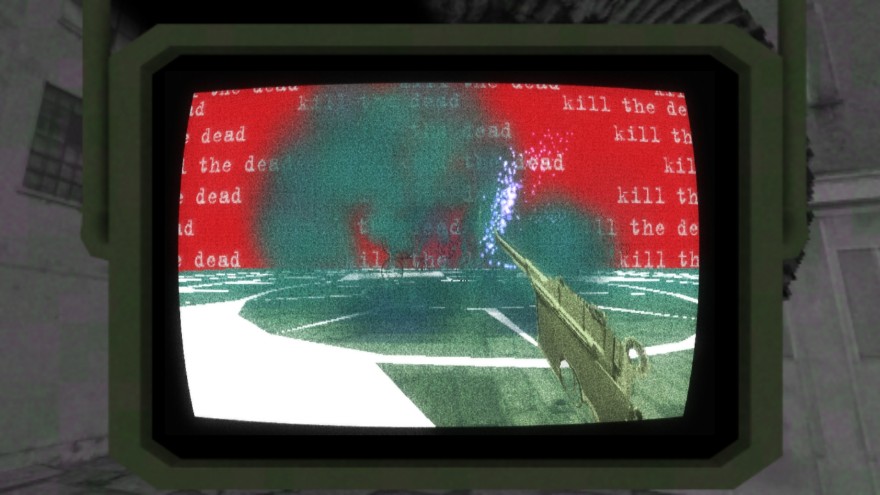 Geisterblut is fucking nuts. Being “fucking nuts” appears to be its raison d’etre—its final screen, which you can reach in just a minute or two, hammers this home—but it’s not “trying to be fucking nuts” in the manner of, say, a Russell Brand bit. It is, rather, a free-jazz skronk, a noisy freakout of a videogame, and if I’m being a bit vague here that’s by design. It’s no fun to spoil an act of improvisation.

Designed by nuprahtor for the game jam Ludum Dare 32, the game is ostensibly about hunting for ghosts. I’ll say this: you’ve got a gun, and there are some ghosts for you to hunt. But it’s the game itself that seems haunted, with some sort of vaguely German presence burbling under its surface, and a noteworthy Suda 51 influence, particularly the spectral abstractions of Killer 7.

There is a lot of talk of fathers, of inheritances. The clearest-cut parent to the game, besides nuprahtor, is the avant-garde musician John Zorn, whose 1990 album Naked City provides all of Geisterblut‘s tunes. That album seemed designed to test the limits of what instruments could do, zipping from smooth jazz to post-punk to bebop to surf rock, with vocals from the Boredoms’ Yamatsuka Eye. It’s an album of relentless invention, shocking even a quarter-century after its release, and it’s a perfect match for the wild, improvisatory nature of Ludum Dare. Geisterblut is as good a case in point as any that necessity is the mother of invention.