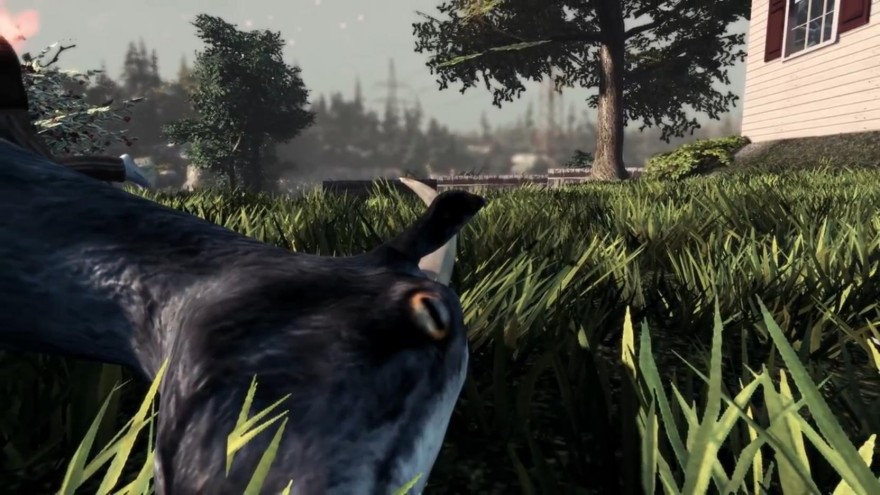 The accepted method of teaching a child how to color in a picture is to instruct them, repeatedly, to keep within the lines. They clench the crayon inside a fist, scratching at the paper with brash, unruly stabs as an adult descends upon them.

“Be gentle. Take your time,” they say.

Red blotchy lines of wax are smeared across a cartoon cat’s face, back and forth, breaching every neatly drawn black line. It’s all rigid elbow work, no wrist.

It’s the beginning of a life-long sermon about conformity that most of us go through. Don’t make a scene and you can slip by unnoticed, avoiding trouble. Keep within the lines. It’s advice that needs to be heeded, occasionally. Other times, more than likely during your teen years, you push against it as hard as you can.

You will think of this sermon during Goat Simulator, in which you attempt to push an entire goat, neck first, through a solid concrete wall, and nearly succeed after 10 minutes of erratic grinding. It’s a near-victory against the boundaries that attempt to keep you contained.

It starts with the low fence of a tame goat pen that’s easily obliterated with a sturdy headbutt. The thin panels of the fence explode skywards with illogical and immediate propulsion. It’s as if you don’t know your own strength. Like the tightly organized systematization of the world has been pulled taut, just waiting to burst upon the slightest contact.

The words “Knocking Easy” are slapped across the center of the screen as a green “COMPLETED” is stamped over the top. You get this reward for knocking an object into the air and it travelling a certain distance—barely a challenge. Your initiation to destruction starts with this overstated acknowledgement of your achievements, and it carries on this way.

It starts to feel more like a slightly amusing chore as the game ages.

From then on, the violent slapstick of ragdoll physics and hyperbolic reactions becomes your playground. You run into the tiny rooms of houses, upsetting the people inside, kicking and flipping, barely able to see as the camera clips through the wall. You don’t need those objectives and achievements; you’re having too much fun conducting the silliness on your own accord.

But it won’t be long until your mission turns to finding the pranks set-up for your entertainment, seeking collectibles, as well as the game’s approved form of carnage. The game’s sandbox shrinks until it becomes nothing more than a list of goals to complete. It starts to feel more like a slightly amusing chore as the game ages, outgrowing the playful youth of its first hour.

Goat Simulator isn’t as organized as that would make it sound. It’s a terribly—and purposefully—messy game. It’s an unfinished game. In fact, the Steam Workshop support is an essential feature, as it allows fans to create more playgrounds, maybe even hammer in an awkward multiplayer mod. Rather than rely on player feedback and requests, Coffee Stain Studios is skipping a step and handing out the tools so you can create what you want for the game. There’s also an “Involuntary QA” achievement that can be earned by crashing the game, which becomes harder to get as the rougher edges are gradually sanded away.

Other bugs that are deemed small and silly enough are kept in as visual gags. Epitomizing this is the goat’s ridiculous method of climbing a ladder: a horizontal walk upwards, as the neck and head wobble like a windsock through the wall. There’s catharsis to be found in ramming the goat through anything and everything, relying on screams and thuds for guidance.

It supplies freedom from being sensible or serious.

Goat Simulator‘s whimsical satire of videogame conventions would have you believe that it’s against the equilibrium; against perfection; against balance; against beauty, polish, and review scores. It supplies freedom from being sensible or serious. It carries that attitude in its absurdity. It’s also found within its two month journey from game jam joke to Internet phenomenon to top seller on Steam.

And in some ways, it is a success: this is the stupid game Coffee Stain set out to make. For an hour or two you can laugh your belly raw at the failings of simulated worlds and physics. It’s a game for those who can’t sit still. One that encourages you to see how far you can break it once you’ve worked through the list of objectives and the jokes have overstayed their welcome.

But the invisible walls at the edge of the game’s world are angry, bouncing you halfway across the map. Your goat flops back onto the ground. You realize you’re still stuck inside a pen—it’s just a bigger one.