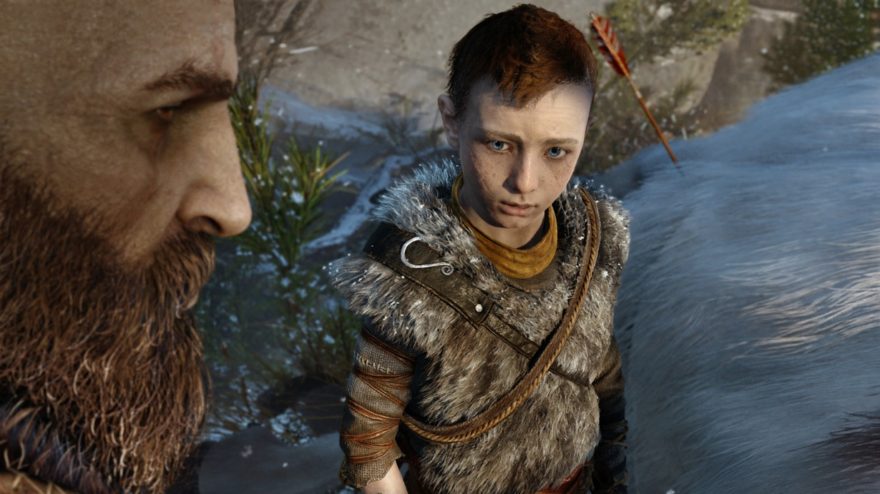 Upon seeing the new Norse mythology reboot of God of War at Sony’s E3 2016 press conference last night, I was ready to declare Kratos the new God of Phwoarr. I changed my mind pretty quick. Just because Kratos has a beard now doesn’t automatically put him up there with the lumbersexual appeal of Hot Ryu. And, in fact, he’s actually gone through the same facial hair evolution as Fred Durst—from gnarly-wannabe goatee to middle-aged man beard. That isn’t so cool.

Let’s not forget: Kratos is a profound asshole who, in his Greek myth form, had sex with women and then brutally killed them after. It’s hard to shake that history from a character, especially when we’re now being asked to find affection for him and his endearing relationship with his son. It’s the same issue that Uncharted 4 verged upon by making the cocksure Nathan Drake more relatable through quiet moments of him at home with his wife Elena (and especially the familial scenes of its epilogue), while also acknowledging that, yeah, this guy is a mass murderer who steals precious artifacts from their native lands while causing the destruction of pretty much everything in his wake. Tellingly, there’s a Trophy in Uncharted 4 called “Ludonarrative Dissonance” that you get for killing 1000 enemies. Uncharted creators Naughty Dog are well aware of the conflicting messages they present.

Kratos is influenced by the birth of his son

Of course, this isn’t the first time that Kratos has been a father. The original God of War had him so angry because he had been tricked by Ares into murdering his wife and daughter. He was a post-father, a has-been father, a father whose role was compromised by his own bloodlust. That Kratos, who churned the gods of Greek myth into a bloody butter, hasn’t entirely disappeared but he’s certainly a little mellower in his Norse myth form.

Rather than acting on pure rage, in the reveal trailer for this new God of War he spends his time haranguing his son while they hunt a deer. It’s the kind of shit that I (and I’m sure many others) had to endure in my younger years, my dad trying to teach me woodwork with a careful wrist and a firm screwdriver grip, while I pushed through the boredom and inevitable incompetence by banging everything I could find with a hammer (which I managed to break in half). Everything he tried to get me to do, I failed, or showed a complete lack of interest towards. Kratos and his son is an appropriation of this common kind of disjointed relationship. When Kratos pins down a gigantic brute and asks his son to finish him off with an arrow, it’s Kratos that gets the arrow in his chest. When Kratos tells his son to finish the deer off, he has to literally guide his son’s knife to the kill after he hesitates and says “I can’t.”

In other words, Kratos is all of our dads—he is the dad disappointed by his son’s inability and differing points of view. Kratos still wants to kill, kill, kill. His son, already facially scarred, sees a purpose in life beyond killing. That may give God of War one of the more interesting parent-child relationships in recent videogames. Other contenders include the aforementioned Uncharted 4, the upcoming Dishonored 2 and its daddy-daughter pair of assassins, the harrowing battles of Joel and adopted daughter Ellie in The Last of Us (2013) as well as Lee and his adopted daughter Clementine in the first season of Telltale’s The Walking Dead (2012), the ghostly dad trails of Rise of the Tomb Raider, and of course BioShock Infinite (2013).

The reason for this rise in videogame daddies, it is speculated, is due to the directors and writers of these games becoming parents for the first time themselves. That’s certainly the case with Neil Druckmann, the director of The Last of Us, who said his own fatherhood shaped his thinking on the game, going so far as to describe it as being “about the love of a father and a daughter.” Unsurprisingly, Cory Barlog, the writer of this Norse myth reboot of God of War says that the new Kratos is influenced by the birth of his son, which he describes as “a tremendously transformative event that had [him] thinking about all kinds of change in life.”

“It is hard for human beings to truly change, but one thing that can really motivate us is the thought of being responsible for a life, and especially the life of our child,” Barlog writes. “The weight of that responsibility drives the instinct to protect, to want to prevent the mistakes of our past being delivered upon them. There is no end to the lengths we will go, no adversity we will not overcome, to be better… for them.” Expect Kratos and his son to go through some shit together, then. Should have called it Daddy of War.

God of War is heading to PlayStation 4. There is no announced release date yet.