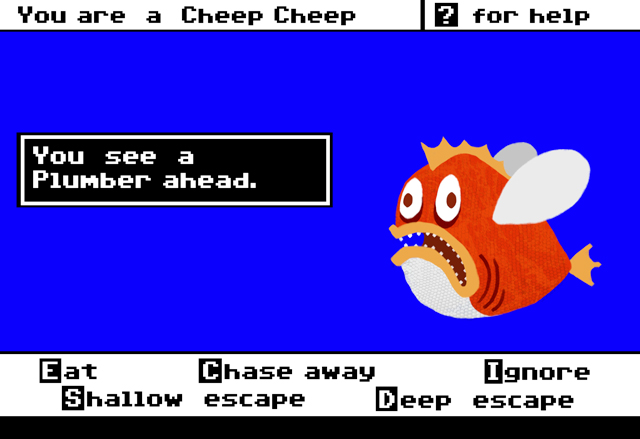 Confession time: I’m scared of fish. Not scared to death, mind you. I will occasionally eat sushi. I can keep my cool in the fish aisle at Pet Smart. The sight of a prize bass mounted on the wall doesn’t send me into a panic attack. Still, there is something unsettling about the makeup of fish—a disturbing aspect to their nature that seriously creeps me out. Because of this, I will never, ever watch Piranha 3D, and I put videogames about fish in the same camp as survival-horror games like Resident Evil.

The problem is, to a degree, cosmetic. Although a friend of mine is horrified by small furry animals, I think mice are cute. Fish are a totally different story. Their jagged rows of teeth are more horrible to me than Nosferatu’s fangs, or the evil grins of the creatures from Critters. As for fish eyes, they look strangely like peepholes—which are pretty much the epitome of paranoia. For that matter, why does every single fish wear the stern expression of a Russian diplomat? They never seem at ease—not even the yellow-and-orange tropical ones. And for good reason. Any time anyone brings up an aquarium, it’s always the same tale of how one fish killed the rest.

One of my earliest memories is of winning a goldfish at the state fair. It died soon after. The remainder of my childhood would be haunted by fish. Both of my granddads were big fishers, and my dad fancied himself one. A fishing pole was shoved in my small palms at a young age. I fished in perpetual fear. What if I caught one? I was expected not only to reel it in, but to manhandle it, grabbing it with a firm grip and wresting the lure from its gaping mouth. Since I dreaded this even more than the fish did, I took it upon myself to be the worst fisher imaginable. The one time I did catch a fish, I got lucky and it fell off the hook by itself. This is why I have the utmost respect for noodlers, crazy Southerners who wade chest-deep in lakes, catching catfish with their bare hands. This is also why, years later, I would spend hours gleefully catching horse mackerels in Animal Crossing. It felt safe.

It’s true that ichthyophobia, or the fear of fish, isn’t very high on the list of phobias. Even for me, it is largely restrained, surfacing when I’m alone on the beach at night, which is next to never; and in a recurring dream I have about enormous fish that can swallow luxury liners. As a kid, I was convinced there was a man-eating fish living at the bottom of our swimming pool. My imagination was encouraged by the memory of being devoured by sharks in the adventure game King’s Quest IV: The Perils of Rosella.

Did I mention that the uncanny valley is even more uncanny when applied to fish?

Fear is a survival instinct. Without it, we would probably all be dead. But it’s also profoundly stupid. The other day, a panicky stranger begged me to kill a hapless bug that had crawled into her car. People are afraid of totally harmless stuff: their own body hair, porcelain dolls, the outside air. As for me, well, I have Endless Ocean.

Like any good horror flick, Endless Ocean should not be played late at night with the lights off. This is peculiar, because Endless Ocean is an educational game about discovering marine life—sort of an interactive version of a BBC nature documentary. Endless Ocean was made for the Nintendo Wii, and it might be intended for kids. Okay, it is for kids. The European ratings board says it is suitable for ages three and up. There is no violence, and little in it could be considered dramatic tension. The game lacks even a hint of negative reinforcement. (Although its sequel, Endless Ocean: Blue Planet, added shark attacks, to my dismay.) Your time is spent swimming with fish, feeding fish, and perhaps taking a few snapshots of fish. One of its major selling points is that, unlike other diving sims, you can pet the fish by shaking the controller. Even I must stop to question myself. “How can this even be scary?”

The answer is, of course, fish. Consider the shadowy form of a barracuda drifting into view through murky water. The unnaturally long body, accented by a fearsome pointed jaw, floats lifelessly as you approach it. Then, the details of its fins and scales become clear. It’s hideous, and even though it can’t hurt you, you have a bad feeling in your gut: You don’t want to mess with this thing. Stirred, it turns, revealing its horribly mangled teeth, capable of removing a sizable chunk of flesh. Again, the teeth. It lunges directly at the camera, as if it was going to jump out of the television and onto your couch.

Did I mention that the uncanny valley is even more uncanny when applied to fish? This can be seen in the game’s collection of sharks that look like Freddy Krueger. Meanwhile, sawfish and hammerheads and eels twitch in mechanical gestures. One of my gravest concerns while playing is being snuck up on by a whale. (How a whale can sneak up on anything is another question, but, trust me, it happens.) Every so often, I’ll turn around and see what at appears to be an underwater mountain looming over me. Then, I notice it has a mouth.

Even feeding the fish in Endless Ocean makes me a little anxious.

I want to scream, but all I can do is gasp. Endless Ocean is nearly silent, except for the sound of heavy breathing into a diving mask. This makes for a subdued sense of horror—more Alfred Hitchcock than Wes Craven. The experience is devoid of cheap thrills. There are no blood-drenched predators with bear-trap teeth. The game has a brooding, seething quality that gets inside your head—a kind of fear that fish especially provide.

I have never sought the help of a psychologist. I would only be wasting their time. My fear isn’t one of hysteria, but a mild nervous awareness, in which I have been let on to a distressing reality that others have failed to recognize. This is why I’m slightly bothered when dining with someone who has ordered a flounder with the head still on it. Also, I don’t care for pictures of fishermen posing with their record-setting catches. Even feeding the fish in Endless Ocean makes me a little anxious, as schools of coral reef fish and one huge grouper fight over the pellets with such eagerness that they could easily turn on me.

Fish are just creepy. Sometimes I question whether Kafka’s The Metamorphosis or Seaman, a virtual pet game in which you raise and even talk to fish with human faces, is the premier work of existential art. On that note, I’ve noticed that while there are plenty of games about fish, very few actually let you be one. It’s no wonder. That would trigger an acute bout of Kafkaesque dread. No one in his right mind would touch it.