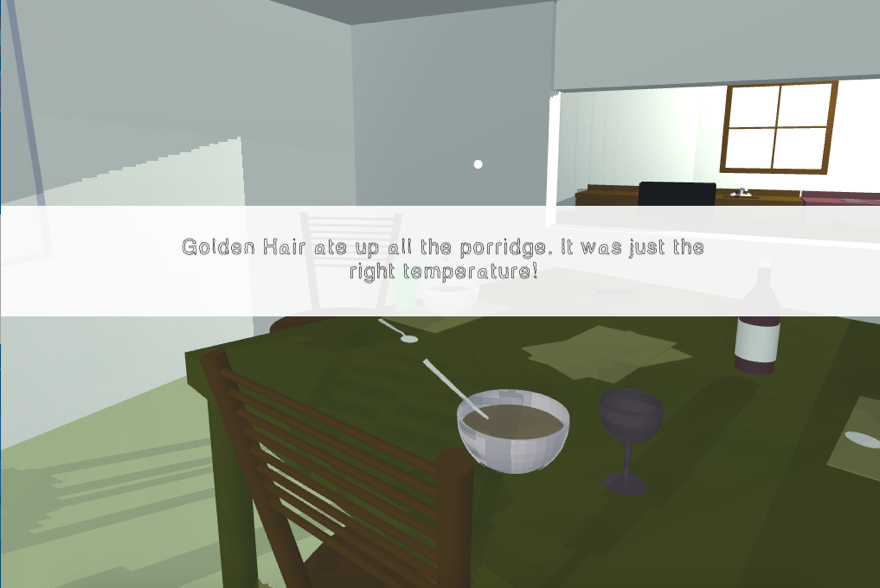 At the time of his death in 1527, the political philosopher Niccolò Machiavelli had never stated his position on works being placed in the public domain. Fair enough: “public domain,” as presently constituted, was not an idea in Machiavelli’s time. One can, however, suspect that the author of The Seven Books on the Art of War and The Prince wouldn’t have been big on the concept. Seeing as Machiavelli died nearly five hundred years ago, though, he has little say on the matter.

Thus, along with the fairy tale Goldilocks and the Three Bears, Machiavelli’s The Prince appears in Ed Curtis-Sivess’ Goldi, which was created for the 2015 Public Domain Jam. At first glance, this might seem like a strange pairing. It remains strange upon further glances.

Here’s how it works: You play Goldi in the first person, entering the three bears’ home and selecting some items to play with. Porridge—too hot, too cold, or just right—is, of course, an option. After a while, the family of bears return home. You hide. Papa Bear walks into the house, reciting a quote from The Prince. He then discusses the missing porridge with his wife. Shortly thereafter, Papa Bear discovers you, and asks a question that often references The Prince. Answer it correctly and he predicts great things for you, before drawing the game to a close. Answer incorrectly and you get to play again.

Fairy tales are rarely static stories; they are passed on orally, evolving with time. Nor, for that matter, are fairy tales expected to be wholly true. In that respect Goldi fits perfectly into the fairy tale tradition. It is respectful to previous stories, but not dutifully so. Maybe in 2015 the most apt version of Goldilocks is an extended intellectual property gag.

The story you know as Goldilocks isn’t even the original version of the fairy tale. (Original is a tricky word when you consider that fairy tales aren’t always passed down in writing.) An earlier version of the tale, The Story of the Three Bears, involved three bachelor bears and an old woman. That earlier work about bachelor males probably pairs better with Ayn Rand’s Atlas Shrugged, which won’t enter the public domain until late in this century. (And oh what an amusing day that will be!) Until then, lovers of fairy tales and philosophy have Curtis-Sivess’ Goldi, and that should be more than enough to keep them happy.

You can play Goldi for free on itch.io.