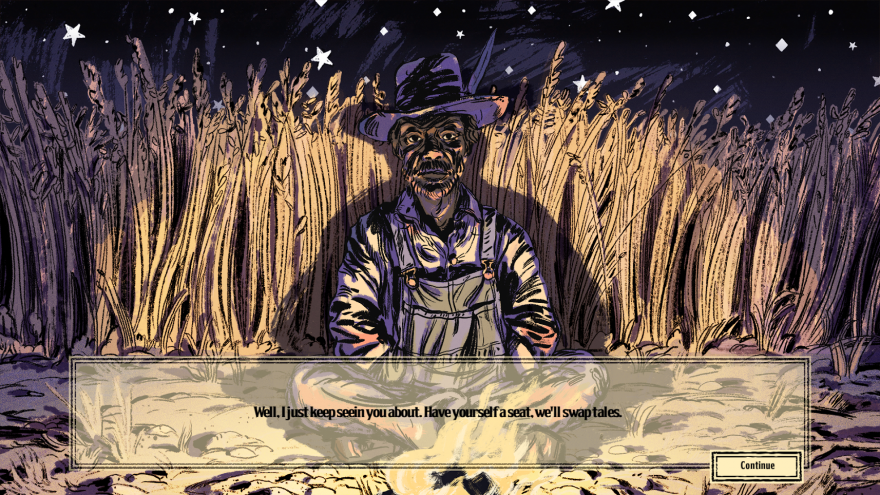 The tale is the map that is the territory.
You must remember this.”

American roads tell stories. From Huck Finn’s trek across socioeconomic boundaries to Kerouac’s rhythmic ode to a dying movement, American roads invite a uniquely existential wandering that could (and has and will) fill endless amounts of books, movies, and songs. Because buried beneath the surface of any American road are the layers upon layers of settlements and stories passed. Built on a foundation of reinvention, the American landscape welcomes the maverick, swallows him whole, and leaves only enough bones behind to entice the next unsuspecting traveler. The American identity is one of perpetual searching, discovery, and erasure—a journey home, where “home'” is a concept both unattainable and untamable.

“home'” is a concept both unattainable and untamable

As Wednesday from Neil Gaiman’s American Gods puts it, America is “the only country in the world that worries about what it is.” Because while “no one ever needs to go searching for the heart of Norway,” the search for the heart of America has led to things like jazz and folk music,  as well as some of the greatest novels of the past century. Captivating the greatest and most creative minds from around the globe, American existentialism isn’t the story of a country. It’s the story of a world colliding with itself: the image of a snake eating its own tail.

Johnnemann Nordhagen (who was the programmer of Gone Home) recently announced that his latest project will explore manifest destiny in all its many shapes, colors, and cadences. The first title from Dim Bulb Games, Where the Water Tastes Like Wine will combine 2D visuals with a 3D map of the US that allows players to experience the multiplicity of identities that helped define the country.

As Nordhagen explains to Eurogamer, “American folk culture is one of collaboration, [that’s about] sharing songs and stories but giving them your personal twist. [American folk] comes from many different cultures—the European settlers, the slaves that were forced to live here, the workers who have traveled here in search of opportunity, and of course the people actually native to this land.”

While “most of the romantic road stories out there are [about] white males traveling and having adventures,” Nordhagen tells Polygon, many of the country’s most influential travelers never had the freedom to tell their own stories.  Spanning from cost to cost and over the course of an entire century, Where the Water Tastes Like Wine aims to tell “the stories of people who have been pushed to the fringes.”

American folk culture is one of collaboration

“[In a lot] of cases people are on the road not out of choice but out of necessity,”Nordhagen says. “They are being crushed by the rolling wheel of American society and they are doing their best to get out of the way.” From the spread of African Americans across the south, to the movement of migratory workers, and the forced marches of native Americans, the game hopes to capture the essence of the songs, poems, and stories that emerged from the most treacherous journeys in US history.

As evidenced by the teaser trailer, Where the Water Tastes Like Wine will incorporate elements of the surreal and fantastical. Nordhagen tells IGN that “every once in a while we see through the cracks in the world and get a peek at other realities. It’s recognizably America, though—poker and trains, the Southwestern desert mesas, and something that suggests the colorful and idyllic farm produce labels of the beginning of the 20th century.”

Though not much is known about the exact details of Where the Water Tastes Like Wine, the concept art promises a world of fantastic realism where magic emerges from the richness of storytelling itself.

Where the Water Tastes Like Wine is set to release in 2016. You can keep up to date with the game by visiting its website.