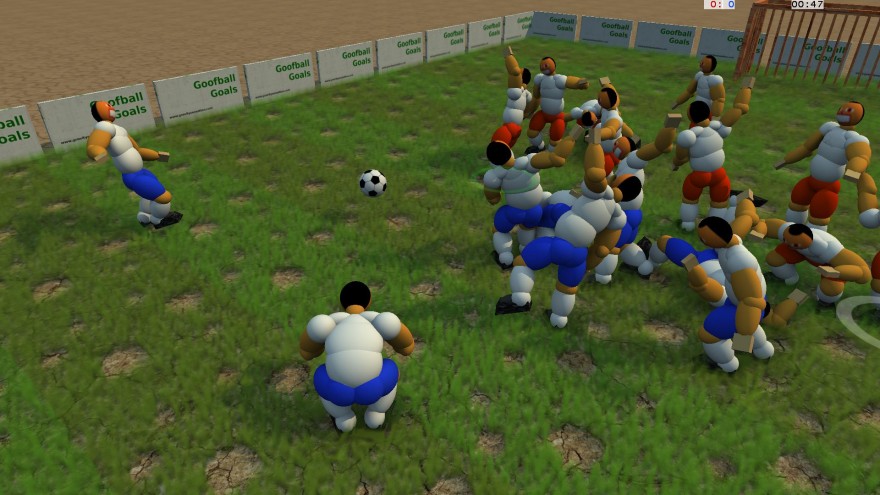 Comedy is throwing a ball square at a human being’s face and then watching them flail their legs in the air as they dramatically fall to the ground. Unfortunately, you can’t do that in soccer. That’s against the rules. Soccer isn’t very funny.

That doesn’t mean it can’t be, though. In fact, the sole purpose of Goofball Goals is to produce laughter from the seriousness of soccer. The classic game and its rules are intact. Shoot the ball into your opposition’s goal more times than they whack it into your own, and you win. Even the traditional black-and-white ball is unchanged.

The incongruity—and the comedy— is found in the players. The team of ragdolls seem to be operating on QWOP‘s rules of limb micromanagement. Running in a straight line can only be managed with tiny steps and arms held out like wings. Instruct your player to turn even slightly, and you’ll almost always trigger a dogpile of fallen bodies, leg-spaghetti, and on-cue chuckles from the sitcom soundtrack.

My biggest eruption yet came from seeing a player whom I had attempted to kick the ball with, hop over to the waist-high boundaries of the pitch, and then flatten them with a loud crunch.

It’s stupid. This isn’t clever comedy, but draws from the hilarity which results from witnessing human failure. A primal comedy. Simulating that imperfection when creating games is usually an amusing secret kept by the developer, an accident to be fixed. Here—as with QWOP, Octodad, and Surgeon Simulator— it’s the entire purpose of the game. You don’t even need to be playing the game to appreciate it, hence the Computer vs. Computer mode, which lets you play the part of viewer.

Once the visual buffoonery starts to wear thin, Goofball Goals gives you enough customization options to spice it up. Try a smaller pitch with more players; more balls; smaller goals. Not enough? Play it against a friend and absorb their fresh laughter. More? Find another player online for a semi-serious, all-ridiculous game of competitive soccer. If either of you score a goal I can guarantee it was a well-constructed accident.

If you want to find the root of Goofball‘s comedy, then all you need to do is play the “click ass” mini-game. Players are lined up along thin planks and see-saws. When you click the mouse you launch a ball out of the screen. You can put two and two together, I’m sure. This is gameplay comedy at its most raw.