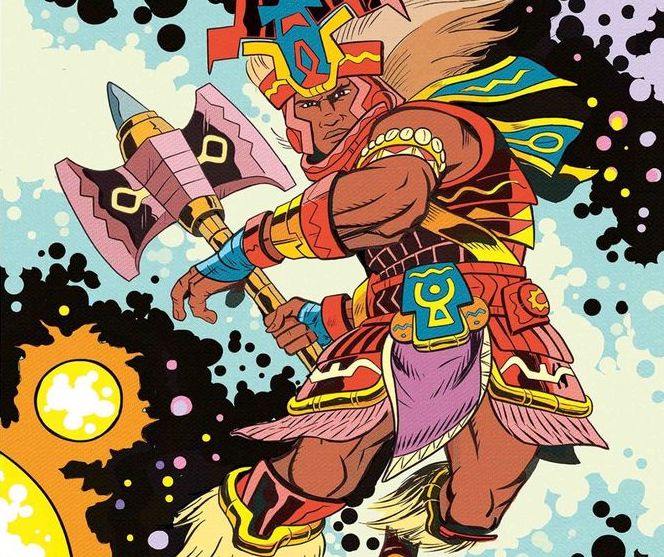 A lot of nerd culture is dominated by European mythology, from Thor to Lord of the Rings or even Harry Potter, just to name a few. There’s nothing wrong with that. I’m as crazy for Norse mythology as the next girl. But far from just a disservice to African or Asian or Middle Eastern cultures, this blind spot is a an even bigger disservice to nerds everywhere. There is a huge well of awesome mythology that has gone untapped, with epic characters and stories that would make even the most dignified comic book fan salivate.

That’s where Brazilian artist Hugo Canuto comes in, who decided to give the gods and goddesses of Afro-Brazilian mythology the Marvel treatment a couple years ago.

Born in the Salvador, Bahia (and my own home city), Cuanto grew up in a community with deep African roots, housing one of the biggest populations that still practices modern day, Yoruba-based religions like Candomblé and Macumba. During the Atlantic Slave Trade, an estimated 1.2 million slaves were brought to Bahia alone—that’s over 4 times more than the entire United States, and somewhere between a third to a half of the slaves brought to Brazil total. The traditions passed on through the African Diaspora live on in their influence over Brazilian culture, with dances like Capoeira and Samba, and in folk customs like wearing white on New Years to honor the sea goddess Yemanjá.

As a child, Cuanto took notice of his city’s strong African identity, falling in love with status of the deities known as Orishas (or Orixás in Portuguese) that stood tall over bodies of water throughout the city, like in the Doro do Tororó and Rio Vermelho beach. Sadly, despite the fact that Brazil houses one of the largest African populations outside Nigeria, Afro-Brazilian religions continue to be persecuted and stigmatized by the predominantly Christian population. Cuanto became more seriously involved in the preservation of these religions a couple years back as an urban development architect in Bahia, after a historical monument sacred to the Orisha named Xangô was vandalized.

“there is something greater that unites the peoples.”

“Understanding the hard reality of discrimination and persecution that these beliefs suffer, the desire arose in me to tell a story that celebrated the Afro-Brazilian religions,” he says. “I want our work to show the world how beautiful and strong Brazil’s African heritage is.” After recreating Jack Kirby’s famous Avengers #4 (1963) cover with Orishas and posting it online in 2015, Cuanto received an overwhelming amount of positive feedback. In his emulation of the Avengers, Thor was replaced by Xangô (the Orisha of justice), Iron Man is replaced by Oxaguiã (the warrior), Captain America was replaced by Ogum (god of metal work), and Ant Man is replaced by Ossain (god of the forest). Recently, he took to crowdfunding in order to extend the project into a full comic book, and that too succeeded far beyond his expectations.

“As an artist, I have always sought to understand the role of myths and religions as active forces in the formation of societies,” Cuanto says. “The inexhaustible and powerful source of myths revives and regenerates the collective unconscious, reaffirming the traditions and reminding us that, behind a world of lights and consumerism, there is something greater that unites the peoples.”

Cuanto partnered with comic book artists Marcelo Kina and Pedro Minho to create more individual prints and put together the first 90-page issue. Entitled Tales of Òrun Àiyé, he only has two issues planned, which are based on the Itan collection of Orisha folklore—but there is no lack of more comic book-worthy material elsewhere. The Orishas encapsulate the beautiful yet painful clash of cultures that lies at the heart of Brazilian culture. Like the Norse and Greek gods, these Afro-Brazilian deities are characterized by a district humanness, with flaws and drama and lost loves. “The strong and wise mythology of the Orishas can teach us about diversity, breaking stereotypes about Africa and black culture,” Cuanto believes. In fact, the Yoruban gods even displayed impressively progressive concepts toward gender, with Obatala (the god of all humans), always depicted as androgynous and without fixed gender.

there is no lack of more comic book-worthy material elsewhere

For Cuanto, spreading awareness of Afro-Brazilian mythology through comic books feels only natural. “When we speak of comics, it is a global language, present from Japan to Argentina. It is an aesthetic that allows multiple narratives and reinventions.” Though, due to the sensitive nature of depicting a colonized religion, he’s careful to approach it respectfully. “The importance is to adapt narratives that have crossed time and distances through this universal language, while still retaining the same wisdom and enchantment they had when they were told in the old cities of West Africa.”

You can purchase prints and pre-order the first issue through the project’s Facebook.

Update: A previous version of this article mistakenly labeled Norse mythology as “Anglo.”