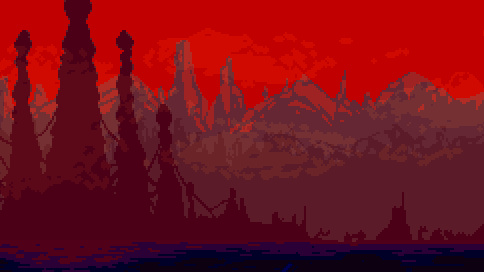 Octopus City Blues is a bizarre adventure game being developed by new kid Ghost in a Bottle. Originally Kickstarted in September 2013, the game’s dynamic pixel art, gross in both detail and aesthetic, is the most obvious draw. But the real hook lies in its original setting and premise. Octopus City Blues takes place in its namesake city and follows a lowly tentacle-cutter named Kaf Kafkaryan as he attempts to navigate middle-age and his nightmare-inducing octoblood addiction. Though the final release of Octopus City Blues has suffered a push to 2015, Ghost in a Bottle has uploaded a demo to indie game distributor itch.io which you can play right now.

The primary focus of Octopus City Blues is learning about its world through exploration and character interaction. At the player’s behest, Kaf will anxiously converse with everything from hideous molting mutants to supersized dung beetles using a dialogue system based on environmental observation. See a blue-skinned salesman visiting a certain shady lady every few days? Feel free to inform his wife. You could even tell the Rat Kings that you think someone is dealing octoblood on their turf without paying the proper dues. Of course, you don’t have to be the bad guy, but it really is a squid eat squid world out there. Regardless, Kaf’s choices are yours and developer Ghost in a Bottle aims to make them run deep enough to incite multiple playthroughs.

Octopus City Blues has more than a touch of ludicrous (and lovely) surrealist imagery, but The Franz Kafka Videogame it is not. And though it peddles many of the themes Kafka pioneered, especially body horror and the labyrinthine urban, they aren’t presented as strictly abject. Maybe the difference is perspective; unlike The Metamorphosis, you are not privy to the protagonist’s innermost thoughts, which frees you from the anxiety that pervades a character like Gregor Samsa, and which must surely pervade Kaf Kafkaryan outside of your influence. Perspective is important and a positive attitude makes a big difference. Octopus City Blues has a positive attitude.