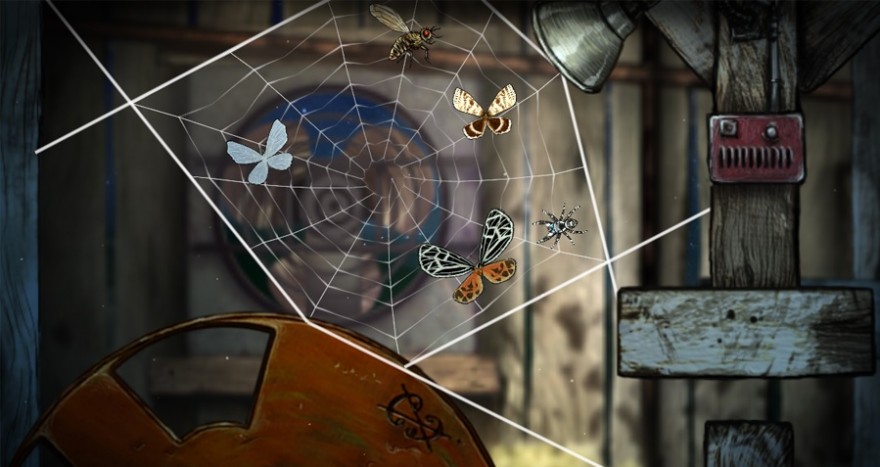 Spider: Rite of the Shrouded Moon has a title that would probably be accepted as part of the Castlevania series (which includes Legacy of Darkness, Circle of the Moon, and Curse of Darkness for starters). This is probably not a mistake. Consider that Rite of the Shrouded Moon, as often with Castlevania, is about navigating and surviving a mysterious Gothic abode. Instead of Dracula’s castle, it is the Blackbird Estate that you explore, it said to contain equal parts insanity, secret passages, and coded messages.

a mansion that feels alive

Vital to setting the tone in and around the enormous stony-walled houses in these games is the weather. When you think of Dracula’s castle you probably see dark, swirling storm clouds and forked lightning. It’s an archetypal signifier for the home of evil that is rooted in the settings of Gothic fiction. Storms and lightning are often used as it’s a destructive type of weather that clashes and erodes the castles, which are usually exposed atop clifftops or sat next to roaring coasts like stone-backed giants, aged by the years. This placement and the surrounding weather is both a geographic and meteoric symbol of the metaphorical battle against nature these structures represent in housing their unholy occupants.

Castlevania has constantly drawn upon this classic imagery, with even the front cover for the original NES game pitching the castle against a midnight sky on a cliff, a crescent moon next to it being sliced by thin black clouds. This investment in this imagery hit its peak in Castlevania: Symphony of the Night, in which one of the directors took far longer than he probably should have coding one of the game’s areas so that, every time you entered, there was a chance for a different weather type: fog, heavy rain, thunder and lightning.

This is a little-known fact that the game’s most famous director, Koji Igarashi, revealed during Double Fine’s “Devs Play” series (find it at 01:21:00 in this video). It might be an insignificant part of the game’s code overall yet the care that was put into it shows the importance of the weather to the series (especially Symphony of the Night) and its grotesque architecture.

a new level of interactivity

Tiger Style, the two-person team creating Spider: Rite of the Shrouded Moon, is taking the relationship between the gothic castle and the weather outside even further. It’s not just one of the complementing flavors in the baroque stew, but whether it’s raining or sunny affects what secrets in the Blackbird Estate are available to you. And Tiger Style has built a system that is able to track what the weather outside your window is (presumably through the internet) and have that matched to the weather inside the game. It’s also aware of your local time it and alters the position of the in-game sun and moon accordingly.

This means that to fully explore all of the nooks inside the estate you’ll need to return to it at different times of day and in different weathers. The idea is to create a mansion that feels alive, revealing only parts of itself to you at a time, recquiring a map that spans time as well as space to navigate fully. This type of design is, again, typical of Gothic fiction.

As Audron? Raškauskien? writes in Gothic Fiction: The Beginnings, the castle in the typical Gothic novel is made out to be alive with a power that perplexes those who enter. This is reflected in its irregular shape and the complexity of its layout, which may or may not be due to an actual distortion beyond reality. She also cites Manuel Aguirre on the topic, who says “this basic distortion yields mystery, precludes human control and endows the building with a power beyond its strictly physical structure: the irregular mysterious house is, like the vampire, a product of the vitalistic conception of nature.”

Spider: Rite of the Shrouded Moon easily slips into a tradition of Gothic manors. But it takes the concept to a new level of interactivity (and perhaps immersion) by having the Blackbird Estate be affected by your local climate. This, in itself, is remarkable, but it’s also an appropriate blend of reality and fiction similar to the distortion that Aguirre finds inside the Gothic castle, granting it power over our fear and fascination.

Spider: Rite of the Shrouded Moon will be out on August 6th for PC and iOS. It will be heading to Android, PlayStation 4, and PlayStation Vita after that. Find out more about it on its website.