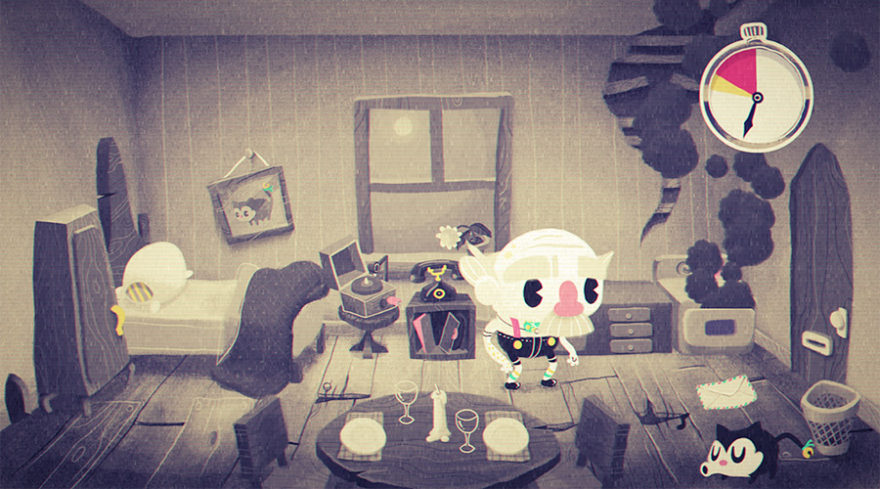 Grandpa has a big date but his house is a mess. The bed is unmade. Dinner is uncooked. Junk mail is strewn about. With only a minute to spare, can he whip the house in shape before his date arrives?

Grampy Katz in: The Big Date is a short but adorable game made by Brent “Meowza” Kobayashi and Brandi “Kukubee” Kobayashi. The married duo created the game in under 72 hours as part of the recent Ludum Dare game jam. “I wanted to make a game about an old person for a little while now because there aren’t a lot of games about [them],” said Brent. Ludum Dare, with its theme of “Ancient Technologies”, seemed like a perfect place to explore this.

the possibilities of making games that looked like cartoons

Inspired by their love of bite-sized silly games like Overcooked and Tenya Wanya Teens (2013), Brent and Brandi settled on their own silly game about an old man preparing for a date. “We’re sort of romantics at heart so that seemed like a cute idea to us,” explained Brent. This idea morphed into Grampy Katz where you take control of the titular character as he frantically dashes from one end of the room to the other while trying to finish all his chores in time.

What’s delightful to see among all this frenzy is the game’s old-timey vibe. As self-confessed cartoon buffs, the Kobayashis drew visual inspiration from 1930s cartoons like Mickey Mouse in Steamboat Willie and in Oswald the Lucky Rabbit. Another major inspiration was the upcoming game Cuphead as it showed them the possibilities of making games that looked like cartoons. Drawing from all these influences, Grampy Katz evokes a similar sense of mischievousness from the way the soundtrack syncs with the game’s frenetic pace (otherwise known as “mickey mousing”) to the way the characters bobble and move.

“I think [the game comes from] our love of old-school cartoons. It seems like back then, people made them just because they could,” said Brent. “We wanted to bring that same kind of spirit to games as well and just make people smile.”

To play Grampy Katz for yourself, head over to itch.io. The Kobayashis plan on further expanding the game with hopes of bringing it to iOS and Android. Follow the game’s progress on Twitter (@meowza or @kukubee).