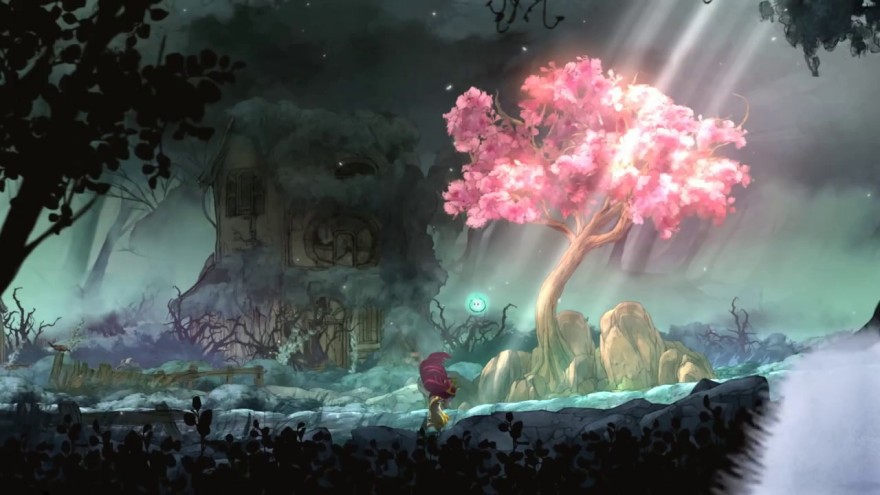 The first time I started crying in Child of Light, it was because I was overwhelmed.

I touched the Lady of the Forest’s hand and was transported to a stained-glass history of the fantasy world in which I had found myself, a world which, I was learning, I was supposed to save. The Lady of the Forest told me that the tiny blue blob that had been following me was her support for me on this quest. His only real skill thus far was to glow when I pulled the left trigger, and so, caught up in the enormity of the situation, and my smallness within it, I just lost my shit. I put my hands to my eyes, rubbing them and weeping, “Never shall I recover / The sun, the stars, and the moon!” Then the Lady of the Forest started telling me which way I should to go accomplish this feat, so that I might return to my own world, and so I stopped crying, and listened. Equilibrium returned. The Lady gave me a flute and the ability to fly.

Finn, the faerie wizard, was the second person to start crying. A jester and I approached him to ask if he could direct us toward the sun or moon, if perhaps either resided in a nearby well—which made about as much sense in context as it did to you just now—and he responded, “Hurrah, princess, you came!” I told him that I was not in fact a princess, a rejoinder which caused him to erupt in tears, hands to eyes. “I’m all alone again!” he cried, quite literally. The jester and I gave him a moment before pressing on, watching as his little arms, which seemed to emerge from his hair, wiggled on his face, his mouth a contorted kidney bean of sadness. He got his shit together long enough to tell me what his deal was (“And zounds! The Dark Queen turned ma kin to birds”) before losing it again, fists clenched around his histrionic little face.

By my count there are five such fits of spontaneous, uncontrollable weeping in the first couple hours of Child of Light, each lasting only a few seconds but accompanied by a bespoke “uncontrollable weeping” animation, generally of the hands-on-eyes variety. This is a lot of crying, but you get the feeling that you’re just supposed to roll with it. It’s part of the mood, you surmise.

This is, after all, a JRPG. Eccentricities are part of the buy-in for videogames’ most maximalist genre. The ability to put up with it grants entrance to a freak-flag-waving grandiosity unmatched by any media outside of like Russian literature and black metal. That this drama is sometimes enacted by bizarrely infantile characters is par for the course; that we are frequently urged to want to fuck those characters is also par for the course, but, obviously, a little less cool, by most people’s standards. Many fans of the stuff decry our Western outrage over this as misplaced, as the imposition of a morality system on an innocuous tradition of sexual presentation. Others realize that the surface trumps all, and that appreciating the great beauty that can hide within these works also means soberly recognizing their more problematic aspects, as well.

Only: none of this is supposed to matter in Child of Light. It’s by a Canadian studio, first off, so that takes the J off. But it is also not even an RPG in the Japanese style, exactly. It positions itself at once as a love letter and a corrective to the prevailing notions of what the genre is. It is not a billion hours long; most of the characters are female, and they are not subjected to “outfit change” cutscenes; the overarching plot is still diffuse but told elegantly rather than through 90-minute dialogue scenes aboard a space station. It’s a riff on the idea of a JRPG; that it calls itself one at all is sort of a provocation.

There are a lot of people who still love those billion-hour-space-station JRPGs, after all, and with that quiet fervor there always exists the chance for a resurgence. For those beating that drum, Child of Light offers an interesting proposition. It emerges into a world where the JRPG is at once beleaguered and fervently adored, and so presents a ten-hour stab at a new definition. It believes a JRPG needs exactly three elements: exploration of an interesting world; character progression through turn-based combat; and the exposition of a sincere, wide-reaching narrative. I have listed these in order of decreasing success, as far as this actual game is concerned.

After I got that flute and the ability to fly, I headed up through the ruined monastery, beams of light shooting through its crumbling roof, toward an overhang covered in moss. A milky white sky was dotted with navy blue ships in the distance. The peaks of ruined buildings and the crowns of trees dotted my path to the left. I could dip back down into the forest I had trudged through just moments ago, with only that tiny bug lighting my way, only now I was a conquering hero; I could dart up through those trees again, attacking the spiders that once hung ominously above me, rooting out tiny, meaningless treasures.

The screens kept scrolling and I kept flying, fighting, exploring. “Painterly” does not begin to describe the world I found myself gliding through, the very fabric of its canvas visible on the thatched red roofs of the village, in the muddy brown exterior of a rotted-out tree. I soared out of its decaying trunk and into an airy opening, and then up even higher still, where some sort of mega-bird awaited me. I did not get to watch its corpse hit the ground but I envisioned its messy landing in my moment of victory, music swelling infinitely.

When the game was over I emerged again right at the beginning, right as I had ended it.

This was, largely, the only thing to do in this grand, beautiful landscape, which rose and fell in almost symphonic grandeur. Flaming bats, fat-nosed trolls, crystal arachnoid archers, dragons and sea monsters and witches—I sliced them to the ground and waded through their invisible corpses. But at some point I looked up and I was getting 4500 experience points instead of 80 and I was taking away 83 hit points instead of 4 and I had seven skill points to spend climbing 12 skill trees that all went nowhere. Exuent bats, exuent trolls, exuent archers, stage whatever. I never died, and when the game was over I emerged again right at the beginning, right as I had ended it. The numbers would presumably rise forever, never for a second stopping to check whether I gave a shit about them.

What remained, then, were the people I couldn’t kill, those denizens of this dreamworld for whom the game stayed my sword. What remained were the words I could share with them—and what words Child of Light provides! Gnarled, half-manicured hedge mazes of language, paths curlicueing and meeting each other in unlikely detours. Ill-begotten metaphors rise, monuments to their own importunate need to exist. Avo the elder faerie, with little prompting, intones:

I am lucky ta be alive. When at ma house,

Beside the bloomin’ apple tree in the forest I arrived, this whiz

was in the air. I went around

To ma garden and attacked I was

Igniculus the elemental interjects “No!” in perfect rhyme. That the game deigns to make everything do so—without scheme or meter or logic, bending to the iron will of its creators alone—is the sort of drastic artistic decision videogames could use more of. I’d like to imagine this will be a divisive choice: some enchanted by the twee-ness, others repulsed. Count me firmly in the latter camp, but I admire the chutzpah required to torture the English language like this, displaying its flayed flesh in every menu imperative and casual aside. I emerged in a city of mice men, hocking their wares at a bazaar, to hear one say, “Forget this rat race, this trading zoo,” to which his friend replied, “It’s the fairest, Margaret, I wish to woo.” (That Margaret is apparently the hottest mouse in mouse city comes up a couple times.)

Child of Light tells a story in order to tell you a story.

Later, a character who has endeavored on a hunt for her missing parents discovers that they are in fact dead. Seeking to console her, I say, “Truly sorry about your parents. The hurt,” to which she muses, “It’s a part of me now. I’m like a plant growing in its dirt.” What’s offensive here isn’t the ineptitude of the metaphor in the face of the supreme pain of a parent’s death; it is, rather, the game’s entire attitude toward narrative, which is embodied by its dialogue. We may tell ourselves stories in order to live, but Child of Light tells a story in order to tell you a story, preciously engaging in its storybook conceit. The life and death and, indeed, the empowerment within are all signs toward importance, but at its close the game politely implores you to fall asleep. It pets your face, hoping you enjoyed the rhymes and the trilling violins and the sweet sad deaths. Enjoy the art, little baby, it whispers. Dry your tears. And go the fuck to sleep.

And so mark Child of Light as an unfinished work. Its three-pronged idea remains 33% explored: the world is beautiful; the combat progression is callow; the narrative is so obsessed with its own telling that it never leaves the tunnel. Forget 10 hours; I’d spend a lifetime in this world if only there was something for me to do in it besides hearing these idiots jabber in ABCBBDEE (or whatever) rhyme. The game’s enormous mistake is to surmise that the exposition of a sincere narrative necessarily involves the JRPG’s fetishization of innocence. Xenogears, after all, was about God, not Chu Chu; Earthbound was about America, not Ness. Child of Light, on the other hand, is about being about children. By missing the forest for the trees—so many characters cry that it playfully refers to it as “making dew,” for example—it utterly infantalizes the player. A character named “Monsieur Moustache” is mentioned exactly one time.

Whether or not you’re okay with that is, truly, up to you. I hated being talked to like a child when I was one, and as an adult my feelings haven’t changed. There is certainly room for pure, child-like play in videogames: Nintendo has built an empire on it, and there’s a similar giddiness in the work of Keita Takahashi and many of the best sandbox-style games. But telling the player over and over again that she is a baby is not the route toward this state of cerebral freedom. Last year’s hyper-conservative Ni No Kuni told a similar tale of children and death with grace, simplicity, and heart, but Child of Light is whimsical through brute force; it reaches through the screen and puts a toy crown on your head and tells you that you’re having an emotional experience. I do not want to put finger-quotes around play, nor do I want to be insulted for my desire to engage in it. Actual children, meanwhile, would be better served by another afternoon of Titanfall.